Ex-rabbi Tsion Ben-Judah is apparently the Most Wanted Criminal in all of Greater Israel. He’s being hunted by quasi-governmental “zealots” who want him dead. These zealots already sent black-hooded “thugs” to murder Tsion’s family and his former chauffeur, and the only reason he’s still alive is due to the brilliant quick-thinking of his followers:

“How are you able to elude the zealots?” Buck Williams asks his new friend Michael, who works as an assassin, body-guard and evangelist for Tsion Ben-Judah.

“An escape plan has been in place since the first time Dr. Ben-Judah spoke at Kollek Stadium. For many months we thought the guarding of his family was unnecessary. It was him the zealots wanted. At the first sign of a threat or an attack, we sent to Tsion’s office a car so small it appeared only the driver could fit in it. Tsion lay on the floor of the backseat, curled into a ball and covered with a blanket. He was raced to this very boat, and I took him upriver.”

This may be more weirdly unreal than the tour-boats on the Jordan River or the rebuilt Temple that everyone ignores.

What the authors are suggesting here is that Israel doesn’t have a clue about operating security checkpoints. 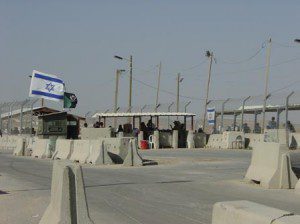 We can laugh at Jerry Jenkins here for sketching such a lazily unimaginative “plan” and for thinking such a scheme would work — curling up on the floor of the backseat under a blanket … genius! — but even though Jenkins was the one who typed this nonsense, I blame his co-author, Tim LaHaye for this.

Tim LaHaye doesn’t know anything about Israel. He’s been talking about Israel for decades. He’s written articles, sermons and books about it. He’s raised millions of dollars to “support” Israel and to lobby Congress on his idea of Israel’s behalf. But he hasn’t got a clue about the actual place as it exists outside of the theological construct in his head. He doesn’t know — or care to know — anything about it’s actual geography, actual people, politics, policies, recent history or culture.

And so Tim LaHaye finds it perfectly plausible that having someone lie down in the backseat of a car, under a blanket, would outsmart the security personnel at any Israeli checkpoint.*

Tim LaHaye’s ignorance about Israel does not come from innocence or naivete — from simply not having heard or learned or paid attention. It’s an ignorance that comes from a fierce determination not to hear, learn or pay attention. LaHaye believes he already has all the truth he needs to have about Israel. It’s right there in the prophecies of the Bible. Anything other than that “truth” might erode or diminish the clarity and certainty he has from the Word of God, and so it is his theological duty not to allow himself to learn anything other than, or anything more than, what he already knows.

Here’s a remarkable video featuring Texas televangelist John Hagee and a panel of his fellow “Bible prophecy scholars,” including David Reagan (the guy who speaks toward the end), discussing Israel and the people who live there. Tim LaHaye isn’t part of this panel, but Hagee and Reagan teach a very similar brand of “premillennial dispensationalism” and preach an End Times check list that closely parallels the one LaHaye uses and teaches in these Left Behind novels:

Hagee and Reagan don’t think they need to know more than what their “Bible prophecy” teaches them about Israel and about “the Jews.” They don’t want to know more than that, because learning anything more might diminish their absolute certainty about what they are saying (which is that Israel will soon pledge allegiance to the Antichrist and that God will slaughter two-thirds of all Jews in a “horrible holocaust”).

It would be difficult to defend Hagee’s little colloquy against the charge of anti-Semitism. They are, after all, speaking about “the Jews” in generalizations so broad and sweeping as to be dehumanizing even apart from the appalling content of those generalizations. And they’re arguing that there’s no point in trying to reason with or talk to or listen to “the Jews” because they’ve already been condemned by God for their future sin of serving the Antichrist. It’s a pretty ugly conversation, all told.

That disregard — like the business about the seven-year treaty to be broken after three-and-a-half years — will be intensely familiar to anyone who’s read the Left Behind series.

LaHaye and these other “Bible prophecy scholars” assert a host of weird misconceptions about Israel and “the Jews.” Scrape away all the pious bromides about “support for Israel” and being “faithful friends” of “God’s chosen people” and you’ll get down to the nasty, determined ignorance you hear in that video or you see in the pages of Nicolae. They don’t know much of anything about Jews or about Israel, but they’re sublimely confident in assuming the very worst.

Similarly, these prophecy scholars don’t know much of anything about other people in general, or about the rest of the world — whether it’s across the globe or down the street. But they’re equally confident in assuming and presuming the absolute worst about all of those people too (as we’ll see when we discuss the following pages next week).

I wouldn’t quite say that we can defend them against the charge of anti-Semitism just because they hate everyone else too. There’s a specificity and intensity to their ignorant assertions about “the Jews” that you won’t find in their dismissive assertions about the rest of us. They don’t care about or care to know about anybody, but this is, for them, especially true of “the Jews.”

Consider, for example, the whole unspoken premise of everything that happens in these chapters: the uncritical assertion that Jews persecute Christians, and that a rabbi who converted to fundamentalist Christianity would be hunted down and slaughtered by zealots with the full cooperation of the Israeli government (or, at least, with their full knowledge and refusal to interfere with his slaying). Even a cursory glance in the direction of reality would expose the monstrous nonsense underlying that premise, but LaHaye’s theology forbids him to make any such glance. His theology forbids him to learn anything about Israel beyond what it “prophesies.”

This harebrained under-a-blanket-in-the-backseat business is thus another example of Bad Writing that arises, in part, from Bad Theology. LaHaye and Jenkins imagine this would work because they don’t see any reason why it wouldn’t. They don’t see any such reason because they’re not looking, because they’re choosing not to look — at Israel, at the people who live there, or at the rest of the world.

We come then to another of those chicken-and-egg questions. Tim LaHaye has a dismissive disregard for everyone who does not fit his definition of a real, true Christian. Does this disregard for others come from his theology, from the way he reads the Bible? Or is that theology a product of his prior, pre-existing disregard for others?

I think it’s the latter. It simply isn’t possible to open the Bible, start reading it “literally,” and come up with a theological scheme like premillennial dispensationalism. It’s too convoluted, dischordant and counter-intuitive a scheme to believe that anyone “found” it in the Bible unless that person was trying and wanting to “find” it there. (See, for example, John Hagee’s intricate discussion above of what the book of Romans has to say about the Antichrist. Then see the actual book of Romans.)

“Bible prophecy scholars” read this disregard for others out of the text because they first projected it into the text, reading it back out as the full authority of scripture. It’s not simply that their understanding of how to apply the text is limited due to this disregard, but that it changes their interpretation of it — changes the meaning of what they read into something that affirms disregard for others as righteous and good. Tim LaHaye went to the Bible looking for something that would reaffirm his callous disdain for the entire world. And so that is what he found there.

* Here’s an extremely unlikely, but theoretically possible, alternative defense of this passage:

Jerry Jenkins spent weeks researching the many ingenius strategems employed by smugglers and spies to cross security checkpoints without capture. He sketched out detailed variations of three such scenarios, writing and re-writing to polish each version of the scene, and then asked his co-author which he liked best.

“These are all brilliant, Jerry,” LaHaye said, “but it would be irresponsible to use any of them.” The scenarios, LaHaye explained, were too good — too effective. “Can you imagine if some would-be terrorist got his hands on this chapter? Everyone knows the IDF is one of the best-trained, most-effective security forces in the world, but you’ve just written a blueprint for how to elude their best efforts to keep their country safe.”

Jenkins sighed and sadly realized his friend was right. All his painstaking research had been for naught. He wouldn’t be able to use any of this.

“What if we went the other way with this?” he suggested. “What if we portrayed some utterly brainless tactic as though it were effective? If some would-be terrorist were to read that, he might try it in real life and he’d be sure to be captured!”

LaHaye laughed. “Oh, that’s great! Write it like a training manual for getting caught! Just have him … I don’t know … crouch down in the back seat or something. …”

“Under a blanket, that’s hilarious,” LaHaye said. “Can you just imagine some idiot trying to get past Israeli security by crouching down in the back seat under a blanket?”