On the whiteness of Al Mohler’s White Theology

Dr. Platypus points us to Ken Schenck’s review of a new book from Zondervan on Five Views of Biblical Inerrancy.

Another title for this book might have been “Five White Guys Discuss the Hermeneutics of White People.” The encouraging thing, though, is that Schenck says four of the five contributors to this volume seem to recognize that, at least somewhat.

The contributors to this book include Southern Baptist Archbishop Al Mohler, Kevin Vanhoozer of Trinity seminary, Australian professor Michael Bird, John Franke of Biblical Seminary, and Peter Enns of Eastern University (they always turn to my alma mater for the token evangelical “liberal”). In Schenck’s reading, the book basically offers Mohler’s ex cathedra presentation of the One Holy and Inviolable Definition of Biblical Inerrancy — his defense of something called the “1978 Chicago Statement on Biblical Inerrancy,” followed by four critiques explaining some of the problems with that view.

“Four of the five authors believe that [Mohler’s stance] is a reflection of 20th-century American cultural categories,” Schenck writes. “The unanimity with which all the other evangelical voices in this book critique Mohler is striking.”

I think these four writers are correct that Mohler’s notion of “biblical inerrancy” reflects “American cultural categories” more than any meaningful attribute of the text itself. But I think they’re wrong to regard this view as primarily due to 20th-century cultural categories.

Schenck parenthetically points that out. But this shouldn’t be left in parentheses, because what Schenck identifies here is the essential fact that shaped white evangelical theology, piety and practice in the 20th century and that continues to shape it in the 21st century:

(It is worth noting that the forebears of this modern form of inerrancy used a different hermeneutic than my church’s abolitionist forebears, and they used their hermeneutic to argue anti-abolitionism from Scripture, just as Mohler uses a similar hermeneutic today to argue against women in ministry.)

And there it is. That, friends, is the whole shebang in a single sentence. 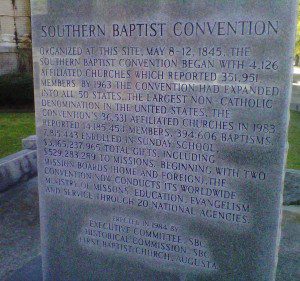 Just look at the very different character of the American Baptist churches compared to that of the Southern Baptist Convention. This is often described as a contrast between “liberals” and “conservatives,” and historical consideration of the split only goes back to about the 1920s and the fights of the fundamentalist-modernist controversy(ies). That’s too short-sighted. This split goes back to the split itself, in 1845, and to long before it. It’s not a matter of liberals vs. conservatives, but of North vs. South. The Northern Baptists, who later adopted the name “American” Baptists, retain the hermeneutic earlier embraced by anti-slavery Christians. The Southern Baptists are exactly that — Southern Baptists, and they retain the hermeneutic earlier developed by white Christians who defended slavery.

The more interesting aspect of this whole centuries-long story, though, doesn’t have to do with the contrasting hermeneutics of pro- and anti-slavery white Christians. The far more interesting thing is the hermeneutic approach of black Christians in America — an approach embraced during slavery that endures today.

Again, the urge to categorize that approach as “liberal” or “conservative” is unhelpful. Whether incidentally or intentionally, it serves only to distract us from what ought to be the main point about the hermeneutics of the Black Church in America: They were right when almost everyone else was wrong.

If you want to be wrong, then train yourself to read and interpret the Bible the same way that people who were wrong did. Those people were not just a little bit wrong, mind you –they were epically, colossally, catastrophically wrong. The hermeneutics of White Theology was a failure in 1845, and it remains an unholy mess today.

It is impossible to understand Al Mohler’s 21st-century idea of “biblical inerrancy” without understanding its roots in the 18th- and 19th-century defense of slavery. That’s what this hermeneutic was created to do. That is the function it has always existed to provide. It is White Theology — culturally bound, culturally created. And it makes no sense at all unless we acknowledge its intrinsic, insistent whiteness.

November 20, 2013 6 years ago: Brave New Media 2
Recent Comments
0 | Leave a Comment
Browse Our Archives
get the latest from
slacktivist
Sign up for our newsletter
POPULAR AT PATHEOS Progressive Christian
1