While I was busy the other day writing a convoluted post about the disproven theologies of Al Mohler and Ken Ham, getting distracted along the way by the fascinating natural history of what is now Kentucky, James McGrath was posting a Facebook image that made the same point more simply and elegantly. 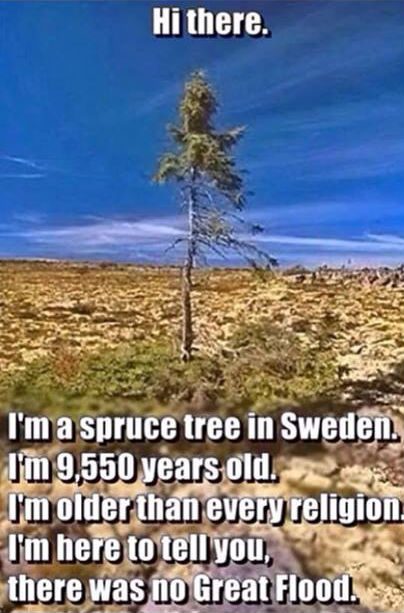 The wit who added the text to this photograph by Norwegian scientist Leif Kullman overstates one claim. This 9,550-year-old spruce is older than any extant form of religion, but it’s not older than “every religion.” We have archaeological and anthropological evidence of religious rituals that are older than that. Those ancient religions matter because they, like this ancient spruce tree, are part of the massive body of evidence disproving the claims of young-Earth creationists that the universe is only 6,000 years old and disproving the claim that the story in Genesis of a global flood should be read as a historical account of an actual event that actually occurred some 4,200 or so years ago.

I do like the first-person text added to Kullman’s photo, because this tree does testify — it speaks, bearing witness to its existence during a history that young-Earth creationists like Mohler and Ham deny ever existed.

The tree doesn’t lie. It’s telling its truth and, at the same time, proving its truth. “Here I am,” it says, and that is undeniably true. The witness of this spruce tree disproves the false claims of young-Earth creationism.

This tree, then, ought to save us a lot of time and energy that might otherwise be wasted on endless theological and exegetical debate.

“If we deny the historicity of Genesis 1, then …”

“Belief in a literal six-day …”

The fact that the fact of this tree, or the fact of the bones of Big Bone Lick, or, say, the fact of this dazzling photograph of the 10-billion-year-old light reaching us from the M15 globular cluster, doesn’t settle this non-debate underscores that facts aren’t the main factor in this conversation.

This isn’t a dispute about the meaning of facts, but rather a dispute about whether or not there can be any such thing as facts. The sort of Christian fundamentalist most likely to embrace young-Earth creationism is also likely to be the sort of person who rails against “post-modernism” and who insists on the essential importance of “absolute truth.” Yet scratch the surface of any young-Earth creationist and you’ll find an epistemology more radically skeptical than anything Hume or any of the French deconstructionists ever imagined. Far from the defenders of “absolute truth” they claim to be, young-Earth creationists actually embrace a philosophy that says nothing can be known about the world around us.

Appearances and measurements lie. Trees lie. Carbon lies. Bones lie. The stars in the heavens lie. And nothing at all can be trusted from what we deceive ourselves into imagining we’re learning from observation, study, experiment and measurement.

Their claim is even more audacious than that. It has to be. They want to say that they’re only disputing the honesty of “science,” but if that were the case, then we could easily test their claim by, say, switching on the light or looking at this page on the Internet. Science seems to work. And thus the epistemological anarchists of young-Earth creationism cannot simply be asserting the unreliability of science, they must also assert the unreliability of seeming. If a universe that seems ancient is not ancient, then both the universe and our seeming must be lying. Nothing we think we see, hear, touch or measure can be trusted. Nothing can be known.

Let me be clear here: This is not something they say they believe, yet this is what they must believe. While they would never explicitly make such sweeping dismissals of all possibility of knowledge, such dismissal is implicitly inevitable in everything they claim.

It’s important to remember here that young-Earth creationists are making two separate sets of claims. On the one hand, they’re making claims about the Bible — about how they insist it must be read for it to be true and meaningful. And on the other hand, they’re making claims about the universe — and thus about whether or not science can be true and meaningful.

People who are unable to read the universe are probably not the best guides to reading the Bible.