“I try to get most of the things my daughter eats because I can hold the hunger — I’m an adult — but she cannot. They don’t understand when there’s no food in the fridge.”

“Nearly 40 percent of all workers in the country made less than $20,000 last year, according to data from the Social Security Administration, which doesn’t include figures on benefits such as health insurance or pensions. … On average, these workers earned just $17,459.55.”

“I already had another job where they requested five days open availability. So there was no way for me to work two jobs.”

“Students poor enough to qualify for free or reduced-price school lunches were a majority of the school population in 17 states across the South and the West in 2011.”

“Food stamps will be cut by somewhere between $4 billion and $40 billion.” 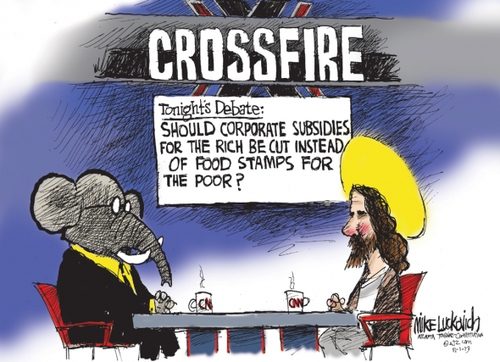 “While annual CEO compensation increased by 726.7 percent between 1978 and 2011, average worker compensation only went up 5.7 percent during the same time.”

“If instead the federal minimum wage had grown at the same rate as one-percenter earnings, it would sit at $22.62 per hour today — 212 percent higher than the current wage floor.”

“Tabarrok can’t understand why people would use layaway. But it’s easy to gain that understanding. Ask some poor people why they use it.”

“Coal companies paid the Baltimore-based university handsome sums to screen the claimants for the disease. After reviewing chest X-rays, the university’s scientists almost always concluded that the scans did not show black lung — a conclusion which often overwhelmed any other medical opinion in the case.”

“Between them, the 90 companies on the list of top emitters produced 63 percent of the cumulative global emissions of industrial carbon dioxide and methane between 1751 to 2010, amounting to about 914 gigatons of CO2 emissions, according to the research.”

“The government’s attempts to meet its obligations to the Native Americans have failed miserably; the primary cause is insufficient funding.”

“We’re going to continue to get poorer and poorer if we don’t have some kind of rent control ordinance inhibiting this curve.”

“The majority of Haitian garment workers are being denied nearly a third of the wages they are legally due as a result of the factories’ theft of their income.”

“The resort is also listed as ideal for team building exercises or theme parties.”