I read that passage from Jesus’ mini-apocalypse as a text about, in part, the inevitability of death. This interpretation has one advantage over other approaches to this passage: It means these verses are true for everyone who has ever read them.

Harold Camping thought he knew how to do that. He spent his long life, including more than 50 years preaching on the radio, talking about eschatology instead of death. That’s how he viewed it — longing for an End Times to come before he was out of time. Every previous generation of Christians who read that passage above was now dead and buried. But not us. For us it would mean something different. “Can you imagine, Rafe,” Irene Steele said, “Jesus coming back to get us before we die.”

But now poor Camping has been swept away and we are left behind.

Harold Camping, the radio preacher who convinced thousands of followers that Jesus would return on May 21, 2011, to usher in the end of the the world, has died, according to a statement released late Monday (Dec. 16) by his Family Radio network. He was 92. 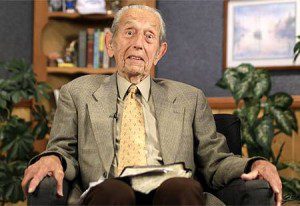 Camping died Sunday evening, an employee at Family Radio confirmed. He had fallen at his home on Nov. 30 and had been in weak health due to a stroke since 2011.

Camping first predicted Jesus’ return in 1994, but his most recent forecasts gained national attention through advertisements and the Family Radio network of stations he founded. He warned that “judgment day” would occur in May 2011 and said the world would end in October 2011.

When his prophecies turned out to be false, he declared in March 2012 that his May 21 prediction had been “incorrect and sinful” and said his ministry would get out of the predictions business.

Pressed by reporters after his May 21 prediction failed to materialize, Camping said he had miscalculated — it must be Oct. 21, he said. “I’m not a genius,” he said. “I pray all the time for wisdom.”

I remember hearing Camping as a kid on WFME or WAWZ back in Jersey. And I remember, too, when we stopped listening to him:

Starting in the 1950s, Camping broadcast his views via Family Radio, a global network of Christian stations for which he served as unpaid president and primary on-air talent. … Camping was once well-regarded in among evangelicals, both for his encyclopedic knowledge of Scripture and his radio network. But in the late 1980s, when he began teaching that churches had strayed from the Bible embracing a false doctrine, he lost much previous support.

He also discouraged his listeners from joining a church, saying modern churches were heretical and that the “church age” had ended as the end of the world was near. He had no formal religious training beyond his tattered copies of the King James Version of the Bible and couldn’t read or speak Greek, Hebrew or Jesus’ native Aramaic.

One problem with Camping’s “encyclopedic” knowledge of the Bible is that the Bible is not an encyclopedia. He thought it was, treating it as an almanac of coded “prophecies” foretelling the future.

When his lifelong desperation to decode those prophecies led him to his disastrous date-detting in 2011, I felt bad for him. He struck me as a true believer. Yes, he was selling snake oil, but I’m not sure he knew it was snake oil.

The pity I felt for Camping then was limited, though, due to the anger I felt for what he had done to his many followers. As Christianity Today reminds us:

The $100 million campaign, which centered on ads that read, “Judgment Day, May 21: the Bible guarantees it,” was funded in part by contributions from hundreds of donors. Most of the funds came from the sale of a television station and a radio station, a Family Radio spokesman said. But some donors sacrificed their life’s fortunes, even jobs, in anticipation for the “guaranteed” end and are now in dire financial straits; others are simply frustrated and in search of recompense.

I wrote about Camping’s victims in May 2011, shortly before the Great Disappointment in which they first realized they were his victims: “Disappointment, despair, and Harold Camping.”

Talk to anyone who grew up in a Rapture-believing church or family and they will tell you stories about panic-inducing moments when they found themselves suddenly alone and feared that everyone else had been raptured while they had been rejected by God. This guy thinks that’s funny, but it’s actually traumatic. That’s why no one forgets the horror of such moments. Laughing at one’s own trauma can be transformational and healthy. Laughing at someone else’s trauma is just cruel.

That fear and trauma, we were sometimes told, was a good thing. It was a holy terror — a reminder to make certain that we prayed the right prayers and felt the right feelings to ensure that we would not be among those left behind. This is what they thought the scriptures meant when they spoke of “the fear of the Lord” — the powerless terror of the child of an abusive parent.

And that terror is what Harold Camping and his followers are feeling now. And it is what they will be feeling again Saturday evening, after that terror and despair first abates, then metastasizes in the realization that the world has not ended and that they are not the righteous remnant they staked their identities on being.

Fortunately, Camping is not as widely influential as LaHaye, so we’re talking about only thousands of followers, not millions. But that’s thousands of people, thousands of families experiencing one kind of trauma now and due for another, existential, shaken-to-the-core trauma come Saturday. That some of this trauma is self-inflicted or that, like most victims of con-artists, they are partially complicit in their own undoing doesn’t change the fact that we’re still talking about thousands of people in pain, fear and despair.

After Camping’s Plan B Rapture date arrived that October, I wrote a follow-up post, “It’s still not the end of the world“:

Poor Harold Camping has spent more time than anyone pondering all those passages about watchfulness and “redeeming the time,” and yet he’s completely missed their message. When his world ends, he’ll be more surprised and less prepared than most.

December 17, 2013
Today is the feast day of William Lloyd Garrison
Next Post