Today is the feast day of William Lloyd Garrison

Kudos to the Episcopal Church for honoring a (sort of) secular (sort of) saint by celebrating today as the feast day of William Lloyd Garrison. 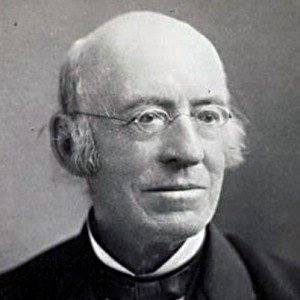 Garrison seems to have been a difficult person to like, but an easy person to hate. That’s partly because he was a prickly, vituperative writer and speaker who did things like burn copies of the Constitution, condemning it as “a Covenant with Death, an Agreement with Hell.” He wasn’t wrong about that. He wasn’t wrong about much of anything.

That’s the problem with Garrison — he was right. The prickly bastard was right. Would he have been more effective if he’d been more winsome, less confrontational, more savvy as a politician? Maybe. Maybe not. We can’t be sure about that either way. But we can be sure of this: he was right, while those he fought against were utterly, horribly, monstrously wrong.

The following is from The Liberator, Garrison’s abolitionist newspaper, which he published from 1831 until the end of slavery. It’s from the “Declaration of the National Anti-Slavery Convention of 1933.” Garrison wrote many such declarations, and most of them said much the same thing. He begins this one by contrasting this convention in Philadelphia with the convention that met there a generation earlier, in 1776:

Their grievances, great as they were, were trifling in comparison with the wrongs and sufferings of those for whom we plead. Our fathers were never slaves — never bought and sold like cattle — never shut out from the light of knowledge and religion — never subjected to the last of brutal taskmasters.

But those, for whose emancipation we are striving, — constituting at the present time at least one-sixth part of our countrymen, — are recognized by the laws, and treated by their fellow beings, as marketable commodities — as goods and chattels — as brute beasts; — are plundered daily of the fruits of their toil without redress; — really enjoy no constitutional nor legal protection from licentious and murderous outrages upon their persons; — are ruthlessly torn asunder — the tender babe from the arms of its frantic mother — the heart-broken wife from her weeping husband — at the caprice or pleasure of irresponsible tyrants; — and, for the crime of having a dark complexion, suffer the pangs of hunger, the infliction of stripes, and the ignominy of brutal servitude. They are kept in heathenish darkness by laws expressly enacted to make their instruction a criminal offence.

These are the prominent circumstances in the condition of more than TWO MILLIONS of our people, the proof of which may be found in thousands of indisputable facts, and in the laws of the slaveholding States.

That in view of the civil and religious privileges of this nation, the guilt of oppression is unequaled by any other on the face of the earth; — and, therefore,

That it is bound to repent instantly, to undo the heavy burden, to break every yoke, and to let the oppressed go free.

It is still today, in some circles, considered rude and confrontational to characterize American slavery as “the guilt of oppression … unequaled by any other on the face of the earth.” But that’s the only thing that matters about Garrison — he was right.