Battling billionaires: Bloomberg vs. Buffett on poverty, luck, and justice

Bloomberg invokes both random “luck” and theodicy — “That’s just the way God works.” He’s not alone in doing so. Theodicy — the question of why evil and suffering exist — is almost always a factor in the way anyone responds to poverty and injustice like that which has defined the world of 11-year-old Dasani.

Harold Pollack also discusses both luck and theodicy in response to Dasani’s story:

Dasani’s story includes savage turns of fate that so easily might have turned out differently. I’m tempted to dismiss the importance of bad luck. Families living near the water line have a way of conspiring in their own misfortune. If Chanel wasn’t arrested on one day, she might easily have been arrested on another occasion — for example the day she shoplifted Dasani’s birthday cake.

But bad luck does actually matter. The worst twist of fate concerned Chanel’s mother, Dasani’s grandmother, Joanie. Stably employed as a municipal worker after her own struggles with addiction. Joanie provided one of the very few sources of personal and financial stability in Dasani’s life. When this indispensable woman died of leukemia at age 55, her family never really recovered. “Why did she have to go away so quickly?” Dasani asked. I found myself asking the same question.

Bloomberg and Pollack both note the role of misfortune, and both lament the mystery of why, in God’s name, such suffering and injustice should occur. But Pollack also asks a question Bloomberg isn’t asking — even though it was his job to ask this question for the past 12 years: “How can we help Dasani’s family?”

That’s not an easy question, as Pollack writes:

No one should claim with any confidence that we could have prevented or can solve the myriad problems that beset Dasani and her family. Some of their problems may not be fixable. But there are things we know we can do. We know Dasani could at least go to sleep in a clean and safe place where her family is secure from strangers’ intrusions or predations. So we should at least do that.

At least that, yes. But we should also avoid the passive-voice passivity of Bloomberg’s “This kid was dealt a bad hand.” Dealt by whom? By “God,” I suppose, because “That’s just the way God works.” But if this kid was dealt a bad hand, what’s stopping us from reshuffling the deck and dealing her back in? And what are these “hands” for, anyway? What are the rules of this game? And who says we can’t rewrite them when we see them hurting children?

“Some of us are lucky and some of us are not,” the billionaire mayor says. “Bad luck does actually matter,” Harold Pollack agrees. And so does Qoheleth:

The race is not to the swift, nor the battle to the strong, neither yet bread to the wise, nor yet riches to men of understanding, nor yet favour to men of skill; but time and chance happeneth to them all.

Time and chance — good or bad “luck” — happeneth to us all. But we don’t have to live in a world governed only by time and chance. We can choose to make our safety, health and wellbeing something that’s not just subject to random misfortune. Civilization doesn’t have to be a casino.

Warren Buffett is one of the very few non-Waltons who is wealthier than Michael Bloomberg. Yet despite being one of the most fortunate people on the planet, Buffett doesn’t think we ought to leave everyone’s fate to mere fortune.

Speaking to a group of MBA students recently, Buffett described what he calls the “Ovarian Lottery,” which is basically his version of John Rawls’ Theory of Justice:

Just imagine that it is 24 hours before you are born. A genie comes and says to you in the womb, “You look like an extraordinarily responsible, intelligent, potential human being. [You’re] going to emerge in 24 hours and it is an enormous responsibility I am going to assign to you — determination of the political, economic and social system into which you are going to emerge. You set the rules, any political system, democracy, parliamentary, anything you wish — you can set the economic structure, communistic, capitalistic, set anything in motion and I guarantee you that when you emerge this world will exist for you, your children and grandchildren. 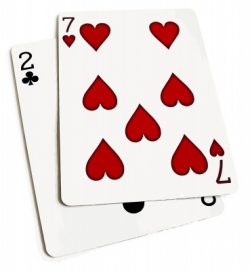 What’s the catch? One catch — just before you emerge you have to go through a huge bucket with 7 billion slips, one for each human. Dip your hand in and that is what you get — you could be born intelligent or not intelligent, born healthy or disabled, born black or white, born in the US or in Bangladesh, etc. You have no idea which slip you will get. Not knowing which slip you are going to get, how would you design the world? Do you want men to push around females? It’s a 50/50 chance you get female. If you think about the political world, you want a system that gets what people want. You want more and more output because you’ll have more wealth to share around.

The US is a great system, turns out $50,000 GDP per capita, 6 times the amount when I was born in just one lifetime. But not knowing what slip you get, you want a system that once it produces output, you don’t want anyone to be left behind. You want to incentivize the top performers, don’t want equality in results, but do want something that those who get the bad tickets still have a decent life. You also don’t want fear in people’s minds — fear of lack of money in old age, fear of cost of health care.  I call this the “Ovarian Lottery.”

My sisters didn’t get the same ticket. Expectations for them were that they would marry well, or if they work, would work as a nurse, teacher, etc. If you are designing the world knowing 50/50 male or female, you don’t want this type of world for women — you could get female. Design your world this way; this should be your philosophy. I look at Forbes 400, look at their figures and see how it’s gone up in the last 30 years. Americans at the bottom are also improving, and that is great, but we don’t want that degree of inequality. Only governments can correct that. Right way to look at it is the standpoint of how you would view the world if you didn’t know who you would be. If you’re not willing to gamble with your slip out of 100 random slips, you are lucky!

December 20, 2013 6 years ago: Road to ruin
Recent Comments
0 | Leave a Comment
"Well, "revolutionary" isn't a superlative adjective - most mainstream ads are no longer able to ..."
Jim Roberts Much obliged
"It's like ad copy. You can't say "this is a perfectly nice car, sure it ..."
SmogMonster Much obliged
"That fits pretty darned well - one thing I've noticed since the beginning is his ..."
Jim Roberts Much obliged
"Yeah, you definitely can't say that in American English. To pass as acceptable usage here ..."
SmogMonster Much obliged
Browse Our Archives
get the latest from
slacktivist
Sign up for our newsletter
POPULAR AT PATHEOS Progressive Christian
1