The cost of reading every book: We know their names

The cost of reading every book: We know their names December 22, 2013 Fred Clark

Randall Munroe turns to the question of Reading Every Book: “At what point in human history were there too many (English) books to be able to read them all in one lifetime?”

Munroe tackles this question, as usual, with plenty of amusing math.

Elsewhere, I’ve seen it said that the last people who might have read everything were probably Thomas Jefferson (d. 1826) and Johann Wolfgang von Goethe (d. 1832). Whether that’s true of either I don’t know, but Jefferson certainly tried. Jefferson’s problem was that Virginia did not have a library that held every English book, so to read them all, he had to buy them all. That was expensive. It took more money than Jefferson had, so the acquisition of his vast personal library put him deep into debt.

That debt was part of the reason, or the excuse, Jefferson gave for never being able to afford the emancipation of his slaves — something he always said he wanted to do, yet somehow never quite got around to doing. 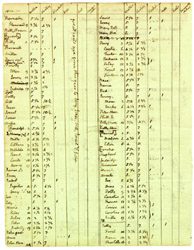 We know their names. The image here is a page from Jefferson’s 1820 “Farm Book,” listing the enslaved persons he and the law said he “owned” in that year. That image is too small for the names to be legible, but they’re all there on the page in the archives of the University of Virginia — the real names of real people who were bought and sold, and whose children were bought and sold, and who died without ever tasting freedom because Jefferson’s book-buying habit meant he could not “afford” to keep his promise to them.

Jefferson tried to break that habit, to settle his accounts and to pay the greater debt he owed to all the enslaved people whose labor he had stolen. In 1814, he sold his library — more than 6,000 books — to the government for about $24,000. But then, instead of the Jubilee he had considered, he started buying more books, got deeper into debt, and never liberated his slaves, who were sold at auction after his death in 1826.

As Randall Munroe’s math shows, it’s no longer possible to do what Jefferson tried to do. There are just way too many books to read them all. But the Library of Congress still tries to collect them all, and to catalog every one.

Open any book you own and flip through the first few pages and you will find that book’s Library of Congress number. When you see that number, remember where the Library of Congress came from. It came from a broken promise to real people — the people whose names are listed in Jefferson’s handwriting on that page above. We know their names.