1. The New York Times’ interactive regional dialect quiz is fun. Since I wore sneakers on mischief night as a kid, the quiz figured out I was from Jersey. But since I moved away for college and developed a taste for hoagies, the quiz also figured out where I live now. Pretty clever. 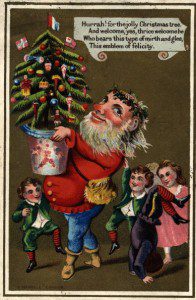 2. You can’t beat the common cold.

3. “This is exactly what Hitler did in Nazi Germany,” said American Family Association radio personality Sandy Rios. Which of the following was Rios referring to?

Yes, that’s an unfair question, because Rios and the AFA have said that all of these things are exactly like “what Hitler did in Nazi Germany.” But in this particular case the answer was “E.”

As we all know, Jesus doesn’t want big government feeding people, because some of the hungry might be bad people, and also because it gets in the way of people expressing their love for Jesus by volunteering on their own to feed people. And as anyone knows, we don’t need no stinkin’ government, because private individuals are always best at addressing local problems, with their can-do spirit and such. Like in Lafayette, Indiana, where Cherrie Buckley, owner of the Buttery Shelf Eatery, served free meals to all comers every Thursday, helping out the less fortunate and easing the burden on local food banks as well. And she didn’t ask for any praise or recognition, just wanted to do her part to help her community with individual initiative and a spirit of giving. And the free market saw this act of kindness and spoke clearly: other nearby businesses told Buckley to get rid of those smelly unsightly poor people, because they were terrible for business. And so Buttery Shelf announced in September that it was ending the free Thursday lunches, because while fighting hunger is nice, fighting bullies with lawyers is a real drag.

5. Richard Beck: “The ‘War on Christmas’: On Ethnocentrism and Blasphemy”

America never was a “Christian nation.” America was founded upon genocide and has chattel slavery enshrined in the Constitution. If anything, that makes our founding document satanic. Slaves built the White House and the US Capital for goodness sake.

What is being “lost” in our nation isn’t Christianity but white hegemony. …

This portrait of the kingdom echoes through Luke’s gospel. The good, upstanding, righteous people refuse to attend the Master’s banquet. They have no beef with the Master. In theory, they love and respect the man. But they object to his guest list. It’s not exclusive enough. In fact, it isn’t exclusive at all. And who wants an invitation that everybody in town also receives simply by virtue of being human? Where is the honor in that? Where’s the distinction?

7. Here’s one of my favorites from Bruce Cockburn, “Cry of a Tiny Babe.” He’s got help in this rendition from Rosanne Cash and, well, just listen to the second verse, that voice is unmistakable.