Time for the ‘let the churches handle it’ crowd to fish or get off the pot: 1.3 million unemployed lose their lifeline

Time for the ‘let the churches handle it’ crowd to fish or get off the pot: 1.3 million unemployed lose their lifeline December 31, 2013 Fred Clark

So this happened: “A Lifeline Just Ran Out for 1.3 Million Unemployed People.”

On Saturday, federal unemployment benefits for the long-term unemployed will expire, leaving 1.3 million people without the support they’ve been relying on as they have searched for new work for about six months or longer.

The federal program kicked in for those who exhausted their state-level benefits, which usually run out at around 26 weeks. But Congress failed to reauthorize the program before the end of the year, as it has 11 times since it was first enacted in June 2008 under President George W. Bush, so those benefits have run out. Another 850,000 workers who will exhaust their state benefits and would have turned to the federal program in the next three months will also be left without support. In total, more than 4 million people have been out of a job for more than 27 weeks, making up nearly 40 percent of all the unemployed.

Why is it that “more than 4 million people have been out of a job for more than 27 weeks”? It’s because there aren’t enough jobs to go around. We’ve still got more than three job-seekers for every existing job opening. These folks can’t just get a job because there are more of them than there are jobs to be gotten. We need more job openings — we need more companies to start hiring more people. But they can’t hire more people until demand for their goods and services increases. 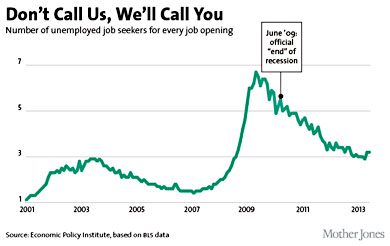 Anyway, we’ve now got a humanitarian emergency on our hands. More than a million families are immediately at risk of hunger and homelessness.

It’s possible that Congress will fix this. President Obama has called for lawmakers to reauthorize federal unemployment insurance benefits for those who need it. The resentment-driven tea party faction in the House doesn’t want to allow a vote on that — they derive too much enjoyment from pretending to be jealous of the lucky-duckies who have been denied employment for so long. But still, it could happen.

But what if the politics of resentment wins? What if the tea partiers prevent the House from reauthorizing this lifeline for the jobless and those 1.3 million American families are left with no means of paying for anything?

Well, some people seem to think that would be a Good Thing, because it would allow private charity to step up and meet this need. In this funhouse-mirror inversion of reality, private charity’s rightful responsibility has been usurped by government, thereby preventing it from solving the problem of poverty once and for all.

Many of the people advocating this theory are religious leaders — church people who criticize government for not “allowing” the churches room to care for the poor and the jobless through private charity. Here’s their chance to put their money where their mouth is. Here’s their chance to prove they’ve been speaking truth and not just spouting hateful anti-poor garbage.

Let’s see these religious leaders step up and replace federal unemployment benefits for 1.3 million families. This is their moment: Fish or cut bait. Shit or get off the pot.

Step up now, or accept that from now on, no one, anywhere, ever ought to take a word you say seriously ever again.

* Answer: It decreases demand. Duh. And what is the effect of decreasing demand by eliminating 1.3 million customers? “Its expiration is expected to have far-reaching ramifications for the economy, cutting job growth by about 300,000 positions next year and pushing hundreds of thousands of households below the poverty line.” OK, then.

January 1, 2014 7 @ 9: Bailey Park is in your heart
Recent Comments
0 | Leave a Comment
"Liz Lemon is the protagonist of 30 RockLa Le Lu Li Lo is the Metal ..."
Ross Jan. 19 Flashback: Leggings
"Water is wet"
Seed of Bismuth Postcards from the class & culture ..."
"Possibly this... https://bikiniarmorbattleda..."
Marja Erwin Postcards from the class & culture ..."
"I'M SO HAPPY HAPPY HAPPY HAPPY HAPPY ALL THE TIME"
Jenny Islander A spy in the house of ..."
Browse Our Archives
get the latest updates from
slacktivist
and the Patheos
Progressive Christian
Channel
POPULAR AT PATHEOS Progressive Christian
1