“Everything about the actions of the core Tea Party faction in the House suggests people who think they’re living in heroic times, zero compromises, whole histories at stake — a right wing version of the world many New Left protestors were living in in the late 60s and early 70s, a mix of high histrionics, deep commitment and performance art.”

“Those who are so damn eager to speak against the so-called sin of homosexuality would be best to remember the sin of lying, speaking ill of one’s brother, or bearing false witness.”

“The groups appealing the decision relied in part on Justice Scalia’s dissent in Lawrence.”

“There is no analog among Democratic politicians — certainly those considered possible serious candidates for president —consorting with people as ‘out there’ as David Barton and Federer and White and AFA founder Don Wildmon (another speaker in Columbia) and Lane and Lord knows who else.” 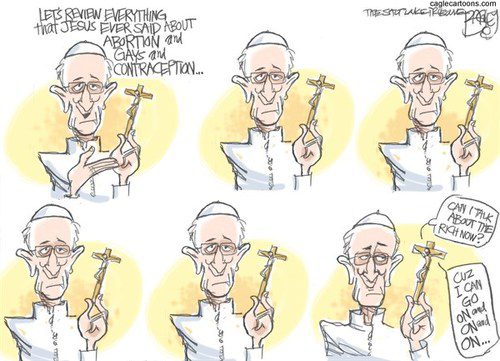 “As Kennedy, a Roman Catholic, was pursing the Democratic presidential nomination in 1960, Hunt secretly financed the printing of 200,000 copies of an anti-Catholic sermon by the Rev. W.A. Criswell, the influential pastor of First Baptist Church in Dallas.”

“It’s comforting to dismiss the paranoid strain in right-wing ideology as the work of an inconsequential fringe, but one need only take stock of the questions asked of Kerry by committee members to see how deeply such outer-orbit groups as the John Birch Society and the Christian Reconstructionist Chalcedon Foundation have come to influence U.S. politics.”

“Driscoll’s views of men and women fit right alongside what many seminarians are being taught in the United States, and what many parishioners hear on Sunday morning.”

“One of the saddest and most damaging consequences of the Religious Right’s grip on partisan power over the past three decades has been the tarnishing of Christianity.”

“That’s a lot of granite — and a lot of misdirected spite!”

“All I see is an aggressive campaign against Christianity in general, it’s amazing to me in this day and age where Muslims get soft pedaled and Christians are under attack.”

“Himes claimed he was the victim of ‘selective prosecution’ by the state auditor’s office due to his conservative religious views.”

“You can’t credibly preach that God is love, that God’s love embraces everyone, that everyone is made in the image of God and deserves respect as a result, while singling out gay human beings for special condemnation. You can’t do this and expect people to listen seriously to your ‘gospel’ message.”

“He likens his work to the nation’s civil rights movement, a comparison he doesn’t make lightly. Talbert, now 79, shared an Atlanta jail cell with Martin Luther King Jr. in October 1960 after being arrested at an Atlanta lunch counter sit-in.”

“The rest of the church will not miss them.”

“Sure does suck when the wedge issue turns you into the fulcrum, doesn’t it?”