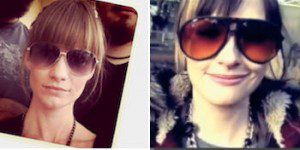 2. My mistake, that’s not Jamie the Very Worst Missionary in Kacey Musgraves’ “Merry Go ‘Round” video. (It’s not just the glasses and the hair. It’s also the sardonic wit and the hopefulness creeping out around the edges of what at first seems like fatalism. And also the glasses.)

3. So I’ve been watching The Misfits on Hulu. It’s a dark, funny, sometimes-disturbing re-imagining of superhero stories with R-rated language, sex and violence (“Can we please stop killing our probation officers?”). And one of the ads running on Hulu during the show is for Liberty University’s online programs. I’m trying to grasp the logic of this. Is there a big overlap between people who enjoy sordid British sci-fi comedies and people looking for right-wing fundamentalist Christian degree-completion programs?

4. Mark Evanier has the Turner Classic Movies year-end memorial video “TCM Remembers.” The cable channel always does a better job with those than the Academy Awards version.

5. “Last year, a group of around 15 credit card issuers paid a total of more than $50 million to various schools and school-affiliated organizations in order to market credit cards to people at those educational institutions.” Absorb that. These lenders expect to make so much money in fees and interest on their loans to college students that $50 million in advertising is, to them, a worthwhile expense.

It’s pretty disgusting that colleges are so willing to take this money, but then I guess it’s not surprising that colleges aren’t concerned about screwing their students over by saddling them with debt since that’s also become their own business model.

That tradeoff between lower inflation and higher employment is almost never discussed. As it often happens, the terms of the debate have been set by those with wealth and power — and a news media that too often reflects their concerns. Baker and Bernstein write that if the policy choice was better understood, “few would agree that it is appropriate to keep millions out of work and deny wage growth to tens of millions simply to reduce the risk of modestly higher inflation.” And if the Federal Reserve panicked over its failure to achieve full employment as it does about slight rises in inflation, we’d be living in a very different economy.

7. The Belle Jar: “Virginity Is a Social Construct”

Virginity is not a thing. Not really. It is a social construct meant to make people, especially women, feel badly about their sexuality and sexual experience. It is a way of policing other people’s bodies and passing judgment on how they use them. It is, at its very core, a way of controlling and subjugating women.