NRA: Counting on a miracle

The tale of Buck and Tsion’s thrilling escape is not hackwork. Hackwork would have been a great improvement over this.

If Jerry Jenkins were merely a hack then he could have done what hacks do in situations like this, ripping off ideas from popular stories and relying on all the standard clichés and stock tropes.

Tsion Ben-Judah is a wanted man and Buck Williams has to help him escape his would be captors/killers and get safely across a guarded border. You’ve read that story before. You’ve seen that story many times. People enjoy this story when it’s well-told and do their best to enjoy it even when it’s not well-told. If you’ve thought up some new twist or wrinkle in this story, then by all means get writing because you’ll probably make a fortune. But even if you haven’t got any new ideas at all, you can probably do pretty well retelling or repackaging this story just by borrowing/stealing various elements from previous versions and mixing them together in some new-ish combination.

That’s what a hack would do here, but, alas, Jenkins doesn’t even do that much. He doesn’t even give us the scene with the map. 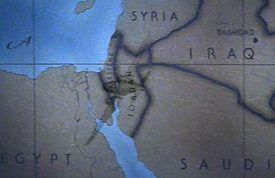 The scene with the map sets the stage for everything that follows it in this kind of escape story — just like the scene with the blueprints does in a heist story or in an assault-on-a-fortress story. Somebody pulls out a map or some blueprints and explains what it is the heroes are trying to do and the various, seemingly insurmountable obstacles that stand in their way. (Preferably, this scene won’t also include all the details of how the heroes plan to overcome those obstacles, saving those for a surprise later on. Such details should only be mentioned if the plan later goes awry. The person with the map/blueprints probably shouldn’t say something like, “The whole plan hinges on Johnson disabling the alarm in Sector 12” unless Johnson is later unable to disable the alarm in Sector 12.)

It’s possible to tell this story without including the scene with the map for the readers/viewers, but storytellers at least have to include it for themselves. Otherwise you end up with the kind of wet-noodle mess that Jenkins gives us here: Buck and Tsion are somewhere and they need to get somewhere else somehow because someone is after them for some reason.

And none of those “somes” ever gets summed up.

Buck Williams does not have a map because Jerry Jenkins does not have a map. That’s also why Buck doesn’t know where he’s going or how to get there. So Buck/Jerry just start tossing out ideas in the hopes that they’ll stumble across something that might work.

Buck’s Plan A: Take a boat from the Jordan River to Egypt. As we saw in our last installment, this is impossible even in the Escher-esque geography of Left Behind.

Michael’s Plan B: Avoid border crossings when crossing the border and wait for a miracle.

“You’re wondering? I’m not wondering. We either avoid the border crossings or seek yet another supernatural act.”

“I’m open to any suggestion.”

You’ll notice that the main problem with this plan is that it doesn’t actually include a plan. Our heroes eventually notice this too, so they get back to brainstorming.

Michael’s Plan C: Use Michael’s old school bus to sneak across the border into the Sinai desert.

“Can you drive a stick shift, Buck?” Michael asked.

“I’ve got an old school bus that smells of fish and paint. I use it for both professions. It’s on its last legs, but if we could get you down to the southern mouth of the Jordan, you might be able to use it to find a way across the border into the Sinai. I’d stock you with petrol and water. That thing’ll drink more water than it will gasoline any day.”

We get another half page of engine talk, then more details of Michael’s plan:

“I sell you the bus, fair and square. You get all the paperwork. If you get stopped, the tags are traced to me, but I sold the bus.”

“You hide Dr. Ben-Judah under the seats in the back. If you can get him across the border and into the Sinai, that bus should get you as far as Al Arish, less than 50 kilometers west of the Gaza Strip and right on the Mediterranean. … There is an airstrip there, and it’s unlikely the Egyptians will care about a man wanted in Israel. If they even seem to care, they can be bought.”

Wait — so Jordan, Lebanon and Syria were all peacefully and cheerfully annexed into Israel at the beginning of our story, and since then every national border in the world other than those of Israel has been erased to form the “Global Community” of the Antichrist’s one-world government, but the Gaza Strip still exists?

Michael’s plan actually includes a few elements of the scene with the map. He mentions locations and distances and a mode of transportation — that’s good. But there’s still a big hole in the middle of this plan for getting across the border into Egypt. He offers Step 1: Drive the bus to the Egyptian border. And he offers Step 3: Drive from the Egyptian border to an airstrip on the Mediterranean.

Michael’s Plan C (revised): Maybe Buck could bribe the border guards to get Tsion into Egypt.

“Israel might have already announced a huge ransom for the rabbi. Unless you could beat their price, the Egyptians might lean toward selling him back.”

“How will I know the price?”

“You’ll just have to guess. Keep bidding until you can beat it.”

“What would be your guess?”

“Not less than a million dollars.”

“A million dollars? Do you think every American has that kind of money?”

“No! And anyone who did wouldn’t carry it in cash.”

“Would you have half that much?”

Buck shook his head and walked away.

Again I’m confused by the fluctuating continuity of the Antichrist’s OWG. Everybody is using dollars because the Antichrist has declared dollars to be the Global Community’s one-world currency. And everybody (outside of Israel) is speaking English because the Antichrist has conveniently declared English to be the Global Community’s one-world language. (“Ladies and Gentlemen: In the interest of clarity and sanity, the rest of this movie will not be in Polish.”) But Buck and Michael are still talking about “the Egyptians” and the border with “Egypt” — as though that nation still existed as an independent state and hadn’t been swallowed up into the Global Community.

Probably best not to think about that too much, because that would just lead to remembering that this whole escape-to-Egypt subplot is occurring while the Antichrist is also gleefully nuking Cairo.

So Buck walks away, despondent, because he still doesn’t have any plan for getting Tsion safely across the border into the smoking post-nuclear wasteland of what used to be Egypt. On the plus side, though, he’s apparently the proud new owner of an ancient school bus that smells of fish and paint, so he’s got that going for him.

He slipped down into the hideout. Tsion followed. “What’s troubling you, my friend?” the rabbi said.

“The Lord will make a way somehow.”

“Yahweh is the God of the impossible,” Tsion said.

And thus we have —

In practice, that amounts to — Oh well, let’s just head for the border and hope for the best.

Buck is understandably worried that this plan still sounds an awful lot like not having a plan. And so, a bit later, he proposes —

“You know,” he said, thinking. “I have two sets of identification. I’m in the country under the name of Herb Katz, an American businessman. But I have my real ID as well.”

“So, how ’bout we get me across the border as Herb Katz and the rabbi as Cameron Williams?”

“You forget, Mr. Williams, that even we ancient, dusty countries are now computerized. If you came into Israel as Herb Katz, there is no record that Cameron Williams is here. If he’s not here, how can he leave?”

“All right then, let’s say I leave as Cameron Williams and the rabbi leaves as Herb Katz. Though there is no record of  my being here under my own name, I can show them my clearance level and my proximity to Carpathia and tell them not to ask any questions. That often works.”

“There’s an outside chance, but Tsion Ben-Judah does not speak like an American Jew, does he?”

“And he does not look in the least like you or your picture.”

Buck was frustrated. “We are agreed that we have to get him out of here, aren’t we?”

But everybody else — the authors included — is at an end as well. They have no Plan G, so they’re stuck with Plan D: “The Lord will make a way somehow.” Head for the border and pray.

That seems unlikely to work, but it has to work, because Buck has to get Tsion across that border.

And it has to work because it turns out that “The Lord will make a way somehow” is also Jerry Jenkins’ plot outline.

January 10, 2014
When we say that some white evangelical leaders are delusional and/or disingenuous political hacks, this is the kind of thing we're talking about
Next Post