This isn’t complicated or difficult. This is Christianity 101. This is humanity 101.

That’s it. Those are the only options.

Well, those are the only options if you want to be a decent human being and not a jerk. Being a jerk and refusing to be a decent human being is always an option, I suppose, and if you want to go that route then, by all means, feel free to ignore the pain of the people being harmed, refuse to protect them, or even cheer on those who are doing them harm. You can do that. Doing that is a possible thing that you can possibly do.

But you can’t do that without being a jerk — without embracing jerkitude, placing the crown of jerkhood upon your head and transforming yourself into a complete and utter jerk. That’s just how it works. 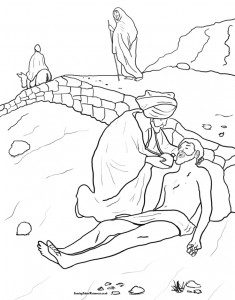 And that’s why the Duck Dynasty affair was a huge deal. It was a test for the Christian church. It was an incredibly easy test for the Christian church. And the white evangelical church in America failed that test. Completely, utterly failed. The overwhelming majority of white evangelicals did not respond as pastors and they did not respond as prophets. They responded as jerks.

Some were loutish, brutish jerks, cheering for the bullies, chanting “Give us Barabbas!” and piling on to multiply the harm being done to the vulnerable and the powerless and the least of these. Some were smarmy, supercilious jerks, refusing to side with the victims by pretending they were above taking sides and that bystanders are morally superior.

Either way: not pastors, not prophets. Just jerks.

That matters. That does real harm to real people.

And when white evangelicals pull that crap — again and again — and say they’re doing it in Jesus’ name that matters too. It makes Jesus’ name a banner for jerks.

Many people passed the test. Many people were decent human beings instead of jerks. They saw harm being done to others (or to themselves and to others) and they either rushed to protect and support the victims or they rushed to condemn and prevent further harm being done. Most of those people who responded as either pastors or prophets were not white evangelicals. Many were not any kind of Christian at all. But for Christ’s sake their response looked a lot more like Jesus than the giant Jesus-Jerkfest the majority of white evangelicals were celebrating — celebrating, because they seemed to think of kicking down at the vulnerable as some kind of victory.

I’ve collected a bunch of the better pastoral or prophetic responses — examples of people who passed this test, and I’ll be posting a few round-ups of those this week.

But first I want to direct your attention to Rachel Held Evans’ important post today on what it means when white evangelicals so badly flunk such an easy, basic test: “When evangelicals support Phil Robertson …”

“Rather than writing about this myself,” Rachel says, “I thought I’d open the floor to some Christian brothers and sisters who can explain what evangelical support of Phil Robertson communicates to them.”

And she does. And they do. And I pray to God that someone is willing to listen.

“I wonder how we worship the same God, when Phil Robertson’s God seems to hate gay folks and be perfectly fine with the subjugation of Black folks (and women),” Brittany Cooper writes. “When evangelicals support him and his offensive views, they make it clear that they don’t support me, a fellow Christian.”

When evangelicals support Phil Robertson, it tells me that they want me gone, that they’ll do whatever it takes to scare me away. They will ‘stand with Phil’ in comparing me to alcoholics and terrorists and those who have sex with animals. They will whip social media into a storm I cannot outrun. …

When evangelicals support Phil Robertson and his comments, it tells me we’ve grown to love our positions more than people. As an African American woman, it tells me that the Church is not interested in Calvary-like reconciliation; we’d rather stop short at empty words of “I’m with the blacks” and insensitive generalizations like “they were godly; they were happy” and uneducated assumptions that, because you have not heard, seen, or have been party to mistreatment, it doesn’t exist.

January 14, 2014 Today's Daily Blog of the Day: Whedonesque
Recent Comments
0 | Leave a Comment
"Back in the pre-2000 era, I read a fair amount of Clancy, but drifted away ..."
Overton Vaxx and facts
"One really interesting thing I learned from Beau of the Fifth Column was that profile-wise, ..."
Ymfon Vaxx and facts
"It starts from "you can't tell me what to do, you aren't smarter than me. ..."
Cobalt Blue Vaxx and facts
"What I don't understand why it took so long for it to come out - ..."
stewart Vaxx and facts
Browse Our Archives
get the latest from
slacktivist
Sign up for our newsletter
POPULAR AT PATHEOS Progressive Christian
1