I’m worried for my evangelical brothers and sisters in Indiana. It seems that the pastors there are in the habit of regularly assaulting members of their congregation, vandalizing property and making terroristic threats to the community.

I haven’t seen any such stories in the news, mind you, but the “pro-family” religious conservative group Advance America assures us that this is happening all over the Hoosier State. And if we can’t trust the spokespeople of the religious right to tell us the truth, then who can we trust?

See, Advance America has been distributing flyers warning the good church-going people of Indiana that their pastors would be put in jail if LGBT people in the state are granted legal protection from hate crimes.

“A pastor that preaches what the Bible says about homosexuality could be prosecuted as a criminal under a hate crime law resulting in jail and fines,” the flyer says, ominously. 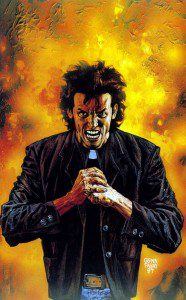 And that is terrifying. That is the worst news for American Christians I have heard in a long time.

Because that can only mean that Bible-believing pastors in Indiana are habitually beating people up, destroying property and threatening others with violence.

That’s the only way a pastor’s anti-gay sermon could be punished as a hate-crime — if he were delivering that sermon while also committing another criminal offense.

We know this because that’s what hate-crimes legislation itself says.

And we know this because Fred Phelps is a free man. Phelps, the infamous leader of the cult-like Westboro Baptist Church, routinely says the most vile, hateful, disgusting things about LGBT people. And yet he’s never been sent to jail for a hate crime because that’s not how hate-crimes work.

As Zack Ford explains: “Hate crimes laws only apply to behaviors that are already designated as crimes, so no speech would ever be impacted.”

That can only mean one thing.

That can only mean that Advance America knows that pastors in Indiana are already routinely committing “behaviors that are already designated as crimes” and that they are apparently doing so on Sunday mornings during their sermons.

Preaching even a really nasty anti-gay sermon is not a hate crime unless the person preaching it is also, at the same time, committing some act of violence or property destruction targeting LGBT people. If what Advance America is saying is true — if they are good, trustworthy people and not fools or liars — then it must be the case that this is what many pastors in Indiana are now doing.

I don’t know why these violent men of the cloth are not already in prison for multiple counts of assault, but if they’re not already committing such assaults, then they couldn’t possibly be thought to be in jeopardy from hate-crime legislation.

It’s quite a pickle.