On religion and human rights

Ari Kohen writes and edits the Tumblr blog Running Chicken. I consider that a prestigious title on its own, but Kohen also is the director of the Forsythe Family Program on Human Rights and Humanitarian Affairs at the University of Nebraska, Lincoln, which probably looks a bit more impressive on his c.v.

Anyway, when the sign on your office door says you direct a program on human rights, then people ask you questions about human rights, which happened to Kohen recently at Running Chicken.

“What are your feelings on the legitimacy of natural rights outside of a religious framework?” he was asked.

That’s a good question. It’s an important question. But it’s also kind of a trick question.

Kohen refers us to Emory law professor Michael Perry, who Kohen says argues that “all of the non-religious reasons” for human rights claims “either fall well short of providing a solid foundation for human rights or are unintelligible.”

[Perry] begins his argument with a quotation from R. H. Tawney, who argues that “The essence of all morality is this: to believe that every human being is of infinite importance, and therefore that no consideration of expediency can justify the oppression of one by another.” Clearly, here, we have an articulation of the basic idea of human rights, that the human person is inviolable. Tawney continues, however, by noting that,“to believe this it is necessary to believe in God.” 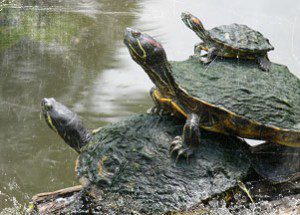 Two huge problems arise when we get this backwards as Tawney does:

2. We mistakenly conclude that every adherent of that religious/sectarian framework shares a commitment to human rights. And that — as a matter of objective, measurable fact — is not the case. Perry and Tawney are correct that it ought to be the case, but it ain’t. Not by a long shot.

And here’s another big problem: the whole project that Perry and Tawney are engaged in here doesn’t solve anything. It endorses a turtles-all-the-way-down answer, and that’s no answer at all. (I haven’t read Perry or Tawney, so I’m trusting here that Kohen is representing them accurately.) The thrust of that argument, as summarized by Kohen, is this:

On Perry’s reading, all of the non-religious reasons either fall well short of providing a solid foundation for human rights or are unintelligible.

Kohen raises a similar objection. He puts it this way:

The argument I make in my book [In Defense of Human Rights: A Non-Religious Grounding in a Pluralistic World] is that in a pluralistic world – one in which most people do not hold the same religious worldview and many hold worldviews that would not fit within Perry’s definition of “religious” – a wider framework is needed, not a narrower one, to ground the idea of human rights.

This is, of course, quite different from showing that Perry is incorrect about religion providing a compelling grounding for human rights and I do not think he is. The language of rights can certainly find a solid foundation in many of the world’s great religious texts, especially – as Perry notes – the Christian Gospels. The language of love and respect for the other, as well as of the equality of persons, provides a strong justification for the belief that people ought to be treated with respect and compassion, and that they ought not be abused or otherwise harmed.

Let me underscore that second point: Perry is certainly right that religion can and ought to provide “a compelling grounding for human rights.” And the Christian Gospels do, indeed, offer “a solid foundation” and “a strong justification for the belief that people ought to be treated with respect and compassion, and that they ought not be abused or otherwise harmed.”

But that’s insufficient as a basis for universal human rights. It’s insufficient first because, as Kohen says, ours is a pluralistic world “in which most people do not hold the same religious worldview.”

And — more importantly and more troublingly — it’s insufficient for another reason Kohen doesn’t address: Most of those who purport to believe in the Christian Gospels do not see them as providing a “strong justification for the belief that people ought to be treated with respect and compassion, and that they ought not be abused or otherwise harmed.”

So where does that leave us? If religious claims cannot provide a sufficiently compelling basis for human rights then where can we turn for a compelling foundation?

Well, Kohen argues for “Human Rights by Consensus.” The link there is to a post in which he summarizes the argument of his book. It’s good stuff, but it’s a bit thick for us laypeople (lots of Habermas and such).

It’s easy to imagine other values for the term “God” that would render everything Tawney is saying obviously wrong. Try this, for example:

The essence of all morality is this: to believe that every human being is of infinite importance, and therefore that no consideration of expediency can justify the oppression of one by another. … To believe this it is necessary to believe in Cthulhu.

** Per Kohen, Perry doesn’t argue for a single, particular sectarian religious basis, arguing instead that all religions tend to provide some basis of support for human rights: “This connection might or might not be as explicit in other belief systems as it is in Christianity, but Perry argues that it is assuredly present in each because the concept of a religious worldview has similar features across the many diverse world religions, despite some differences in expression and application.”

C.S. Lewis makes a similar argument, tracing what he calls the “Tao” of a common notion of justice and the Golden Rule that can be found at the heart of almost every disparate-seeming religion. One (of several) problem with this approach is, again, that in real, actual practice, a great many adherents of all those religions — perhaps even a plurality or a majority of them — do not seem much concerned with this Tao that Lewis insists they all believe. That suggests, perhaps, that Taoists — in Lewis’ sense — might be better understood as a kind of separate religion distinct from all their various nominal religions. This makes descriptive sense — a Sufi, an atheist, a Wiccan and a Presbyterian who are all deeply committed to the Golden Rule would seem to have far more in common with each other than with Sufis, atheists, Wiccans, Presbyterians, etc., who do not share such a commitment. But that suggests all sorts of implications that Lewis himself would have vehemently rejected. That is not at all what he was trying to suggest.