People Get Ready: St. Paul at the Grammys

Last night’s Grammy Awards were quite a show. Some collaborations that could have gone really wrong instead proved kind of brilliant: Stevie Wonder and Daft Punk, Kendrick Lamar and Imagine Dragons, Metallica and Lang Lang, Paul and Ringo, Lorde and a Weeping Angel. Pink’s high-flying circus act nearly lived up to her performance of that same song at the AMAs in 2012. (Nearly — go watch that AMA performance again. Wow.) And it was fun to see Kacey Musgraves emerge from the pyrotechnics and smoke to sing her sweet little song.

But the moment it seems everybody’s talking about today was the Big Number with Macklemore & Ryan Lewis, Mary Lambert, Madonna, Queen Latifah and 34 couples exchanging wedding vows right there on the teevee.

It was moving and lovely and ambitious, and I can’t help but celebrate a pop-culture moment that results in proven liar Todd Starnes tweeting that “The Grammys mock God, marginalize the Bible” at the very moment that Mary Lambert is belting words written by the Apostle Paul. 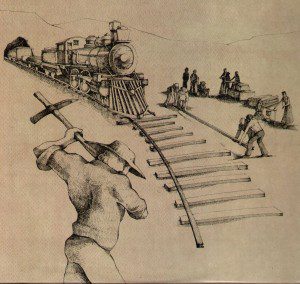 It doesn’t get much more traditional than having someone read 1 Corinthians 13 at a wedding.

I didn’t even mind that much when Madge stumbled in and segued into the not-quite-a-fit-musically “Open Your Heart.” I like Madonna, but if we’re going to bring her out onto a stage with a gospel-choir of back-up singers, then she needs to be singing one of her songs that calls for that — and “Open Your Heart” isn’t one of them.

I was still able to enjoy the moment, but that was a wrong turn musically — particularly since the right turn was right there in plain sight.

I’m not sure exactly what song the beginning of “Same Love” is built on. At first I thought it was “People Get Ready,” but it may be less direct than that. My new guess is that it’s built on John Mayer’s “Waiting on the World to Change“:

Which, I think, was probably suggested by Jimmy & Stevie Ray Vaughn’s “Tick Tock“:

Which, in turn, owes its existence to Curtis Mayfield’s “People Get Ready“:

It’s no coincidence that those songs aren’t just musically related, but that their lyrics also all offer variations on the same theme — something like a vision of the blessed community from the book of Isaiah. Like this:

The sick, the hungry, had smiles on their faces
The tired and the homeless had family all around
The streets and the cities were all beautiful places
And the walls came tumblin’ down

And they all also have the advantage of being songs that could have taken full advantage of that gospel choir. That’s what left me a bit disappointed — I wanted to hear that choir cut loose as “Same Love” segued into “People Get Ready.”

Where “Open your heart” came across as a bit too much like a command, “Just get on board” would’ve sounded like an invitation that might have been hard to resist.

Still, though, it was a lovely moment, and buffoons like Starnes who try to pretend something so joyous and celebratory is the picture of evil and “hate” just look like fools who missed the train because they were clinging to their baggage.

Love is patient, love is kind. You don’t need no baggage, you just get on board.

January 27, 2014 International House of Pride: Beware of God's special apostles who bring the 'prophetic word' from God that they are apostles and that they are special
Recent Comments
0 | Leave a Comment
"Conservatives: "We are against abortion!" Everyone with a brain: "There are policies that would actually ..."
Rakka Jan. 24 Flashback: A toxin that ..."
"Over here in Brexit land, it's anti-trans sentiment that has been seized upon by the ..."
Scurra Jan. 24 Flashback: A toxin that ..."
"Difference being that historical fic is set in our own world's history, which we already ..."
lowtechcyclist Jan. 23 Flashback: White evangelicalism is ..."
"The first and third films in the newer trilogy could have been generated by an ..."
Carstonio Jan. 23 Flashback: White evangelicalism is ..."
Browse Our Archives
get the latest updates from
slacktivist
and the Patheos
Progressive Christian
Channel
POPULAR AT PATHEOS Progressive Christian
1

Jan. 23 Flashback: White evangelicalism is a backlash...
A post from the very last January before Supreme Court justices championed...
view all Progressive Christian blogs
What Are Your Thoughts?leave a comment
Copyright 2008-2021, Patheos. All rights reserved.