Teaching young-Earth creationism is a sin

A much-publicized “debate” between science advocate Bill Nye (“The Science Guy”) and young-Earth creationist Ken Ham is set for this evening.

That’s only half the debate that needs to happen. Yes, Ham’s “scientific creationism” is a wretched counterfeit of real science, so it’s good that he’s being challenged on the facts of science by someone well-versed in those facts. But Ham’s nonsense is even more a wretched counterfeit of Christian theology, and he also needs to be challenged on the facts of theology by someone well-versed in the Bible and in orthodox Christian teaching.

The man is doubly a fraud and both halves of his fraudulence need to be rebutted. They are equally true and equally in need of public refutation.

Anyway, in light of the big “debate” this evening, here are some related links:

• Via James McGrath, here is N.T. Wright discussing what a “literal” reading of Genesis 1 actually has to teach us:

• Beth Spencer responds to a “bizarre” column by Rod Dreher in which the self-proclaimed crunchy con threatens scientists to back off refutations of young-Earth creationist nonsense lest people like him start claiming “science” to support racist theories. 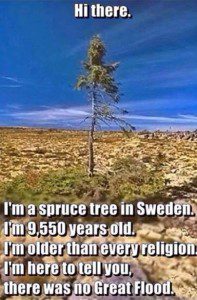 • Tim Donaghy is bewitched, bothered and bewildered by an encounter with a young-Earth creationist advocating the Omphalos hypothesis — also known as Last-Thursday-ism.

• The Vatican Observatory offers a fascinating and not-as-defensive-as-you-might-expect account of “The Galileo Affair.”

• James McGrath is very pleased to hear Ken Ham worrying about the “danger” of progressive Christians. McGrath has been on a roll leading up to this debate (which he’ll be live-blogging tonight). Here’s a bunch of his recent posts on the follies of young-Earth creationism.

• And finally, here’s Joel Duff discussing a cool fossil found in the Calvert Cliffs of the Chesapeake. As always, Duff provides an interesting discussion of the fossil itself and then segues into why it and the cliffs in which it was found conclusively disprove the young-Earth claims of people like Ken Ham. Duff is devastatingly good at that. Scroll back through the posts on his blog and you’ll find plenty more where that came from.

February 5, 2014 6 @ 8: Principalities and powers
Recent Comments
0 | Leave a Comment
"Yes, but all tradition is now measured against the 1950s because apparently the Boomers all ..."
KhazadDoom May 19 Flashback: UAPs
"Sloughing skin. AKA peeling after sunburn.Us pale people also do that above 90 degrees Fahrenheit."
KhazadDoom May 19 Flashback: UAPs
"No surprise to Fred in how far those folks will go, I suspect…https://www.salon.com/2022/..."
Carstonio Smart people saying smart things (5.19.22)
"Reading my reply to the original post, I realized that I think of deities, whether ..."
Carstonio May 19 Flashback: UAPs
Browse Our Archives
Related posts from slacktivist