The Nye-Ham Debate: A Reader

There have been a host of excellent responses and reactions to that debate, and I meant to write about many of them, but instead I irresponsibly spent most of last week shivering in the dark, listening to local AM news radio and to the awful hold music on PECO’s hotline, or driving around guerrilla-charging cell phones at supermarkets and post offices, or experimenting with the various permutations of prayers and profanity that would result in the very expensive generator we bought finally starting next time I pull that chain.

And but so, instead of engaging all of these, I’ll just list them here. This isn’t everything that was written about this debate, but it’s some of the better stuff I read (feel free to supplement this list with additional links in comments).

Here is the video of the debate itself (all three hours of it):

If you’d like to make that three hours a bit more entertaining, try the “Ken Ham Bingo” cards created by Josh Rosenau of the National Center for Science Education. Or you could try Doktor Zoom’s Nye-Ham Debate Drinking Game, although that would likely result in inebriation, injury and/or arrest well before you’d gotten through the full debate.

And if you can ‘t imagine ever drinking enough to get through the full thing, Kimberly Winston of Religion News Service provides highlights and excerpts.

Anyway, here’s some of my favorite commentary on the event. This isn’t all of it, mind you, but I’m saving some of the other responses for a subsequent post on Why Young-Earth Creationism Needs to Be Killed With Fire.

I have to be honest, if I’d known I’d be in for an endless lecture of dumb, I might have spent the night doing something else, like jabbing myself in the eye with a fork.

America’s young-Earth creationists know where the real debate lies. It’s an intramural debate within conservative Christianity about whether evolution is compatible with belief in God as Creator. Their literature focuses almost exclusively on this, rather than the scientific evidence. And this is indeed a live question and one I have been engaging for some time in what looks increasingly like a quixotic enterprise. Polls show repeatedly that most Americans embrace some form of Christianity and that roughly half of them have rejected evolution as a consequence. Ken Ham’s argument is that Christians cannot accept evolution because it is incompatible with their faith.

• Sarah Posner, “When the Science Guy Misses the Politics”

Nye said before the debate that he wanted to draw attention to the need for science education in the United States. If he was able to accomplish that, kudos to him. But one can only hope that the debate drew attention to something else: that in debating creationism versus evolution, scientific facts are not the only evidence one needs to bring to the party. 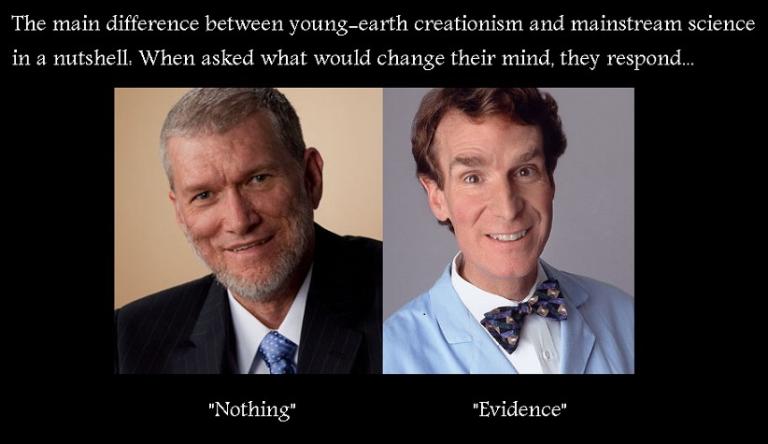 The answer is quite clear. The creation model preached by Ken Ham and Answers in Genesis is not a viable model of origins in today’s modern scientific era.  Frankly the science is not at issue. The stretches required to fit even observational science into a young earth view strain credulity.

• Phil Plait, “The Creation of Debate”

The conflict over the teaching of evolution is based on the false assumption that evolution is antagonistic to religion. This is why, I think, evolution is so vehemently opposed by so many in the United States. The attacks on the specifics of evolution — the claims about irreducibility of the eye, for example, or other such incorrect statements — are a symptom, not a cause. I can talk about how we know the Universe is old until the Universe is substantially older and not convince someone whose heels are dug in. But if we can show them that the idea of evolution is not contrary to their faith, then we will make far, far more progress.

• Doktor Zoom, “Bill Nye, Expert at Explaining Science to Children, Finds It Too Complicated for a Creationist”

Bill Nye also spent too much time wondering how anyone in their right mind could accept the world as Ken Ham portrays it. That doesn’t matter. They do. Thousands and thousands of them do. He needed to get past that and was, seemingly, unable to.

When Nye noted that a tree in Sweden is older than Ken Ham’s Earth, Ham scoffed: “We didn’t see those tree rings actually forming. We didn’t see those layers being laid down. You’re assuming things in regard to the past that aren’t necessarily true.” When Nye pointed out that radiometric dating places the Earth’s age at about 4.5 billion years, Ham sneered: “There’s only one infallible dating method. The witness who was there and told everything and told us. From the word of God.” And when Nye explained that astronomy provides a glimpse into the past and the astonishing age of the universe, Ham held that “there is nothing in observational astronomy that contradicts a young universe. The reason I believe in a young universe is because of the Bible’s account of origins.”

• Heath Bradley, “Where I Agree With Ken Ham”

Just by being himself, letting his love of science shine through, Nye demonstrated how joy, wonder, excitement, passion, and purpose — all things religious people tend to associate with service to God — can be a part of an atheist’s life. (To be fair, I don’t know for sure what Nye’s beliefs are, but Creationist fundamentalism does rather tend to lump together evolution belief and atheism, along with homosexuality, Communism, and baby-eating.)

Despite what people like Ken Ham are telling you, if you are a religious person, you do not need to choose between believing in evolution OR believing your faith. That makes Ham twice the liar: Once for denying our knowledge of reality and the natural world, and twice for telling you that natural wonder can’t complement, enrich, or, for some people, perhaps even become your spirituality.

In my relatively short life as a Christian, I’ve changed my mind about lots of things, repeatedly — including what exactly we mean when we say the Bible is true. Lots of Christians have done this, of course (and not just liberal ones). The Century publishes a whole series of articles about how and why. It’s part of the joy — and the responsibility — of a living personal faith.

Most scientists think Ham’s approach is no way to do science. I’ve got little to add to that; I’m not a scientist. But I am a Christian, and I find it downright depressing to imagine a life of faith so utterly resistant to change.

• Hemant Mehta, “Was the Creationism Debate Worth It?”

• Paul Fidalgo, “The Nye-Ham Debate Was a Net Win for Science”

In the end, the most important thing about this debate, which drew dramatic attention, is that it was thoroughly disruptive of the evolution-creationism status quo. We’ve been in a rut in this battle for too long, with school boards and lawmakers continuing their stealth anti-evolution attacks (rarely admitting, as Ham so plainly did, that they’re driven by religion) even as scientists wring their hands about American anti-intellectualism from the safety of their college towns.

Last night, in contrast, it all hung out. We saw what Young Earth creationists really, really think. They believe in vegetarian lions and an Earth younger than its oldest-living tree. And for most Americans, there’s just no way that makes any sense.

February 10, 2014
Carry me home in my dreams, nothing's the way it seems
Next Post