Will this thing go to the moon?

• Religion News Service reports on the IF:Gathering — a hugely successful recent Christian women’s conference that underscores the way those excluded from a seat at the table are creating their own tables thankyouverymuch:

“Blogs are creating a platform for women who might not have otherwise been heard,” said Cindy Bunch, an editor at InterVarsity Press responsible for a new imprint by women, called Crescendo. “Denominations have always had women’s ministries. I think what’s new perhaps is women having a stronger writing platform and being read widely by men and women.” 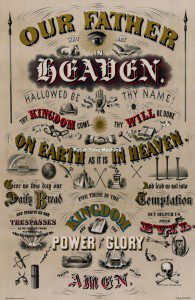 • “This is epistemological synecdoche. To know a part is to know the whole.”

• This headline, remarkably, does not come from either Texas or Florida: “Man shouts about Jesus while smashing police car in front of Darth Vader.” The otherwise very accurate headline there neglects to mention that Superman was also an onlooker.

• “Bob remembered one of the most basic lessons in dealing with customer service: appeal to a greater authority.”

Sensing new opportunities for attention and influence, a new breed of evangelical leader — what Worthen calls the “evangelical guru” — stepped forward to market popular new Bible certainties and to depict themselves as heroic last-ditch defenders of the faith. Francis Schaeffer, who spent much of his life maintaining a Swiss counterculturalist evangelical enclave called L’Abri, barnstormed the United States in the 1970s on a tour that repackaged evangelical piety as nothing less than the last firewall holding back an apocalyptic secular humanist assault on the very idea of Western civilization. Around the same time, a former Campus Crusade for Christ operative named Hal Lindsey published The Late Great Planet Earth, a tortured literalist effort to read the drama of the final pages of Revelation into the recessionary, ennui-laden headlines of the 1970s. Lindsey’s heavy-breathing prophecy tract has clocked more than 28 million in sales to date, and by the end of the ’70s The New York Times proclaimed it the bestselling book of the decade.

In intellectual terms, Schaeffer and Lindsey were hacks at best, charlatans at worst — but as Worthen notes, both men took great pains to stud their end-times preachments with learned references to classical history, modern philosophy and, of course, the inerrant word of God as preserved in Scripture. The net effect “made the reader feel smart, in the know, and personally involved in history’s climax.” Both authors had imbibed enough of the neo-evangelical gospel to preserve at least the facade of the engaged public intellectual. More successfully than any of their predecessors in the neo-evangelical world of theology and letters, Schaeffer and Lindsey institutionalized their own heightened sense of cultural and intellectual anxiety; but instead of pursuing the finer points of biblical doctrine or denominational orthodoxy, they made use of the far more capacious canvas of end-of-the-world alarmism to render their message in the broadest, brightest strokes of fulfilled prophecy.