On my way to the promised land

A little while ago, Christian Nightmares tracked down a vinyl record of one of Sketch Erickson’s old lectures, Sketch Sounds Off on Trends in Today’s Pop Culture.

There was this guy who came to my church a few times when I was a kid, his name was Sketch Erickson. He would tour the church circuit and preach about the evils of rock ‘n’ roll. … He would talk about how kids who listened to rock music were getting possessed by Satan, how there were all these subliminal messages in the songs, and that if you played some records backwards you could actually hear these messages for yourself. So of course I wanted to try it! Me and a friend of mine spent hours manually spinning records backwards.

What good fundie kid didn’t spend hours manually spinning records backwards? Guys like Sketch Erickson pretty much guaranteed that would become a hobby for most of us. We looked for secret messages in everything from Led Zeppelin IV to the not-so-secret messages intentionally recorded on Petra LPs (play “Judas Kiss” backwards and it says “Why are you looking for the devil, when you ought to be looking for the Lord?” — but then if you already knew the band Petra existed, then you probably already knew that).

We had plenty of these guys who came around as guest speakers in my church youth group or at my private Christian school. They’d condemn the evils and dangers of rock and roll — many of them even warning against the gateway drug of Christian-brand bands like Petra.

But even by the loony, loopy standards of the anti-rock-preacher circuit, Sketch Erickson stood out. He was obsessed with Elvis — tracing all the evils in pop music, pop culture, and the entire world back to “Elvis. Aron. Presley.” He always said the name like that — first, middle, last, emphasizing each one. That serpent in the Garden of Eden with its sinuous hips? Elvis. Aron. Presley.

Sketch didn’t just worry about secret backwards messages, or about the kind of heavy metal bands who were, in the late 1970s and early 1980s, making a living trying to shock all the old folks like him. Pretty much anything with a drum was, in his view, decadent and corrupting. It was all “race music” — yeah, he said that, in the 1980s he was still using that phrase — and it had come to corrupt the entire culture due to … Elvis. Aron. Presley.

In a weird way, I suppose, Sketch Erickson was the first person to help me understand the cultural appropriation critique of Elvis. He was against it, but not for the reasons that most of the people who use that term would be.

Am I suggesting that Sketch Erickson was a racist. No — I’m stating that he was. His stock lecture included several variations of the urban legend/Christian lie about the missionary kid playing American pop music and the once-benighted natives recoiling on hearing what they identified as demonic jungle drums. Here’s the Jack Chick version of that bit, from Chick’s Crusaders comic “Spellbound“: 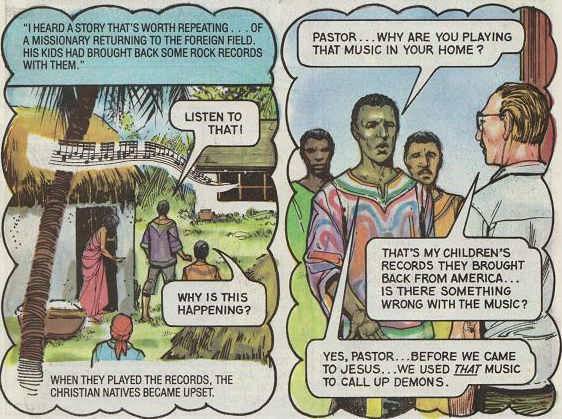 Anything Sketch disapproved of he would somehow trace back to Satan and Elvis, Elvis and Satan. I remember he had one long rant against the Starland Vocal Band’s 1976 song “Afternoon Delight.” (Warning: that link goes to a YouTube page where, if you click the wrong button, you will hear the Starland Vocal Band’s 1976 song “Afternoon Delight.” Be careful.) That song may be the opposite of sexy in every way, but it’s also pretty clearly about sex, which ought to be more than enough for a moralizer like Sketch Erickson. But he wasn’t satisfied with just criticizing the lyrical content. He managed, somehow, to keep talking until he had somehow linked even that song back to race music, Satan, and, yes … Elvis. Aron. Presley.

During one of Sketch Erickson’s visits to our school I got a demerit — for singing part of a hymn, believe it or not. He was going on about the decadence of pop music and its banal repetition. No decent artist, he said, would just repeat the lines of a song. “Holy, holy, holy,” I said. Demerit.

Most of the other anti-rock preachers weren’t as bad as Sketch. But they all seemed to share his general obliviousness.

One guy — I forget his name — spent his whole talk just racing through every band anybody had ever heard of to clarify for us that all of them were, in some way, Satan-worshippers. He played a snippet of “Walk This Way” as he put up a slide of an Aerosmith album cover. I’m pretty sure that if that guy had understood one word of the song that was playing he would have been horrified, but he wasn’t paying attention to the song. He was pointing out that Aerosmith’s logo incorporated wings and explaining how wings are a “well-known” symbol used by devil-worshippers. “They have an album called Get Your Wings,” he said portentously. “Yet none of the songs mention wings.”

Another guy spent nearly half an hour exegeting the Eagles’ “Hotel California.” By the end of his talk, I had learned a great deal about the intricacies of Satan worship (none of it true), and I think I had also learned every word of that song.

What brings all this up is that Bruce Springsteen played Perth, Australia, on Saturday night. In honor of his hosts, he kicked off the show with a traditional Australian folk song:

Not bad for a bunch of guys in their 60s.

I think every single one of those anti-rock preachers I heard in my fundie youth singled out AC/DC’s “Highway to Hell” as a particularly horrifying example of all that was wrong with modern music, modern culture, and this entire fallen world that we should pray Jesus will soon Rapture us out of.

But I don’t think a single one of those speakers also recognized this: That song is just plain fun.

I’m no longer a teenager in a fundamentalist youth group, so I’m no longer required to keep track of what’s being said by the various traveling salesmen on the anti-rock preacher circuit. From what I can tell, though, their shtick hasn’t changed much.

How do I know? Because, among other reasons, young CCM star Katy Hudson grew up in that same white fundie subculture. And I can see from her performance at the 2014 Grammy Awards (she’s better known as Katy Perry these days) that the anti-rock preachers are still making a living obsessing over all the same weird obsessions. She heard all those lectures and learned what all their outrage buttons are. And she went out and pushed them. Cheeky. (My problem with her song “Dark Horse,” though, is that it makes me think of this.)

February 12, 2014
Why young-Earth creationism needs to be killed with fire (part 2)
Next Post

February 13, 2014 Will this thing go to the moon?
Recent Comments
0 | Leave a Comment
Browse Our Archives
get the latest from
slacktivist
Sign up for our newsletter
POPULAR AT PATHEOS Progressive Christian
1

The Covid-19 Test: Do we really believe church...
With the Covid-19 lockdown of a year ago, we (the staff...
view all Progressive Christian blogs
What Are Your Thoughts?leave a comment
Copyright 2008-2021, Patheos. All rights reserved.
error: Content is protected !!