One Voice for Change is an expression of love. More specifically, it is “a movement seeking gender equality in Churches of Christ.” That last bit there is a proper noun, the name of the conservative, evangelical Protestant affiliation that’s probably best known for eschewing musical accompaniment. (Hence the prevailing opinion of the Churches of Christ among other evangelical traditions: They have some odd ideas, but they sure do sing pretty.)

I learned about One Voice for Change from two of my favorite bloggers, Richard Beck and James W. McCarthy — both of whom are part of the Churches of Christ tradition and are proponents of full gender equality in the church and supporters of 1V4C. One Voice for Change is a Good Thing and I wish them every success.

Gender equality is not the current reality in Churches of Christ, and getting there from here will involve overcoming some formidable obstacles. One hurdle is the tradition’s church polity — or its lack thereof. We tend to refer to all Protestant sects as “denominations,” but like most Baptist associations, the Churches of Christ is not actually a denomination. It has no hierarchy, no magisterium, no bishops or structures of that kind. Bringing about widespread change within the anarchical, congregationalist polity of such a [non]denomination can thus be like herding cats.

The bigger obstacle facing One Voice for Change, though, is the Great Wall of Clobber Texts that has long withstood many such efforts to promote gender equality in American churches.

The biblical case for full gender equality in the church is clear, potent and overwhelming. It flows with the trajectory of all the major currents of the mighty stream of scripture. It is an inescapable consequence, means and mechanism of the overriding, over-arching biblical mandate of love and justice and love, love, love.

And yet there are some verses, a bunch of them, that can be plucked out of that great stream and divorced from the context of that biblical current. And if you set those verses off to the side and allow them to dry off so as to no longer be tainted by all the other verses and arguments and principles to which they were formerly attached, they can be read in such a way that they seem to forbid gender equality in the church.

This process of selecting verses to extract from the rest, elevating them above the rest, and thereby interpreting them to contradict the rest, is what I call the clobber-text hermeneutic. This approach to the Bible is pandemic in America, where it was perfected and popularized because it provided the only excuse that white Christians could come up with for reconciling their defense of slavery with the gospel of Jesus Christ.

Gender inequality in the church is not the only disastrously un-biblical consequence of the disastrous clobber-text hermeneutic. It is an evil tree that bears a great deal of evil fruit. The same selectively distorting approach to the Bible has also given us both young-Earth creationism and the exclusion/condemnation of LGBT people by the church.

We could express all of that in a diagram, something like this: 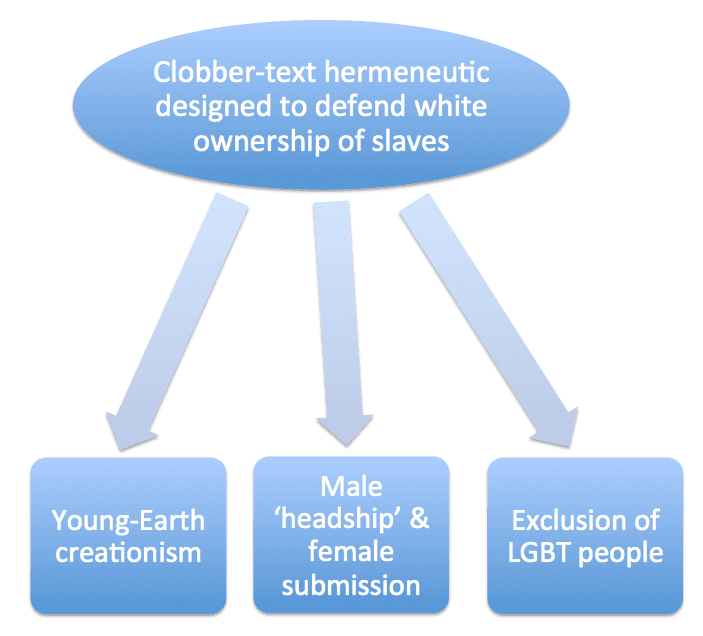 That illustrates how this clobber-text hermeneutic creates and feeds these other problems, but it’s not entirely accurate because the arrows in that diagram only point in one direction. The reality is that all of those things spawned by this perverse hermeneutic are derived from it, but they also feed back into it, reinforcing it and strengthening it.

This reinforcement is particularly strong, I think, when it comes to young-Earth creationism. That’s what we heard again and again from Ken Ham in last week’s debate, and from Ham’s pseudo-academic allies, like Southern Baptist Bishop Al Mohler. For them, young-Earth creationism isn’t just a consequence of a clobber-text hermeneutic, but a vital tool for defending that hermeneutic and declaring every other approach to the Bible to be illegitimate, anti-God and even “nihilistic.”

So let’s amend our diagram to reflect that: 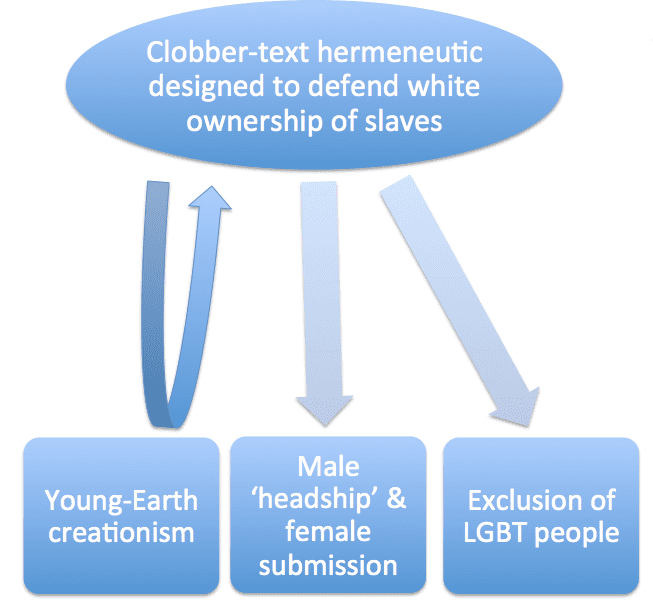 We can’t treat it as an inconsequential sideshow — a distraction to our higher calling to love each other and to love our communities. It won’t allow us to do that. It stands against our doing that in any but the most sentimental and anemic way.

February 12, 2014
I find it rough going in expressing myself
Next Post