No. Stop doing this.

• Here is Kiera Feldman writing for The New Republic: “This, however, was Patrick Henry College (PHC), the elite evangelical school better known as ‘God’s Harvard.'”

• Hemant Mehta is a bit more circumspect, but he still gets the Patrick Henry marketing department’s slogan out there: “At Patrick Henry College, a private Christian school that sends a disproportionate number of graduates into political fields and has been dubbed ‘God’s Harvard,’ it appears that reports of sexual abuse have not been taken seriously even after female students step forward with their stories.” 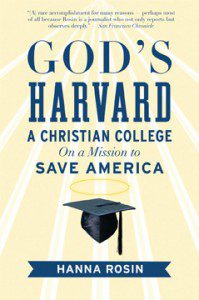 This insular, backward institution of lower education is not “better known” as anything. It is not “commonly referred to” at all.

On the rare occasion that it is known or referred to outside of its own constricted, incestuous circle, it’s usually dismissed as “Homeschool U.” or just “that crazy right-wing place …  no, not Bob Jones … no, not Hillsdale … the other one.” To the extent that anyone knows of the place, it’s not known as “God’s Harvard” but as a refuge for people who think Liberty has gotten too liberal since Jerry Falwell died.

Wheaton College is sometimes referred to as a “Christian Harvard,” or the “Evangelical Harvard” — a reflection of the school’s aspiration to maintain academic excellence (no matter how many embarrassing things its current president says about contraception or creationism).

But that nickname hasn’t ever been earned by or applied to Patrick Henry College. It’s not something anyone else says about PHC, only something the school asserts about itself. And unlike at Wheaton, where the word “Harvard” implies academic striving, the folks at PHC seem to like the comparison mainly because they’re crazy jealous of the Ivy League school’s elite respect and cultural influence.

God’s Harvard is the name Hannah Rosin’s 2007 book about PHC. But Rosin called her book that because it’s something she heard endlessly repeated by the school’s founders, leaders and promoters. “Harvard for Homeschoolers” was one of founder Michael Farris’ booster slogans. Rosin adopted and adapted that for her title. She did so ironically. (Both words of that title are ironic. Rosin wasn’t telling us that this institution is the academic equivalent of Harvard, or that it is clearly aligned with the divine. The title tells us what the school thinks of itself. These are people who imagine that they have nothing to learn from anyone at Harvard and people who imagine that they represent God.)

None of this is anywhere near as important as the substance of Feldman’s New Republic reporting, which finds that Patrick Henry College — like nearly every other patriarchal fundamentalist institution — seems to have a serious problem with sexual predation and with protecting sexual predators. So go read that whole piece (trigger warning), because while Patrick Henry College’s claim to be “God’s Harvard” may be ludicrous, it can make a credible claim to be the “Harvard” of rape culture.

February 18, 2014
No, snake-handling is neither 'literal' nor 'biblical'
Next Post

Why Being is Enough
I'm working on my next tattoo.  A lot of people can't believe...
view all Progressive Christian blogs
What Are Your Thoughts?leave a comment
Copyright 2008-2021, Patheos. All rights reserved.