No, snake-handling is neither ‘literal’ nor ‘biblical’

Morgan Guyton offers a tongue-in-cheek challenge to white evangelicals who claim to follow a strictly literal interpretation of the Bible, “The Awkward Truth About Snake-Handling: It’s Totally Biblical.” 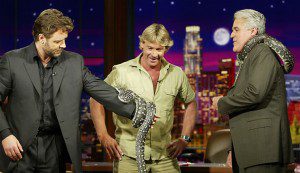 It’s a fair bit of snark. After all, snake-handlers are simply people who have embraced a clobber-text and they’re milking it for all its worth in the same exact quasi-literate, contextless way that every clobber-texter treats every clobber-text. So it’s fun to see Guyton tweak the self-proclaimed “literalists” and “inerrantists” by pointing out that snake-handlers are simply utilizing the same crooked exegesis and deliriously self-serving hermeneutic as most white evangelicals in America have used ever since they had to come up with a way to appeal to the Bible to make slave-owning sound like something Jesus would do.

But that doesn’t make it “totally biblical.” Totally “biblical,” maybe, with ironic scare-quotes to indicate the counterfeit use of the term.

The awkward truth is that literalists and inerrantists and all the clobber-texting heirs of Confederate hermeneutics wouldn’t know “biblical” if reared back and bit ’em.

Sarah Pulliam Bailey points us back to a gripping 2012 essay by photojournalist Lauren Pond, “Why I watched a snake-handling pastor die for his faith“:

This is what I saw through my camera lens: Pastor Randy “Mack” Wolford, tossing and turning on the couch in his mother-in-law’s West Virginia trailer, suffering from the pain of a rattlesnake bite he had received earlier in the day. Parishioners surrounding him in prayer in the stifling heat. His mother stroking his feet, her expression a mixture of concern, sorrow and, eventually, acceptance: This is how her eldest son — a legend in the local Pentecostal serpent-handling community — would die.

… Mack’s family has accepted his death as something that he knew was coming and something that was ultimately God’s will. The pastor believed every word of the Bible and laid down his life for his conviction, they said.

That’s not true. What Mack’s family said about their departed son and father and brother just plain was not true. He did not “believe every word of the Bible.” No one does. (And, frankly, no one should — no one is supposed to.)

Mack, as a snake-handling Pentecostal in the century-old Appalachian Signs Following tradition, believed a select set of words in the Bible. But he also disregarded and disbelieved many hundreds of thousands more.

In an old (1998) Christian History piece on the origins of this snake-handling tradition, Ted Olsen wrote admiringly of these believers devotion to their “literal” faith in the “literal” Bible:

Today about 2,500 Pentecostals practice snake handling. The churches are autonomous … and they are marked by strict literal interpretations of the Bible. Jewelry is forbidden, including wedding rings and watches. Women may not cut their hair. Members greet each other “with a holy kiss.”

That last commandment is often cited as a prime example of how alleged literalists pick and choose what it is they’re going to be literal about. “Greet one another with a holy kiss,” we are told in the New Testament — five different times. And yet we don’t do this because … well partly because we’re not even sure what it means. And because we’ve decided it’s a culturally bound custom — some kind of first-century Mediterranean thing.

But somehow this little fringe sect “marked by strict literal interpretations of the Bible” doesn’t cancel all debt every six years. They are neither pacifists nor genocidal conquerors (both of which — unfortunately for those who would be literal inerrantists — are commanded in various places in the Bible). They do not practice Jubilee, or Sotah, or requiring the one with two tunics to give to the one who has none.

This sect takes a literalistic approach to the small regiment of Bible passages it acknowledges, yet like all who claim such a “strict literal interpretation,” they leave a vastly larger amount of the Bible unacknowledged and seemingly unnoticed.

Fun exercise: The speeches and writing of Martin Luther King Jr. are saturated with scripture. You can never get very far in King without tripping across several scripture quotes, references and allusions. Take one of his speeches — any one — and make a list of all the biblical passages he quotes or cites or alludes to. Then ask yourself if you’ve ever heard any of the proponents of a “strict literal interpretation” advocate following any of those verses literally. Ask yourself if you’ve ever heard any of those folks even acknowledging that any of those verses exists.

The people most likely to insist on being “totally biblical” are the least likely to have noticed the total Bible. Some of them have dispensed with it through dispensationalism or some other semi-Marcionite scheme, but most simply haven’t noticed huge vast chunks of the Bible exist. They’ve read through Amos, but yet they’ve never read Amos — never really seen it.

All of which is to say that Morgan Guyton is right: snake-handling is totally “biblical” in the sense that it arises from the same selective literalism that governs every variation of the clobber-text hermeneutic. Which is to say, in other words, that it is not really biblical at all.