In The Guardian, Dean Burnett writes, “Time travelers: Please don’t kill Hitler.” The dek of Burnett’s article summarizes where he’s going with this: “In almost any science-fiction scenario involving time-travel, the default action is to kill Hitler. As terrible a human being as he was, there are many reasons why this probably isn’t a good idea.”

I agree, but not for any of the reasons Burnett suggests. If I were a time traveler, I wouldn’t kill Hitler. I would kidnap him instead.

Specifically, I would kidnap Adolf Hitler on August 3, 1936, just as the starter’s pistol is fired for the 100-meter finals at the Olympic Stadium in Berlin. I would return him on August 3, 1936, to the very same spot, while the sound of that pistol was still echoing throughout the stadium, 10.3 seconds before Jesse Owens crossed the finish line. And no one other than him would know that he had ever been gone, or that he had been somewhere else and somewhen else for years or possibly even decades.

Where and when he will have had been, of course, will have been here and now — I’m not sure what sort of verb tense to use there. The point is that we whisk him away from Berlin in 1936 and take him to a holding cell here in the present. There he will be subjected to a history lesson. We will try to show him everything that followed/will follow/could follow in the remaining nine years of his damnable life. Everything.

We would show him the road that lies ahead until he is convinced to take a different road. We will show him books, movies, documentaries, artwork. All of them. 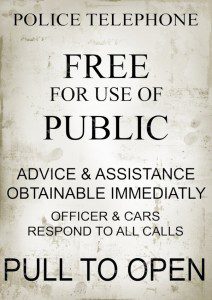 I am not naively optimistic that this would work quickly or easily. This was not a man who was wavering in his convictions, not someone who was teetering like a coin on its edge, but someone whose will would need to be overwhelmed and broken. That would take time. Perhaps a great deal of time. That’s OK because, again, in this scenario, I have a machine that makes time.

If reading the books — and hearing them read, continuously, all day, every day — did not seem to make any impression, then we would arrange to have him speak with the authors. I am a madman with a box, I can make that happen. I can arrange an endless Bill-and-Ted style presentation in which our abductee is forced to meet — and to listen to — a steady stream of those he needs to hear. Oh, to be a fly on the wall in that holding cell during the many long hours in which Simon Wiesenthal was in there speaking. (Or, for that matter, to sit and eavesdrop in the little waiting room nearby where Hannah Arendt, Dietrich Bonhoeffer and Elie Wiesel chat while awaiting their turns.)

Again, please don’t misunderstand me here. I’m not in any way suggesting that Adolf Hitler was simply misinformed and that a bit of education or re-education could correct the error of his ways. My confidence in this plan isn’t dependent on the likelihood of his being even slightly susceptible to this process. My confidence is based, rather, on the fact that we have patience and a time machine, and we can keep at it until it works.* What we’re attempting may be nearly impossible, but if we think of this problem as whether or not we can pull off something nearly impossible before it is too late, then it improves our odds greatly to realize that “too late” ceases to be a problem if you’ve got a time machine.

Admittedly, my don’t-kill-kidnap plan doesn’t address Burnett’s main objection to the time-traveling Hitler-assassination scheme. His main point seems to be a variation of the usual time-travel story caution that mucking about with the past involves too many variables and to many unforeseen consequences:

There’s the oft-quoted example of the butterfly effect, i.e. very small changes in a very complex system can have very big effects. You can criticise Hitler for many valid reasons, but one thing he wasn’t was “insignificant”; if he were, there’d be no desire to assassinate him. So even if you did succeed, given the impact he had on so many lives, you’d drastically alter the future/present.

The butterfly effect recalls Ray Bradbury’s wonderful formulation of this same warning in his short story “A Sound of Thunder.” Change the past and you change the present in ways you could never begin to calculate. And, as Burnett says, those changes might well mean that the future time traveler never winds up being born.

That’s certainly worth considering, so let’s consider it — let’s dig down to the ugly little core of that idea. The notion is that it would be unwise to go back in time to prevent a great evil because without that evil the world would be very different and such a very different world might not include the series of events that led to your own birth and existence. Boil that down and it becomes this: Your very existence may depend on the reality of some great evil. Boil it down still further and it presents itself as a choice: Your own existence or preventing the evil thing. Or, to put it a bit more starkly, it’s your one life vs. the lives of millions of others.

The caution Burnett advises isn’t solely self-interested, though. He also reminds us that in the unchanged past,** Hitler lost:

This is overlooked surprisingly often, so it bears repeating: Hitler didn’t win. Whatever you think of the present, we don’t live in some bleak wasteland dominated by a global Reich. Because Hitler and his armies lost. Although it was a costly victory, it was still technically a victory, so why risk going back and interfering with an outcome you favor?

This is prudent advice. As horrific as the past may be, it could still have been even worse. And there’s no guarantee that any effort to go back and change things wouldn’t wind up making those things even worse.

But ultimately I cannot accept this seemingly prudent caution against trying to change the past because if that were the final word, then I would also have to accept the same thing about the present and the future. Because this is not an entirely hypothetical exercise. I may not have a time machine — I may not be a madman with that kind of box*** — but we are, in fact, all of us, time travelers, whether we like it or not. Every day all of us travel forward in time, 24 hours into the future.

And here, in the present and moving into the future, I do not think it prudent or wisely cautious or in any way commendable for us to refuse to try to change anything. I think we’re actually obliged to risk and to interfere and to meddle with the present and the future. And if that’s true for today and for tomorrow, then why shouldn’t it also be true for yesterday?

But whenever we choose to act — today or yesterday — we must do so responsibly, do so in a way that makes it likelier we’re improving things and less likely that we’ll wind up making them worse. Burnett is right that we could never account for or even imagine all the variables involved in going back to change the past. The same is true for everything we do in the present. That doesn’t mean we must never act, it means we must learn to act carefully.

That’s why I wouldn’t want to travel back in time to kill Hitler. Too much killing is already the problem with that part of the past, so going back to add more killing seems the wrong way to go about trying to change that.

Burnett invokes chaos theory and the butterfly effect, but those aren’t the only way to think about how “very small changes in a very complex system can have very big effects.” Robert Kennedy suggested another way to think about that:

Few will have the greatness to bend history itself, but each of us can work to change a small portion of events. It is from numberless diverse acts of courage and belief that human history is shaped. Each time a man stands up for an ideal, or acts to improve the lot of others, or strikes out against injustice, he sends forth a tiny ripple of hope, and crossing each other from a million different centers of energy and daring those ripples build a current which can sweep down the mightiest walls of oppression and resistance.

We cannot stop traveling through time. And we cannot travel through time without altering the timestream and changing the story in myriad, incalculable ways. Right now, at this very moment, we’re changing the future. The only question is what kind of change we’re going to make.

* And if it never works? Well, then we still don’t kill anyone. We just turn to Plan B, which involves sending someone else back to August 3, 1936, to pose as Hitler long enough to successfully dismantle and derail his government and war machine. (I’m thinking Cate Blanchett, maybe. She’s the right height and she can play anybody.)

** Or the iteration of the past that appears to us to be unchanged. As far as I know, the idea of time travel that could alter the past is purely hypothetical and imaginary — but if such a thing could be done, or if it had been done, or could have had was will being done, then how would we know? Wouldn’t any change in the past thereby change the present in such a way that the past would always appear unchanged?

*** I have got a box, though. I’m typing this on a box right now. And there you are, in the future, reading this on another box. And these boxes of ours — they’re bigger on the inside.