Misstatements of faith: How lying is mandatory for white evangelical institutions (part 1)

This is, as Enns says, a tiresome story. The Dayton, Tenn., school is an accredited undergraduate program. For $28,750, you can enroll there as a student and you can study science. But if you study science at Bryan College, you will be learning from professors who are now required to sign the following “clarification” of the school’s Statement of Faith:

We believe that all humanity is descended from Adam and Eve. They are historical persons created by God in a special formative act, and not from previously existing life forms.

Even worse, you will be learning from professors who have been warned that they are being watched, carefully, and that someone is always looking over their shoulder to ensure that they never say or teach or acknowledge anything that might cast doubt on that statement.

There’s a word for charging students $28,750 for that. It’s called stealing. “The Lord detests differing weights, and dishonest scales do not please him” (Prov. 20:23).

A school can govern itself any way it wishes and can believe what it wants to believe. It can govern itself intellectually back into the Stone Age for all I care (provided that Stone Age didn’t begin more than 6000 years ago), and students and their parents are free to pay nearly $30,000 a year for the right.

The shame, the travesty, and I will even say the injustice, is that thoughtful people who are academically trained in various disciplines, who are supportive of their tradition, who have given their lives to be thoughtful men and women of faith, and who in their experience and wisdom see the need to bring their disciplines into some conversation with that tradition, are barred from doing so, because … well … we just don’t do that around here.

Enns links to a newspaper report from Kevin Hardy of the (Chattanooga) Times Free Press, which clarifies that this tale of fraudulent Devolution in Monkey Town is even more depressing.

Like any good reporter, Hardy follows the money. In this case, though, that wasn’t hard to do — Bryan College is so eager to appease its conservative donors that it makes no effort to disguise the fact that they’re enthusiastically allowing them to dictate academic content:

In 2010, Ken Ham, a nationally known creationist who runs the Creation Museum in Petersburg, Ky., wrote a scathing article criticizing Bryan College because of a graduate’s book. The graduate, Rachel Held Evans, wrote about how she had questioned the nuances of her evangelical upbringing and had come to new realizations about the world, including the belief that evolution was part of God’s creation plan.

So Bryan College is fleeing from the one thing it can be proud of — being the alma mater of Rachel Held Evans — because Ken Ham is out there instructing donors to punish the school.

Ham also criticized biology professor Brian Eisenback, who was quoted in USA Today saying that he taught all origin views and theories — including Genesis and evolution — without revealing his own beliefs.

Genesis is a book in the Pentateuch. It is not an “origin view and theory.” I understand why the timid administrators of Bryan College, desperate to stroke their donors, would frame things so dishonestly and inaccurately. I do not understand why a journalist like Kevin Hardy would do so.

Eisenback and Bible professor Ken Turner gained attention last year for their grant from the BioLogos Foundation to write a new curriculum on science education that will marry scientific evidence with evangelical Christian perspectives on interpreting Scripture and science. BioLogos is a nonprofit that believes God created the world over billions of years and works to further the ideas of evolutionary creationism.

In the same year, Bryan’s Center for Origins Research was eliminated amid budget cuts. Todd Wood, who is one of the most well-respected young-earth creationist researchers in the country, was left without a job.

I cannot fathom what the phrase “one of the most well-respected young-earth creationist researchers in the country” can possibly mean.

It’s like the introductions for the various “experts” featured on those basic-cable shows about UFOs or cryptozoology (“Giorgio Tsoukalos is the world’s leading Ancient Astronaut expert …”). What, exactly, constitutes young-earth creationist “research“? I’m picturing someone in a lab coat with his eyes clamped shut and his fingers jammed into his ears, muttering “Don’t look at the stars … don’t look at the rocks … don’t look at the fossils … don’t look at the DNA …” (This doesn’t do much to dispel that image.) 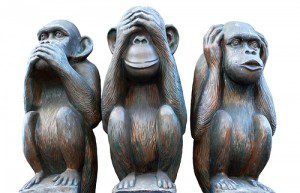 Last month, a chapel talk at Bryan featured a discussion with Wood and well-known evolutionary creationist Darrel Falk. At the end of their conversation, [Bryan College President Stephen] Livesay said he wanted to make a statement about Bryan College’s stance on origins. He said he did not agree with the views of BioLogos.

“Scripture always rises above anything else. Scripture rises above science. … Science at some point will catch up with the scripture,” Livesay said, according to an online podcast of the event.

[Bryan’s board president John] Haynes, the trustee, said Livesay has brought up the need for clarification several times to the board. Christians have increasingly begun to question traditional interpretations of Genesis, though he believes the Bible is clear on the matter.

“When you review these things, the first thing you must do is go back to the scripture and make sure what you’re saying is compatible with scripture,” he said. “Scripture judges you.”

Let’s repeat that with the subtext included.

“When you review these things, the first thing you must do is go back to what your donors say about the scripture and make sure what you’re saying is compatible with what the donors want you to say,” he said.

And the rules at Bryan College are clear: Biology professors and biblical studies professors are contractually obliged to lie to their students.

That’s not how it works at most evangelical colleges — most of the other 175 schools associated with the Council for Christian Colleges & Universities. At most evangelical colleges, biology professors and biblical studies professors are permitted to teach the truth of their disciplines in the classroom. They are not required to lie to their students.

That’s a longer, more complicated discussion, so we’ll get to that in part 2. 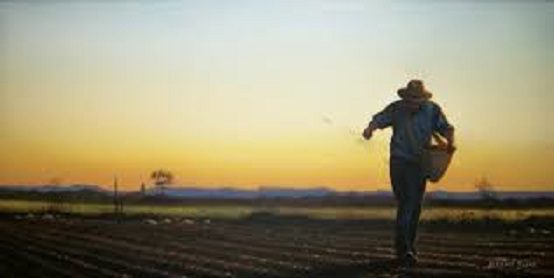 The Herding Blessing- The Carmina Gadelica Series
One thing the Carmina Gadelica has taught me over and over is...
view all Progressive Christian blogs
What Are Your Thoughts?leave a comment
Copyright 2008-2021, Patheos. All rights reserved.