• I know almost nothing about the Ukraine. I do know that the clumsy demagogic propaganda of a lawless 20th-century strongman doesn’t work anymore in most of the world, but Vladimir Putin seems confident he can still make it work in Russia and maybe he knows something I don’t. My guess is that events will unfold and unravel similar to the 11-step script Kevin Drum predicted on Saturday. (He’s been right so far with steps 1-5.)

The Guardian’s “Ukraine crisis” blog is a good source to keep track of events and developments. 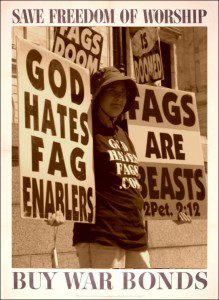 • Religious liberty and the sanctity of the family.

• I think this is the sort of thing David Brin calls “sousveillance.”

• Flip the script and look again. Shoe on other foot, sauce for the gander and all that. That’s what the Golden Rule is all about and that’s why I like this piece from Jonathan Merrit: “How Religious-Freedom Laws Could Come Back to Hurt the Faithful.”

It’s immensely depressing that Merritt couldn’t simply invoke the Great Commandment or appeal to empathy or sympathy from “the faithful” white evangelicals he’s trying to reach. His best hope of getting through to them, instead, was to resort to framing the Golden Rule as a kind of threat: If you make it permissible for you to do this to them, then someday they might be allowed to do this to you. Crude, but probably necessary when you’re dealing with folks so steeped in a purely punitive notion of morality.

The ancient King Solomon, a man Christians believe to be the wisest person ever to live, once wrote, “Whoever digs a pit will fall into it; if someone rolls a stone, it will roll back on them.”

If this is the pit that Christians intend to dig, they better line the bottom with pillows.

The Bird Bible may cause excessive cawing and attempted flight. The Bird Bible does not promise salvation for your soul or the souls of your children. Any feathers found inside The Bird Bible should be considered good luck and used to ward off evil spirits, including, but not limited to, the Devil himself. Any likeness to other birds living or dead is purely coincidental. Do not be alarmed if your Bird Bible has a faint egg smell. This is normal and healthy. No refunds or exchanges.

• When people ask me why I went to seminary if I wasn’t going to become a pastor, I can either give them the very long answer or I can give them the short answer. The short answer is this: Because Lawrence Taylor spoke and then his wife Tangie Taylor stood up and sang “His Eye Is on the Sparrow.” You had to be there.

Anyway, that’s also why this was my favorite moment from this year’s Academy Awards: