Guest post: ‘God is Done with You’: Pensacola Christian College and Sexual Violence

At Pensacola Christian College (PCC), a fundamentalist school similar in ideology and purpose to Bob Jones University and Patrick Henry College, there is a saying: “attending PCC is a privilege, not a right.” Students who attend here agree to abide by the Pathway, the school’s honor code, as well as signing an agreement that gives PCC the right to expel any student for any reason at any time.

When Beth* and David* signed this agreement, they had no idea they were going to be expelled for being raped.

Beth started attending PCC in September 2002 and almost instantly hit it off with a young man in her English class. He was on the “Praise Team,” one of the college’s PR efforts, and charmed everyone he met. He was friends with her brother, well-liked by her father, and by April they were “courting.” Beth innocently thought she had found the man she would spend the rest of her life with. 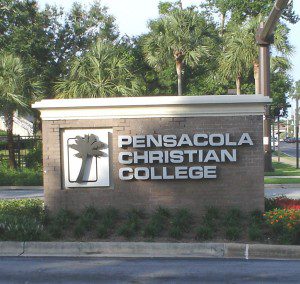 One night in May, however, she was grabbed, dragged into a construction area, beaten, restrained with bungee cord and duct tape, and then raped. As he was leaving her there, she recognized him as her boyfriend. A campus security guard discovered her, still restrained with the cord and tape, and took her to the campus clinic to file a report. In the next 24 hours, she went to the hospital, reported her attack to the police, and stayed the night with her parents. However, when she arrived back on campus with a black eye and a broken arm, her family was confronted by the dean of women and told that Beth was being expelled “because she is a fornicator.”

PCC took no action against Beth’s boyfriend. He graduated with honors and is now a pastor.

David started his college career intending to study law, until he realized that his heart belonged to the stage. But, in December 2012, during his sophomore year, his roommates in his male-only dormitory woke him up in the middle of the night, restrained him, gagged him, and then gang-raped him.

Confused and scared, he told his floorleader what had happened. A few days later he was called into a meeting with his residence manager who refused to listen to him and then gave him the maximum number of demerits for being “deceitful.”

But, the meetings didn’t end there. He was also called into Student Life, where he met with the assistant dean of men, “who asked me if I had been ‘harassed.’ I said ‘Yes, but…’ and he cut me off.” The dean then told him that he was being expelled.

“I had just been raped, and no one would believe me — it was a nightmare. The specific wording was stone cold professional. He kept quoting passages from the Bible about the evils of lying.”

David has been in counseling for the last six months, trying to overcome not only the horrible trauma of aggravated rape but also trying to heal from how the administration responded to him. Instead of being believed and respected, he was called a liar and then expelled.

Sexual violence on college campuses is a wide-spread problem that has drawn heavy media attention recently — it’s even gotten the President’s attention, and there is now increased focus on how universities respond to victims and their needs. Thanks to organizations like GRACE, many people now know that sexual violence isn’t isolated to secular colleges, and that just because a college is religiously-oriented doesn’t mean that they respond to victims appropriately.

Some have contended, however, that strict honor codes like PCC’s Pathway might actually prevent sexual violence from happening. Some have even gone so far as to claim that administrations at colleges like PCC have the right to be “suspicious” of victims because “rules at that school make it nearly impossible [for a victim] to even get into a situation like this.”

The problem isn’t just that universities like Pensacola Christian College, Bob Jones University, and Patrick Henry College are steeped in “purity culture” — a culture that teaches women who have sex are like used toothbrushes and half-eaten candybars: in a word, women are disposable. Purity culture is worth examining, but the heart of the problem at PCC is that purity culture is enshrined in the Pathway – and the Pathway makes it virtually impossible for victims to come forward, even more so than the roadblocks facing victims at secular colleges.

Whitney discovered exactly how the honor code makes it difficult for victims when she was expelled five days before the end of her junior year. She started dating one of her close friends in the beginning of the school year, in 2009. Almost immediately he began using threats and coercion against her, manipulating her, ignoring her repeated attempts to tell him no. She says that she “pleaded with him” to stop, but he never did.

Eventually, someone noticed and reported her to Student Life. After she’d been interrogated for over an hour, she “finally saw a chance to get help.” Instead of listening to her, however, they accused her of lying and told her that she was the one truly responsible for her boyfriend’s assaults. At the end of their meeting, the dean of women looked at Whitney and said that she was a “dirty vessel, and God can’t use a dirty vessel. He is done with you.” She was expelled that afternoon, and tried to commit suicide twice in the following month.

That is what these extremely strict morality codes do at these colleges. They actively prevent the administration from seeing a victim’s situation clearly. Because the administration is more committed to enforcing the honor code than they are to helping victims, they are incapable of giving a victim the protection he or she needs to come forward about their assault. This is also compounded by their need to make sure that their reputation as a “safe” place for fundamentalist parents to send their children remains intact, regardless of whose lives they might destroy. At these colleges, students are terrified of explaining to someone — anyone, including the police — what they are going through because the risk of being expelled is constantly hanging over their head.

Not only do these honor codes make it impossible for the administration to respond to victims appropriately, they also make it impossible for victims to see their own victimization. In the dozens of interviews the author conducted with young men and women who had been expelled or shamed for their assaults, they repeatedly used words like “cowardice” and “shame” to describe their experiences. Because they might have technically broken some rule, they couldn’t see the abusive tactics used by their assailants that forced them into places and situations against their will. They blamed themselves for what happened instead of realizing that they were manipulated and coerced.

In the end, the honor codes at these schools actually have the exact opposite result of what was intended: instead of protecting students, the code actually makes these campuses an even more violent, hostile, unsafe place where victims are not allowed to speak.

*names have been changed

March 11, 2014
'An evangelical pastor's path to embracing people who are LGBT into the company of Jesus'
Next Post

March 11, 2014 Touched by an Angel: A guide to the religious appeal of TV's knights errant
Recent Comments
0 | Leave a Comment
Browse Our Archives
Related posts from slacktivist