‘An evangelical pastor’s path to embracing people who are LGBT into the company of Jesus’ March 11, 2014 Fred Clark

Ken Wilson is the pastor of a large, midwestern evangelical church — the Vineyard Church Ann Arbor.

He also seems to be a fairly average, fairly representative evangelical pastor of an evangelical church. Ken Wilson isn’t somebody I’d ever heard of before. He’s previously written a few books — on pastoral topics like prayer, not flashy, ladder-climbing topics like the secret Bible keys to health and wealth, or how to take back America for Jesus. He’s neither a dangerous “liberal” revolutionary nor a feverish right-wing culture warrior. 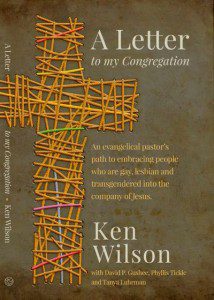 Sure, he’s written about “contemplative” prayer, and he’s argued that Christians have an obligation to be good stewards of the environment. Both of those are viewed with suspicion by some branches of white evangelicalism, but the same people who wold look askance at him for that are the same sort of people who would be upset to learn that his congregation uses drums and guitars in its worship music.

Because, as Tony Jones reports, Ken Wilson has just written a book urging evangelical Christians in America to welcome LGBT Christians in every aspect of the church and the church community.

This is interesting. And potentially kind of a big deal. Wilson isn’t like Rob Bell or Brian McLaren — a former pastor already labeled with the tribal warning sign of “controversy.” He is an until-now non-controversial member of the tribe, and he’s still an evangelical pastor writing as an evangelical pastor. The title, and format, of his book is A Letter to My Congregation.

That foreword is also interesting and also potentially a BFD. It’s by David P. Gushee — a Southern Baptist ethicist who has long challenged some of the assumptions of the tribe while also approaching his work so scrupulously that his evangelical membership card has never been questioned. He even taught at Al Mohler’s Southern Seminary for a while — after Mohler had purged all the supposedly ungodly liberals. Despite a history of some unsavory associations — having a doctorate from Union Seminary, and working with folks like Ron Sider, post-expulsion Rich Cizik, and the dirty hippies at Sojourners — Gushee has maintained a reputation as a respected member of the evangelical mainstream.

Until now, at least. This will probably cost him. Gushee’s foreword means that Wilson’s book becomes far more likely to get the attention of the mainstream evangelical tribe, but it also means that Gushee himself will now be ushered out to join Bell and McLaren and a growing multitude of others now categorized as enemies of the One True Faith.

After all, Wilson’s book also has a foreword written by Phyllis Tickle — someone already doubly damned by tribal gatekeepers because she’s part of the “emergent” church movement and because she’s a she.

I haven’t read A Letter to My Congregation, but based on this interview with Wilson and on Naum’s review of the book,* I think it really does say That Which We Are Not Allowed To Say in the white evangelical tribe.

Naum says Wilson wants to find a “third way” — which, like all “third way” fence-sitting, sounds disappointing and cowardly.  After all, some folks in the early church tried to find a “third way” between exclusion and inclusion so as to remove offense.  Let’s split the difference, they said, don’t exclude the Gentiles, but make them get circumcised first. St. Paul didn’t think much of that “third way.”

But then Wilson also acknowledges that fearfulness, admitting that his timid desire for something other than unqualified inclusion is “based in large part the fear of being branded a ‘heretic’ by evangelical cohorts.”

That branding is inevitable, so as long as you’re in, and in for good, you might as well go the whole hog. I’m hoping Wilson’s book does. It’d be a shame to see him and his church and the fine folks writing forewords for him all get themselves branded as heretics for nothing more than a tepid “third way.”

* Thats’s Naum from the terrific Tumblr AZspot, who seems to read everything.

March 11, 2014 Guest post: 'God is Done with You': Pensacola Christian College and Sexual Violence
Recent Comments
0 | Leave a Comment
"Unlikely - the person being investigated was the lawyer for at least two people, going ..."
P J Evans Much obliged
"A non-family conservator, one who would let her have some money to spend, but not ..."
P J Evans Much obliged
"It might be related to the internet phenomenon of "troll-shielding," where a person with qualities ..."
Turcano Much obliged
"Usually someone who has another person in charge of their finances is not going to ..."
Petuniapp Much obliged
Browse Our Archives
get the latest from
slacktivist
Sign up for our newsletter
POPULAR AT PATHEOS Progressive Christian
1