Fred and Anti-Fred, a grace note

In writing about Fred and Anti-Fred — the polar opposite ministers Fred Rogers and Fred Phelps — I missed a felicitous/providential grace note from yesterday’s news: Fred Phelps died on Fred Rogers birthday.

It is eerie symmetry that the day of Fred Phelps died is also the day Fred Rogers would have turned 86. I am tempted to call it karma, and to crow that such coincidence offers indisputable proof that in the mind of God, the good Fred wins. But hey, it’s Mister Rogers’ birthday, and so I can only do what he would do:

Pray that now, with the Minister of Hate gone, some poor soldier can finally get his rest, and some poor child get her sleep.

Junod, who wrote that remarkable profile of Rogers we discussed the other day, also notes another connection of sorts that I hadn’t remembered between Fred and Anti-Fred — Phelps’ hateful crew picketed at Mister Rogers’ 2003 funeral in Pittsburgh:

The police moved in, out of fear that the confrontation might escalate into the violence that Phelps apparently craved. (What I heard, even then, was that he made his living filing lawsuits against those he’d provoked into some kind of physical response.) 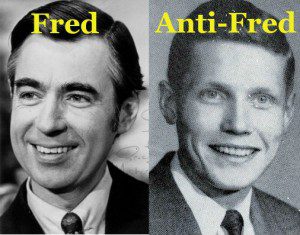 I don’t remember anything they said. What I do remember was how their children looked, and the keen and nearly overwhelming sense of loss the appearance of their children elicited. There were so many of them, for one thing; the Westboro congregation turned out to be a young one, and even some of the lank-haired women holding signs and spitting epithets turned out be, on closer inspection, teenagers. And they were all so poor. I’m not speaking simply of their clothes, and their teeth, and their grammar, or any of the other markers of class in America. I’m speaking of their poverty of spirit. Whether they were sixteen or six, they looked to be already exhausted, already depleted, with greasy hair, dirty faces, and circles under their eyes that had already hardened into purplish dents. They looked as if they were far from home, and didn’t know where they were going next. They looked, in truth, not just poorly taken care of, but abused, if not physically then by a belief inimical to childhood — the belief that to be alive is to hate and be hated.

It was the condition of those children that was the true profanation of the funeral of Fred McFeely Rogers.

The name means “peace.” Peace and Anti-Peace — those are always two available options.

• Let’s make the most of this beautiful day

• The Anti-Fred is dead. Look for the helpers.