The Anti-Fred is dead. Look for the helpers.

The Rev. Fred Phelps, founder and longtime leader of the Westboro Baptist Church and the crafter of its gospel of hate, has died. He was 84.

Phelps’ public persona perversely served one useful function. He provided a handy superlative for hate and bigotry, one that served as a warning sign and guardrail for other, slightly less exuberant haters, and that helped to refute their absurd claims of “persecution.” Fred Phelps lived and died a free man. That fact proves — proves, beyond any shadow of a doubt — that anyone blathering about the criminalizing of their anti-gay religious views is a liar and/or a fool.

But in keeping with what I wrote the other day — “Let’s make the most of this beautiful day” — I still don’t feel like dwelling on Phelps or his hateful message. He was the Anti-Fred, and I’d rather mark the occasion of his death by thinking about something his polar opposite — Fred Rogers — taught us.

By word and by example, Mister Rogers taught us all many things. Including this: 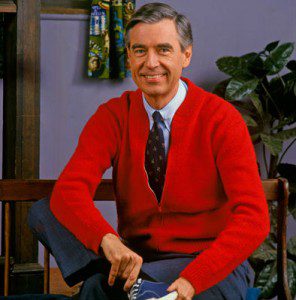 For me, as for all children, the world could have come to seem a scary place to live. But I felt secure with my parents, and they let me know that we were safely together whenever I showed concern about accounts of alarming events in the world.

There was something else my mother did that I’ve always remembered: “Always look for the helpers,” she’d tell me. “There’s always someone who is trying to help.” I did, and I came to see that the world is full of doctors and nurses, police and firemen, volunteers, neighbors and friends who are ready to jump in to help when things go wrong.

… To this day, especially in times of disaster, I remember my mother’s words, and I am always comforted by realizing that there are still so many helpers — so many caring people in this world.

That is how I choose to mark the passing of poor, unhappy Fred Phelps. Phelps refused to join the helpers. When things went wrong, he and his followers would rush to the scene to try their best to make things worse. He created another challenge for the helpers, but the beautiful thing about Fred Phelps’ ugly life was that so often the helpers rose to meet that challenge.

Phelps’ message of division ultimately wound up bringing people together. His gospel of hate became a constant reminder that we are always also able to respond with love. And so if you look back on Phelps nasty activism and you zoom out a bit to see the bigger picture, you’ll see that wherever he went there was always also someone else who was trying to help.

One of my favorite examples of that was the “angel action” staged by some good folks in Laramie, Wyoming, when Phelps and his crew arrived there to picket during the trial of the two young men who killed Matthew Shepard. Thinking of that story the other day led me to go back and re-watch the movie version of The Laramie Project, the remarkable play compiled by Moisés Kaufman and the Tectonic Theater Project from the actual words of actual people gleaned in hundreds of hours of interviews. The entire play is, for the moment at least, available on YouTube:

There’s a scene in The Laramie Project involving one Wyoming student who, against his parents’ wishes, won the lead role in a university production of Angels in America. That scene is a brief snippet of a play within a play, with Tony Kushner’s gorgeous language from Angels’ concluding monologue at the fountain. Those words were written by a great playwright, crafted and polished to make them beautiful and inspiring. But the astonishing thing about The Laramie Project is that there are many other scenes that include language that is just as beautiful and inspiring. Those words were not written, but spoken, unrehearsed, by ordinary people during ordinary conversation. When you watch the play, you have to keep reminding yourself of that — that these words were not crafted by poets, but simply transcribed from a recording of an ordinary conversation with an ordinary person. And ordinary people, it turns out, are capable of great and inspiring beauty. They are fabulous creatures, each and every one.

Fred Phelps has died on the first day of spring. The world only spins forward. Look for the helpers.

March 20, 2014
Bill Gothard's sexual coercion is a feature of Gothardism
Next Post