Young-Earth creationism and the light of distant stars

Go outside and look up at the sky. Wait, is it day or night? Should’ve asked that first.

You can get a glimpse of what the sun looks like right this very moment. Just wait eight minutes, then look again.

If it’s nighttime, this gets a bit more complicated. If it’s not cloudy and you’re not downtown in some light-polluted big city, you should see stars — hundreds of them, or even thousands if you’re far enough away from those city lights and there’s no full moon. But again, you’re not seeing those dozens/hundreds/thousands of stars as they are right this very moment, you’re seeing what they looked like back when the light that’s just now reaching us first left them.

That really bright one, for example … no, not that one. That’s not a star, that’s Venus. The other really bright one — look, see the big bow tie? OK, see those three stars in a row across the middle of the bowtie? Draw a line through those and keep going down and to the left to that really bright star. That one, yes, good.

That’s Sirius. Sirius is about 8.6 light years away, so that bluish light you’re looking at is 8.6 years old. You’re looking back in time. You’re seeing what Sirius looked like back when Countrywide was still a hot stock.

OK, go back to the bow tie, or Orion, to use it’s biblical name (or, rather, the Greek name anachronistically used in our English translations of the Hebrew scriptures). Follow that line of stars up and to the right and you’ll see a big reddish-orange star. That’s Aldebaran. It’s about 65 light years away — meaning you’re seeing what Aldebaran looked like in 1949.

How cool is that? I wasn’t born yet in 1949. I can look at photographs from the world of 1949, but I can’t look out my window and see President Truman walking down the street. Yet I can walk outside at night and look up and there, plainly visible, is the reddish-orange glow of 1949. I can see through time. (Everyone can, of course, but I’m not going to let that ruin the fun of sometimes basking in this ability as some kind of super power.)

Now, see how Aldebaran is part of a little V-shape of stars there? Follow the left side of that V up for a bit and you’ll come to the Crab Nebula. It doesn’t look much like a crab or a nebula to the naked eye, but point a good telescope at that fuzzy little star and you’ll see something pretty amazing. You’ll see this: 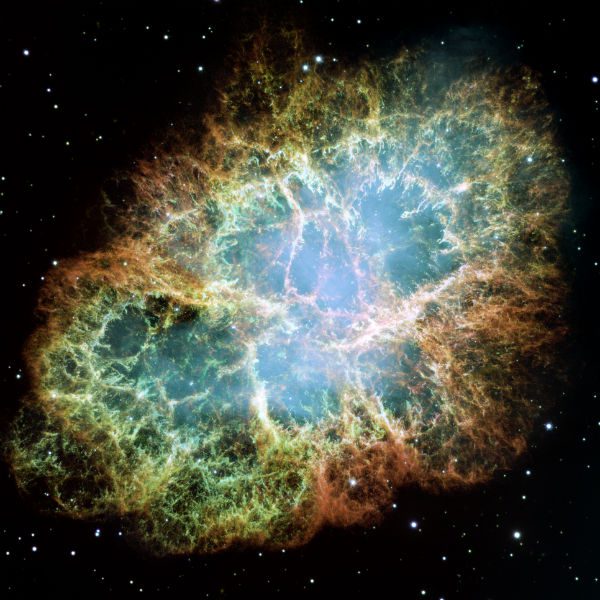 And this is where things get complicated for young-Earth creationism, an ideology that says, among other things, that there’s no such thing as 4,500 BCE.

This is part of why Neil deGrasse Tyson focused on the Crab Nebula in a recent episode of his show Cosmos. It wasn’t the only reason, of course. The Crab Nebula is weird and beautiful and it’s got this crazy pulsar at the heart of it — all of which makes it just exactly the sort of thing that gets Tyson so contagiously jazzed. But that distance of 6,500 light years also makes the nebula a perfect illustration of why the vast distances of space create a problem for young-Earth creationism. Seeing across such vast distances involves looking back into a distant past that YEC says cannot exist.

Here’s how Tyson put it on Cosmos:

The Crab Nebula is about 6,500 light years from Earth. According to some beliefs, that’s the age of the whole universe. But if the universe were only 6,500 years old, how could we see the light from anything more distant than the Crab Nebula? We couldn’t. There wouldn’t have been enough time for the light to get to Earth from anywhere farther away than 6,500 light years in any direction. … To believe in a universe as young as six or seven thousand years old is to extinguish the light from most of the galaxy — not to mention the light from all the hundred billion other galaxies in the observable universe.

The Huffington Post characterized that segment of Tyson’s show as him “blasting” creationist views, and Travis Gettys described it as the scientist “trolling” and “toying with” young-Earth creationists. HuffPo even said this segment was “out of character,” quoting an interview in which Tyson said he prefers not to correct misinformation directly so much as to offer “a kind of inoculation against the fuzzy thinking of these weird ideas floating around out there.”

Unlike the HuffPo writer, I think “inoculation” is a good description of what Tyson was up to in the quote cited above. He’s not addressing creationists directly there, but rather inoculating the general public against their weird ideas. The observable universe is, in fact, far, far older than six or seven thousand years. We have photographic evidence that this is true.

Tyson has been butting heads with creationists long enough to know that such conclusive photographic evidence doesn’t change their minds. He knows that devoted young-Earth creationists are aware of the problem that the light from distant stars poses to their young-universe ideology. Creationists recognize this is a problem for them. They appreciate that the amazing telescopes we have today don’t just allow us to see across vast distances, but to see back into time — back into a past that young-Earth creationism claims does not exist.

And so I’m sure that Neal deGrasse Tyson also knows that creationists have a handful prepared replies and responses to that problem.

I call these replies and responses rather than answers or solutions because none of them is credible enough to withstand any serious examination. But that’s not what they’re for. These various responses aren’t intended to defend creationist claims against the reality revealed by telescopes. Nor are they intended as a defense of creationism against the arguments made by scientists like Neal deGrasse Tyson. They’re not trying to respond to people like Tyson — they’re not trying to persuade real scientists that their YEC claims are defensible. The intended audience for these replies is strictly their followers. (And, of course, their financial supporters — since Tyson does not appear as a recurring donor in their direct-mail databases, they don’t much care what he thinks.)

The whole point of these creationist replies to the problem of telescopes is to reassure their followers and donors that, yes, smarty-pants over there has a telescope and he thinks that means something, but don’t you worry, we can account for that. We know all about the vast size of the universe, but that’s no threat to our ideology because mumble mumble mumble.

I want to take a closer look at that mumbling and at the various ways that different young-Earth creationists attempt to dismiss the problem of telescopes. But it’s been a while since I clicked that “publish” button, so let’s save that discussion for part 2.

April 3, 2014 Young-Earth creationism and the problem of telescopes (part 2)
Recent Comments
0 | Leave a Comment
"Agreed on the second point, definitely - I'd argue that it's more important to get ..."
Jim Roberts 10/6 Flashback: Latter daze
"I had a rather strange dream last night. It was set in this huge mansion ..."
Professor Rudolf Laschenkohl 10/6 Flashback: Latter daze
"Lemon juice works on hair pretty well. I use it for a scalp condition. Too ..."
MaryKaye Smart people saying smart things (10.5.22)
"Hmmm. That's not really what he's saying I think - and he's got a very, ..."
Scurra 10/6 Flashback: Latter daze
Browse Our Archives
Related posts from slacktivist