What kind of story is this?

Tomorrow night, Game of Thrones returns, and I’m thinking again of what Scott Paeth said about the story that George R.R. Martin, Benioff and Weiss are telling us:

I still have cause to wonder whether or not Martin has any such transcendent moral vision in store for us at the end of his story. Thus far he’s been fairly scornful of the idea that the end result of the political struggle is the establishment of social justice, and seems to be suggesting that, in the end, all succumbs to dust and entropy, or that on the whole those willing to give themselves wholly over to their will to power will ultimately prevail.

How he ends his story will tell us much about the moral world in which he dwells. 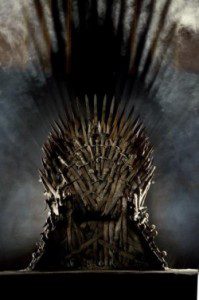 Like Paeth, I enjoyed George Schmidt’s Niebuhrian discussion of the contrast between noble Ned Stark and pragmatic Tyrian Lannister. But we don’t really know, yet, what Tyrian’s story means because we don’t yet know where it’s going. He seems to be chasing after some kind of redemption, but it’s far from clear whether or not his story takes place in a world that would allow that. The Imp seems to value many things other than pure power, and in this story, so far, that doesn’t bode well for his survival.

I’ve read quite a bit of speculation as to who it is who will ultimately “win” the Game of Thrones — who will finally claim the Iron Throne. That prize has so far been won mainly by those who thought it was the Most Important Thing, which tends to be true of imperial thrones and the people who manage to sit on them. But it seems to me that Martin knows better. I don’t think he believes that prize is the Most Important Thing and I don’t think he’s telling us the kind of story in which it represents the ultimate reward. But again, we can’t really know what kind of story he’s telling us until we learn how it ends.

And for now, actually, I’m quite happy that it hasn’t yet ended. I’m enjoying this. I’m enjoying wondering what happens next and wondering, even, what kind of story it is we’re dealing with. That wondering and anticipation necessarily involves the possibility of disappointment, or even of what might feel like betrayal. But so far, Martin and his comrades at HBO have earned my trust.

It helps, though — spoiler alert — to have sneaked a peak ahead by reading “Mercy” an excerpt from Winds of Winter, which Martin recently released as an appetizer to the sixth book in his saga. That excerpt includes two characters whom I’m hoping will survive to find some kind of redemption. While neither quite seems on the road to redemption here, they’re both still on a road — still alive, at least. If that weren’t true in either case then I would be very cross with Mr. Martin.

This business of spoilers gets tricky when dealing with a TV series that is also a series of books. Martin has so far published the first five of what he says will be seven books in the series that tells this story. The show’s first three seasons have covered most of the first three books in that series. That means those who have read all of the books are aware of future plot points that those of us only watching the show haven’t yet learned about, and so I’ve had to be careful discussing season four of Game of Thrones with friends who have read all five books.

But no one has yet read all seven books, because the sixth has not yet been finished and the seventh has not yet been written. I think that changes the dynamic of the show for readers and non-readers of the books alike. Had the whole series of books already been finished — published and widely read — then readers might tune in to the show wondering about how the story would be adapted and portrayed, but not still wondering how it would end. As it is, even those who have already read the first five books are watching the show closely in the hopes of learning something new — something they might have missed — about where it’s all headed. And those of us who haven’t yet read the books aren’t even able to ask friends who have to tell us — no, wait, don’t tell us … no, just tell us a little bit … — for sure what we can expect.

One other good thing about producing the show now is that it puts some helpful pressure on Martin to finish his story. He spent five years writing the fifth book in his series. He’s got maybe five years to wrap things up if he doesn’t want the show to get ahead of the books. So maybe the production of the show will prod him into finishing and publishing the seventh and final book of the series, A Dream of Spring, sometime before 2020.

Until then, we won’t know how the story ends, and so until then we won’t know for sure what the story means. That title, though — A Dream of Spring — hints that it may mean something better and truer than “in the end, all succumbs to dust and entropy, or that on the whole those willing to give themselves wholly over to their will to power will ultimately prevail.” I hope.

April 8, 2014 From their place on high to the dirty ground
Recent Comments
0 | Leave a Comment
"Yeah, as fellow resident old person who saw the TV series (don't remember ever watching ..."
Amaryllis The IMDB “Goofs” page for the ..."
"https://art.penny-arcade.co..."
Turcano The IMDB “Goofs” page for the ..."
"Today's food bank menu:Chili and fixin's--frozen ground beef from last month's food bank run, tomatoes ..."
Jenny Islander ‘The redeeming effects of the Christian ..."
"Speaking more to the theme of the tradition, hoopoes are prominent members of the bird ..."
damanoid ‘The redeeming effects of the Christian ..."
Browse Our Archives
get the latest updates from
slacktivist
and the Patheos
Progressive Christian
Channel
POPULAR AT PATHEOS Progressive Christian
1