Go and learn what this means: Lawful evil, chaotic good and B.A.D.D. theology

At io9, Annalee Newitz has written a fun look back at “How We Won the War on Dungeons & Dragons“:

Thirty years ago, a war raged between the dorks who played Dungeons & Dragons, and the conservative parent groups who believed that gaming was debauched at best and Satanic at worst. Lives were ruined. People died. And now that war is over. I still can’t believe we won.

Newitz’s account details one tangential battle of the Satanic Panic that arose in the 1980s — a moral panic that resulted in students being expelled from schools, young people being bullied by their peers or institutionalized by their parents, and dozens of innocent people spending years in prison for crimes that never even occurred.

The astonishing thing, as Newitz says, is that today, a few decades later, “D&D-influenced stories” are a noncontroversial part of mainstream American pop culture. That’s not what anyone would have predicted back during the Reagan years, when Satanic baby-killer politics first arose, bringing with it a whole host of demonizing delusions — a diabolical conspiracy of black-robed ritual abusers, fears of backward-masking messages in rock music, the presumption of a suicide epidemic among RPG enthusiasts. If you remember the 1980s, it’s jarring to step back today and realize how much of that has simply faded away and lost its power. The same folks who were able to bully D&D to the sidelines in the 1980s found themselves steamrolled when they later tried the same tactics against Harry Potter and his fans.

Think of that moment when President George W. Bush joked with Ozzy Osbourne at the White House Correspondents Dinner. When Bush’s father was president, Ozzy was a favorite bogeyman of the moral panic — a stock character inserted into some of the most outrageous urban legends spread by the ascendent anti-Satanists of the righteous right. A few years later and Ozzy had become a beloved celebrity, embraced even by the conservative establishment as a quirky, harmless sit-com dad figure.

The politics of righteous opposition to Satanic baby-killers still dominates, but much of what initially fueled its fire now seems hopelessly weird and, as Newitz says, “shabby.” She links to this once-influential pamphlet from the notoriously dishonest anti-fun group B.A.D.D. (Bothered About Dungeons & Dragons), noting how today it seems as dated as an artifact from the Salem witch trials.

James McGrath highlights a terrific comment to Newitz’s post, in which shadowling repurposes a classic joke from John Rogers: “It was never a fair fight between fundamentalist Christianity and D&D. One was a dangerous system full of dark mysticism and threats to warp a young mind beyond repair, and the other was a tabletop RPG.”

Back in the 1980s I was part of both of those worlds. I was a young fundamentalist Christian and a big fan of tabletop RPGs. The anti-Dungeons & Dragons hysteria meant that it was easier for us to play other games — like the cheaper imitation, “Tunnels & Trolls,” and then, later, Middle-Earth Role Playing. (That last one was set in J.R.R. Tolkien’s fictional world, which made it easier to defend in our evangelical subculture because it was like having C.S. Lewis in our corner.)

The moral panic of the anti-D&D crusaders was sheer nonsense, but those fundie moral crusaders weren’t wrong to fear the threat that such games posed to their ideology. Fundamentalist ideology is a fragile thing, after all, so almost anything other than itself is correctly viewed as a subversive threat.

But while the anti-RPG forces were preoccupied with the supposed “Satanic” dark sorceries they claimed were involved in the game, they overlooked one way in which D&D actually was a subversive threat to the white evangelical ideology I was raised in.

That threat had nothing to do with monsters or magic. It had to do with “alignment” — the short-hand system for categorizing the moral outlook of the character you were playing.

Some of those “bothered” by D&D noticed this, worrying that the game allowed us to play evil characters, but they didn’t pay attention to the really interesting aspect of D&D’s alignment categories. Those categories didn’t just distinguish between Good Guys and Bad Guys, but also between what it called order and chaos. Thus every character wasn’t just good, evil or neutral, but also lawful, chaotic or neutral. If you’re unfamiliar with that scheme, this illustration using characters from Game of Thrones (sadly separated from the anonymous Internet genius who produced it*) gives an idea of the options suggested by its nine categories. 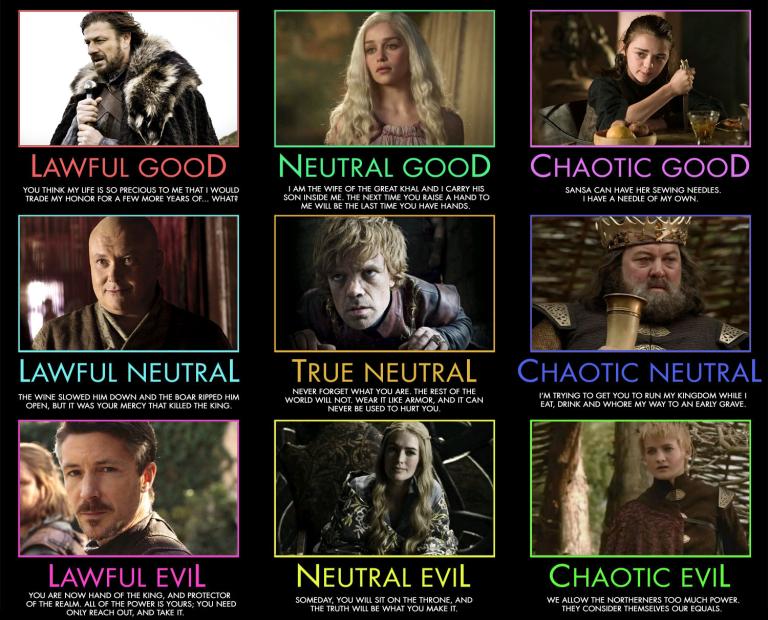 One can quibble with the terminology of D&D’s scheme, and with whether its simplicity — a useful feature for the mechanics of the game — is overly simplistic. But these categories can also be evocative and insightful when considered in contexts other than the game. Consider, for example, the cast of characters presented in the Woody Guthrie song “Pretty Boy Floyd.” Guthrie casts Floyd as a modern-day Robin Hood — a classic “chaotic good” hero challenging the lawful evil fountain-pen wielding bankers as he eludes the lawful neutral G-men sent by the neutral evil J. Edgar Hoover.

Think what that second dimension of D&D’s alignment meant for my friends and I, as kids who grew up steeped in the ideology of white evangelicalism and fundamentalist Christianity. That ideology made no distinction between “lawful” and “good.” It allowed for no such distinction: To be good meant to follow the rules; to follow the rules meant to be good.

But now we were confronted with a new possibility, a new vocabulary that allowed us to articulate something we had suspected was true all along. “Go and learn what this means: Lawful evil. Lawful neutral. Chaotic good.” To be good might mean something more than following the rules. To be good might mean something separate from following the rules. And it was possible to follow the rules without being good.

It says something about the sorry state of biblical understanding among biblical “inerrantists” that we were left to learn this from Gary Gygax rather than from Galatians, Isaiah, Amos or the Gospels. But once we learned it — once we came to see the possibility of it — then the whole ideology we’d been taught came into question.

The business of “alignment” was also useful for gauging gamers themselves. Assigning and choosing alignment for characters was part of the mechanics of the game. It belonged to our world, in other words — to the world of dice and pencils and graph paper and not to the world of the characters themselves. Gamers who didn’t make that distinction — who played their characters as though those characters themselves were aware of their alignments, their levels, armor class, etc. — tended to be less fun to play with. They tended either to be less imaginative or, even worse, to be the sort of player who was always trying to game the game — to manipulate the mechanics in a way that made the whole thing more about scoring points than about slaying dragons or solving quests.

Those point-scoring gamers of the game weren’t technically cheaters, but they could ruin the game just as surely as any cheater could. They knew the rules better than anyone at TSR. They studied those rules, seeking loopholes to be exploited for any advantage, twisting the game into some kind of lawyerly exercise. Playing with them meant sitting around discussing the rules — which is to say it meant not playing at all.

Remind you of anyone?

* Thank you EndOfTheWorld for allowing us to give credit where credit is due. The chart is by Christopher Bird, who’s done lots of these under the tag “D&D Explains Everything.” Brilliant.

April 8, 2014
From their place on high to the dirty ground
Next Post