Right-wing hero and welfare-fraudster Cliven Bundy is a big honking racist, but you probably already knew that

Everyone was shocked this week to learn that right-wing gun-nut, “militia” hero and anti-American “patriot” Cliven Bundy is also a frothing racist white supremacist who believes “Negroes” were “better off as slaves.” And when I say that everyone was shocked, I mean of course that no one should have been surprised even slightly, because duh.

Here are Bundy’s comments — which were delivered voluntarily at a press conference, in public, as reported by Adam Nagourney of The New York Times:

“And because they were basically on government subsidy, so now what do they do?” he asked. “They abort their young children, they put their young men in jail, because they never learned how to pick cotton. And I’ve often wondered, are they better off as slaves, picking cotton and having a family life and doing things, or are they better off under government subsidy? They didn’t get no more freedom. They got less freedom.”

This is from a man who has recently become Fox-News-famous for his refusal to pay for grazing his cattle on public land. Cliven Bundy, in other words, is wholly dependent on “government subsidy.” The mythic “welfare queens” in Cadillacs and Ronald Reagan’s fantasy nightmare of “strapping young bucks” buying steak with food stamps paid for by white people don’t actually exist, but there is such a thing as welfare fraud and Cliven Bundy is what it looks like.

As Paul Waldman notes, everything about this Bundy yahoo suggested that we already knew what he would say if he ever admitted what he thinks he “knows about the Negro”:

When conservatives looked at Bundy, they saw not just a white guy, but also a cowboy, and that particular brand of character who waves an American flag while fighting the American government (in his case by stealing public property). And they saw lots of guns, which also told them he was their kind of people. Everything about him told them he was their kind of guy. And I’m sure if liberals had thought about it, they would have said, “I’ll bet this guy has some colorful ideas about race.” Conservatives would have protested that that’s a vicious and unfair stereotype. But in this case it turned out to be true, and how. 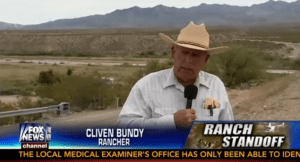 One couldn’t help but be reminded of the mini-controversy over Duck Dynasty star Phil Robertson back in December, who got in trouble for some comments that were quite similar to Bundy’s. In Robertson’s case, he didn’t reach all the way back to slavery. He just said blacks were happier during the Jim Crow days of his youth: “I never, with my eyes, saw the mistreatment of any black person. Not once…they’re singing and happy. I never heard one of them, one black person, say, ‘I tell you what: These doggone white people’—not a word!… Pre-entitlement, pre-welfare, you say: Were they happy? They were godly; they were happy; no one was singing the blues.” Sarah Palin admitted that she didn’t even know what Robertson had said even as she was loudly defending him against unfair liberal attacks. Why? Well, because he too was her kind of people — Southern, Christian, gun-loving, liberal-hater. What else do you need to know?

As Cliven Bundy shows, you need to know more than that. … If you’re going to construct your politics around defining who “us” and “them” is, don’t be surprised when your new allies have some rather sharp beliefs about “them.”

Anyone care to guess what Cliven Bundy thinks about LGBT people? Do you think we even need to ask?

Kevin Drum marvels that Bundy’s Klan-eruption seems to have caught many of his Republican admirers by surprise:

Conservatives should never have rallied around Bundy in the first place, but if they’re even minimally self-aware about his particular niche in the conservative base, surely they should have seen something like this coming and kept their distance just out of sheer self-preservation. But apparently they didn’t. They didn’t have a clue that a guy like Bundy was almost certain to backfire on them eventually. They seem to have spent so long furiously denying so much as a shred of racial resentment anywhere in their base that they’ve drunk their own Kool-Aid.

At the very least, you’d think Republicans would have learned to put their Bundy-Robertson-Nugent faction on a three-second broadcast delay, so that whenever they say something like “I want to tell you one more thing I know about the Jews” they could cut the mic.

Somewhere in America, perhaps, there is a perpetually angry white guy who loves his guns and hates the government and yet is not also a flaming racist bigot. Somewhere in America, perhaps, there is an “anti-government” militia enthusiast whose seething resentment of supposedly extravagant “government handouts to the poor” is not driven by racial animus. But such men, if they exist at all, are very rare exceptions.*

Cliven Bundy was poster-boy of the moment for the loves-guns, hates-government strain of white conservatism. That movement traces back to the terrorist backlash against Reconstruction and it remains inextricably intertwined with white supremacy.

This is unsurprising. White supremacy is one of the most dominant forces in the history of American politics. In a democracy, it would be silly to expect it to go unexpressed. Thus anyone with a sense of American history should be equally unsurprised to discover that rugged individualist Cliven Bundy is the bearer of some very interesting theories.

Consider this yet another reminder that “intersectionality” may be a new term, but it’s a very old idea. The reactionary right has always been intersectional.

* Yes, you can find extreme cynics like the late Lee Atwater who embrace all of that anti-government, guns, militia, anti-“welfare” (for those people) rhetoric based on a disinterested political calculus. For Atwater, promoting racist ideologies was “nothing personal.” His main motive didn’t seem to be personal animus, but rather his belief that racist voters were a key component of the tribal coalition he needed to build to secure political power. Atwater, in other words, was a racist even though he may not have believed that racism was true. (It’s possible he did, and it’s possible he didn’t, but the bottom line was that he didn’t care whether or not it was true. He only cared if it “worked.”)