You go down there once too often and you’re likely to remain April 24, 2014 Fred Clark

• I’m sad to read the farewells from vorjack and Daniel Florien at Unreasonable Faith — two terrific bloggers who were always sharp, interesting and fun to read. My thanks and best wishes to both of them.

• Since David Barton is still spreading the obvious and deliberate lie that “The Obama administration has refused to prosecute any child pornography,” we should probably offer our usual prophylactic here against potential future Barton lies.

Yes, President Obama spoke about Easter, and, yes, his Easter greeting mentioned his Christian faith: “Michelle, Malia, Sasha, and I … join our fellow Christians around the world in celebrating the resurrection of Christ, the salvation he offered the world, and the hope that comes with the Easter season.”

The Easter lies will be particularly interesting this year, since the religious right has already loudly criticized Obama for asking a gay Christian, retired Episcopal Bishop Gene Robinson, to give the closing prayer at the fifth annual White House Easter Prayer Breakfast. If you think that means that these same people won’t later go back to pretending there was no such event, or that Obama skipped it, or that he’s never even said the word “Easter,” then you haven’t been paying attention to the Barton wing of the religious right.

• I am sorry to say that the photo below is not taken from an upcoming Disney film in which the capybara is voiced by John Goodman and the bird by Wanda Sykes. I would have enjoyed that movie. But the good news is that this photo and many others like it can be found on the Tumblr “Animals Sitting on Capybaras,” which is one of those things I didn’t realize I wanted to see until someone made it, at which point I realized, ah, yes, the world needed this. 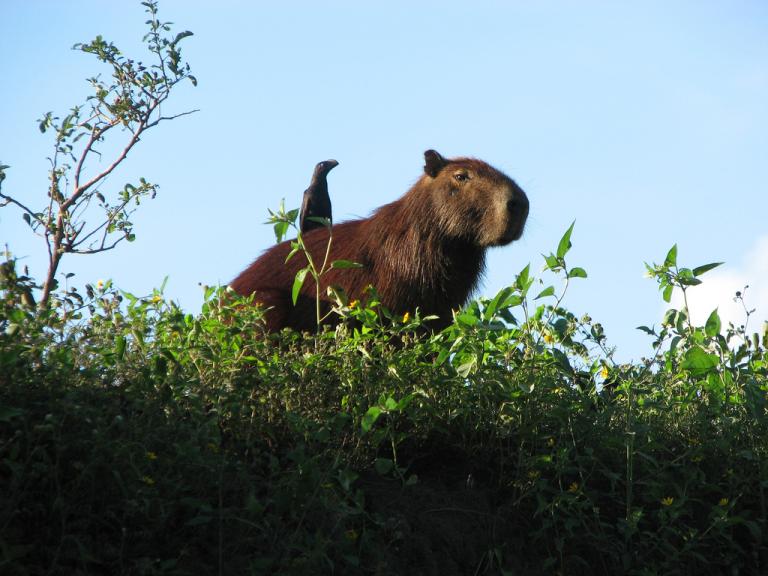 •  “The American Humanist Association is suing a New Jersey school district for its recitation of the Pledge of Allegiance in public classrooms. The lawsuit, brought on behalf of a local family in central New Jersey, asserts the mandatory recitation of the pledge is discriminatory against nonbelievers because it includes the phrase ‘under God.'”

This lawsuit is right on the legal question, but it may have a political downside, as it plays into the religious right’s enthusiasm for portraying atheists as “un-American” and unpatriotic. But then again, they’ll keep repeating that slur no matter what the American Humanist Association does, so maybe that doesn’t matter.

Such lawsuits always end up with the odd spectacle of the school district’s attorneys defending the phrase “under God” by arguing that it is meaningless — a cultural byproduct too vague and insubstantial to be considered a violation of the Establishment Clause. It seems odd that those who actually believe in God would find that argument something worth celebrating.

And while we’re on the subject, let’s say it again: The Pledge of Allegiance is creepy. Requiring children to recite a daily loyalty oath to their country is no different from requiring your spouse to recite a daily loyalty oath to you. It’s disturbing to think that anyone could mistake such a ritual for an expression of patriotism or any other form of love. Creepy, creepy, creepy.

• “There is not a single zip code in the entire country that favors the New York Mets.”

• Dan Haseltine of Jars of Clay recently posted a series of tweets in support of marriage equality. Good for him. Allow me to formally apologize for calling Jars of Clay “a poor man’s Live.”

April 24, 2014
Right-wing hero and welfare-fraudster Cliven Bundy is a big honking racist, but you probably already knew that
Next Post

April 25, 2014 Five sentences that contain the entire history and explanation of white evangelicalism in America
Recent Comments
0 | Leave a Comment
Browse Our Archives
get the latest from
slacktivist
Sign up for our newsletter
POPULAR AT PATHEOS Progressive Christian
1