Understand and absorb these five sentences and you can understand the entire history of white evangelicalism in America over the past 50 years:

In 1965 [Carl] Henry sent Frank E. Gaebelein to cover the march in Selma, Alabama. An associate editor of Christianity Today and the founder and headmaster of the Stony Brook School, New York, Gaebelein went to Selma and was so inspired that he wired Henry in Washington, DC, that evangelicals needed to join the march. But Gaebelein’s stories of the Selma march never saw the light of day. The resistance at Christianity Today was coming primarily from two people: J. Howard Pew, the Texas oil man and the financer of Christianity Today, and L. Nelson Bell, Billy Graham’s father-in-law and an editorial adviser at Christianity Today, who still had segregationist views. Pew and Bell did not want Christianity Today to speak out too critically against racism and capitalism, because they thought it would alienate important segments of the magazine’s constituency.

Henry did publish Gaebelein’s initial report from Selma, which ran in CT on April 9, 1965. Pew and Bell weren’t wrong — it did, indeed, alienate important segments of the magazine’s constituency. Gaebelein’s subsequent reporting was censored, so he took off his reporter’s hat and joined the marchers, participating in further demonstrations and voter-registration drives. 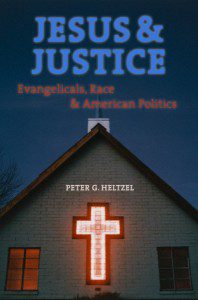 Most of the rest of white evangelicalism took the other fork in the road — the one preferred by the financier and the segregationist.

Pew and Bell are dead and buried, but their heirs still steer the ship. Gaebelein has his heirs, too, but they’re fewer in number and they’ve never had much influence.

What of Carl Henry, then? I want to admire him. He seems to have wanted to do the right thing and he even started to try to do it. He was on the right side in his power struggle with the money and the segregationist, but when the right side turned out to be the losing side, he stayed on — preserving his job and his post and his position of influence even when it turned out that influence could only be used in support of the money and the segregationist. And, well, that just isn’t something it’s possible to admire.

Still, we should be charitable to poor Henry. He was in a tough spot. A whole generation of white evangelical “leaders” have followed him in that very same tough spot, and very few of them have even tried, as he tried and failed, to do the right thing. Most of the people who have inherited his role of nominal leadership haven’t even had the courage to try to challenge the actual leadership of the moneymen and the guardians of white privilege. They’ve simply recognized — correctly — that this was a power struggle they couldn’t hope to win. Alienate the moneymen or those other “segments of the constituency” and you’ll only wind up getting Ciziked or Gaebeleined. Easier just to play along the way that Henry’s heirs are, even now, at this very moment, playing along.

April 24, 2014
You go down there once too often and you're likely to remain
Next Post

Made, Known, Loved: Developing LGBTQ-Inclusive Youth Ministry
A new book by Ross Murray A Review Ross Murray is well-known...
view all Progressive Christian blogs
What Are Your Thoughts?leave a comment
Copyright 2008-2021, Patheos. All rights reserved.
error: Content is protected !!