You want much more than I’m giving

• Winston Churchill’s mother had a tattoo. A snake tattoo.

• Randall Munroe is right to complain that this trick probably gets overused: 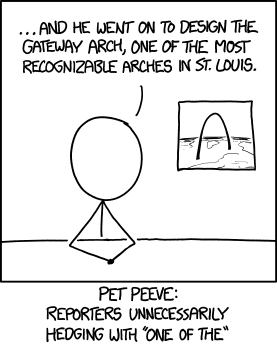 But that’s because copy editors know that superlatives are an easy way to wind up inserting unverified and incorrect facts into a story. See, for example, this superlative mistake in an otherwise fine post from Richard Bartholomew:

That would be Mike Warnke, author of the most shameless and grotesque bogus “memoir” in evangelical history.

A good copy editor would’ve caught that. Warnke’s fraudulent memoir was certainly shameless and grotesque, but can we be certain it was “the most shameless and grotesque … in evangelical history”? There are quite a few other strong contenders for that title, and no easily comparable quantifiable metric for shamelessness and grotesquery. How do we rank Warnke’s fraudulence against that of, say, Michelle Remembers, or against Benny Hinn’s autobiography? And while Warnke’s book was, indeed, a string of outrageous lies, he did write it himself — making it a  rare achievement in the field of evangelical celebrity autobiography.

A simple fix for the sentence above, of course, is Munroe’s pet peeve:

That would be Mike Warnke, author of [one of] the most shameless and grotesque bogus “memoir” in evangelical history.

• “Problem solved” is also what I thought was the case with Mike Warnke. He used to be a superstar in white evangelicalism, but I thought Mike Hertenstein and Jon Trott had ended that with their devastating and thorough exposé Selling Satan: The Evangelical Media and the Mike Warnke Scandal. But it turns out that being a proven liar isn’t a career-ender in white evangelicalism — not when those lies were told in the service of demonizing Satanic baby-killers. Here’s the substance of that post from Richard Bartholomew:

Many people were under the impression that Warnke had disappeared from public platforms after his exposure, but although he’s no longer an evangelical “A-lister” he’s maintained a presence on  the church speaker circuit, through his “Celebrations of Hope” ministry.

Turns out Rick Joyner, the guy promoting Warnke’s rehabilitation, is also a big promoter of fraudulent evangelical memoirist Kamal Saleem. Same shtick, except Saleem pretends to be an ex-Jihadist terrorist instead of an ex-Satanic high priest.

• I missed reading about this last month: “Students from around the United States will be visiting their congressional representatives today – Abstinence Day on the Hill [April 3] – urging them to ignore President Barack Obama’s call to defund abstinence education.” I suppose I’ll just wait ten years or so and then read all about it in the post-evangelical memoirs, blogs and National Abstinence Education Association survivor’s networks that will have sprung up by then. Poor kids.

Fischer was, as usual, just getting lathered up in a hyperbolic self-righteous fantasy, and when that happens he starts to describe the role-playing fantasy world he wishes he lived in rather than the reality he hates. In this world, he’s a hate-filled bozo with a fringe radio platform, but in the world of his fantasy, he’s a heroic lone voice defending righteousness against the armies of wickedness.

• But then there’s also this: You can be “fined for being a Christian” in Daytona Beach. “Living, behaving as a Christian … has now become a crime” in that Florida resort town. But that’s mainly because it seems that Daytona Beach’s police chief, Mike Chitwood, is a right-wing idiot who thinks that many homeless people “are homeless by choice” because they are “bank robbers.”

You’d think Debbie and Chico Jimenez would have become a cause célèbre for the religious right fundraisers who claim to be so concerned about “religious liberty.” But it seems that “religious liberty” is only for billionaire CEOs who want to deny health insurance for women, not for those who would celebrate a love feast by going out into the streets and lanes of the town and bringing in the poor. The difference, of course, is that the former is prohibited by scripture, while the latter is commanded by it.