Postcards from the culture wars (5.21)

“I think we got off the track when we allowed our government to become a secular government, when we stopped realizing that God created this nation, that He wrote the Constitution, that it’s based on biblical principles.”

“You’re trying to infringe on my right, because I don’t believe that.”

“The ruling is about the privilege of the majority, the privilege to define your own beliefs, traditions, and practices as simply the water in which we all swim. If you’re in that majority, you tend to be shocked when anyone even questions whether those practices ought to be imposed on everyone and sponsored by the state.”

“That, or they will continue to reshape the definition so that it will describe exactly (and only) what they believe.” 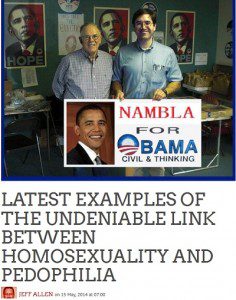 “[Sabine Parish Superintendent Sara] Ebarb advised that C.C. should either change his faith or be transferred to another District school where ‘there are more Asians.'”

“You, as a person of faith, are especially at risk because your values and beliefs are standing in the way of the goals of this growing lawlessness.”

“He knows more about the Founding Fathers than George Washington does.”

“We had victims say things like, ‘He was Christian, of course I would believe him.’”

“What this PG comedy lacks in cursing, it also comes up short on plot, character development, originality, and overall pleasure.”

“A shrill feature-length sitcom for the faith-based family values crowd, if nowhere near as good as that sounds.”

“Sundays are the worst.”

“While it was suing the government, Hobby Lobby spent millions of dollars on an employee retirement plan that invested in the manufacturers of the same contraceptive products the firm’s owners cite in their lawsuit.”

“I think of this Western Hemisphere, all of it, as the domain of, as Churchill described it from this hemisphere, Western Christendom; the foundation of Western civilization, Judeo-Christianity; the values that come from the Old and New Testament; the values that Christopher Columbus brought here across the ocean.”

“When leaders and members of the Religious Right go looking for heroes of religious freedom, they don’t turn to Roger Williams, Thomas Jefferson, James Madison, or even the Baptist preacher John Leland. They turn to Constantine the Great.”

“It has been said that the Gettysburg Address was the most famous speech in American History, but that it would have carried more weight if President Lincoln was referencing the brave Confederate soldiers who were fighting against big-government tyranny.”

“Was William Lloyd Garrison not a ‘man of his time’?”

“Is it constitutional, the Civil Rights Act? I wish I could answer that 100 percent.”

(Yes, I posted that video previously, but it’s too perfect not to post it again.)

May 22, 2014 You had better do as you are told. You better listen to the NRB.
Recent Comments
0 | Leave a Comment
Browse Our Archives
get the latest from
slacktivist
Sign up for our newsletter
POPULAR AT PATHEOS Progressive Christian
1