This ecclesiastical power doesn’t come from apostolic succession, or from some form of congregational democratic church polity. Nor does it come because they teach as one having authority, astounding their hearers as Jesus did in his Sermon on the Mount. The NRB has bishop-like authority because it is an industry trade group for a large and lucrative industry. Or, in other words, because money.

That money provides a powerful platform and it decides who may and may not speak from that platform — from the pulpits of “Christian” brand radio and television. 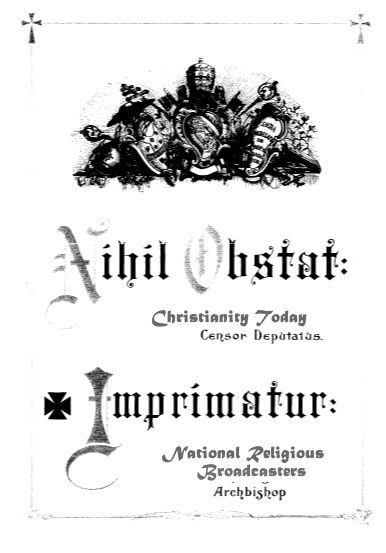 NRB is, in other words, a gatekeeper. It is, in some ways, the gatekeeper for the white evangelical tribe. It controls the spigot determining the flow of money, attention, awareness and, above all, permission.

The word “imprimatur” is inescapable when discussing this granting of permission. That comes from the Latin for “let it be printed.” It’s Latin because it’s an old-school Roman Catholic word, originating in the hierarchical pre-Reformation world of political popes and bishops. That hierarchy had to approve of anything that was written. The censor liborum would grant an imprimatur if he determined that the material was acceptable — that it would not “harm correct faith or good morals,” meaning, among other things, that it would not undermine or jeopardize the continuing authority of the hierarchy.

That role — granting or refusing the official imprimatur — is the role of the tribal gatekeeper. And that is a key role of the NRB in white evangelicalism.

Don’t be misled by that name — National Religious Broadcasters. The NRB’s influence doesn’t only extend over radio and television. It also extends to mission organizations, charities and, yes, books — publishers and publishing houses.

A leading Christian book publisher has resigned its membership in the National Religious Broadcasters (NRB) after a dispute over God and the Gay Christian, a new book published by an affiliated imprint.

In a letter to board members, NRB president and CEO Jerry Johnson said that employees of WaterBrook Multnomah Publishing Group, the evangelical division of Penguin Random House, worked on the book. The book, which argues that same-gender sex is not sinful, was published by Convergent Books, a 16-month-old Penguin Random House line that describes itself as “publishing books for progressive and mainline Christians who demand an open, inclusive, and culturally engaged exploration of faith.”

“Unfortunately, while the Multnomah Publishing Group is separate from Convergent, as a legal and business entity, the staff of the Multnomah and Convergent operations are substantially the same,” Johnson wrote. “Most notably, Steven W. Cobb serves as the chief publishing executive for both groups. … Other Christian workers do so as well. … This issue comes down to NRB members producing unbiblical material, regardless of the label under which they do it.”

Matthew Vines’ book about the Bible has been officially classified as “unbiblical material.”

The person making this official classification was NRB president and CEO Jerry Johnson — a lobbyist and the head of an industry trade group.

This is the magisterium of money.

This is brazen Simony. “May your silver perish with you, because you thought you could obtain God’s gift with money!” the Apostle Peter said to Simon Magus. “You have no part or share in this, for your heart is not right before God. Repent therefore of this wickedness of yours, and pray to the Lord that, if possible, the intent of your heart may be forgiven you. For I see that you are in the gall of bitterness and the chains of wickedness.”

There’s one big difference, though, between that story in the book of Acts and what the NRB is doing: The NRB has a lot more money than Simon Magus ever did.

Vines’ attempt to engage the Bible, to interpret and understand the Bible, to honor and submit to the Bible, has been officially denounced as “unbiblical” because it undermines Jerry Johnson’s ability to control the Bible.

So, then, what does Jerry Johnson regard as a proper and correct approach to the Bible? What does Johnson and his NRB think constitutes “biblical material”?

Well, just look at who the NRB decided to honor with its Board of Directors Award this year. The NRB insists that this is a prestigious honor, one carefully considered and granted only to those who embody the “biblical” values of the organization:

The NRB Board of Directors Award honors a Christian who demonstrates integrity, displays creativity, and makes a significant impact on society. In recognition that broadcasting is not the only way to witness to the power of the Gospel, the award winner may or may not be in the field of electronic communications.

So who best embodies the NRB’s vision of “integrity” and “the power of the Gospel”? Todd Starnes.

This is the same Todd Starnes about whom Alan Noble wrote this, months before NRB announced he would be the recipient of its most prestigious honor:

Some lies and some liars need to be called out. And when a liar identifies with my community – conservative evangelicals – and tells lies to my community repeatedly and without apology, influencing hundreds of thousands of people, that needs to be addressed.

Last week, Todd Starnes at FOX News published two articles on anti-Christian discrimination at Veterans Administrations hospitals this Christmas season. In both reports, Starnes lies and tactfully omits facts in order to deceive his audience, creating the impression that the government is at war with Christmas.

Starnes is a FOX News radio host, columnist, author, and a frequent guest on FOX and Friends. But he’s best known for his articles on FOXNews.com, where he reports on the culture wars, focusing on how Christians in the US are under persecution by the State or atheists or the homosexual agenda. As you can imagine, this theme is very popular with readers. His Facebook Page has over 112k followers and his articles regularly receive more than 10k Facebook interactions. In fact, his piece last week on banned Christmas cards has over 24k likes, so far. Additionally, Starnes is cited and shared by notable Christian figures. When Starnes reports on an event, he will influence the way a lot of people think.

To complicate matters, Starnes is an extremely outspoken Christian. His faith is an essential part of his public image. Each morning he tweets out a verse from the Bible, and he regularly comments on issues from a distinctly Christian perspective. He is a Christian reporting to Christians about persecution against Christians.

Starnes’s wide influence on evangelicals is alarming because he consistently deceives and manipulates facts in order to exaggerate or fabricate incidences of Christian persecution. These reports influence a great deal of people who often respond with hatred, anger, and disgust out of ignorance.

Deception, distortion, manipulation and lies, all designed to instill “hatred, anger, and disgust.”

In a sense, then, Todd Starnes was the perfect choice for the NRB Board of Directors Award. Who better embodies the sanctimonious Simony at the core of its mission?