Soon it will banish the dark

• Further evidence that Texas “Baptists” have more in common with medieval Spanish cardinals than they do with Roger Williams:

• Glenn Spencer is the hate-group leader who leads the hate group called American Border Patrol, which is a hate group. That can’t be said often enough.

• In noting my dismay that proven fraudster Mike Warnke is once again making a living on the Christian speaking circuit, I focused mainly on his shameless grift of claiming to be an ex-Satanic high priest. I should also note something just as unforgivable: Mike Warnke was a habitual joke thief. (Yes, in the video linked there, he’s stealing from George Carlin.) That’s pretty low.

• Here’s some further evidence in support of the Petroleum V. Nasby theory of American politics. Nasby was driven by the fear that “they” may someday have a majority, and then, “If they get mean enough, tyrannize over us even as we are tyrannizing over them.”

That’s the heart of a lot of what we’re seeing — the fear that if “we” don’t successfully suppress LGBT people, blacks, women, immigrants, Muslims, atheists, etc., then they will seize power and suppress us. This isn’t so much an absence of empathy as it is a failed attempt at empathy. In trying to see things from others’ perspective, all they can imagine is that those others must be playing the same Hobbesian game of king of the mountain that they’re playing themselves.

• Franklin Graham’s odious opportunism during the recent World Vision-centered spasm of tribalism was so bald-faced and shameless that at first I missed this. Phineas Hophni Graham has also taken to teaching that our “salvation is based entirely upon God’s Word.” This is a novel theory of atonement — justification by biblical inerrancy.

Bad news for Peter, James, John, Mary, Martha, Paul, Silas, Irenaus, Clement, Ignatius, Polycarp, Tertullian and every other so-called “Christian” who lived prior to the canonical consensus that eventually developed. They didn’t have the Bible to save them so, obviously, they’re all damned.

• Always check the per-unit price when shopping at Target. (And everywhere else, for that matter.) 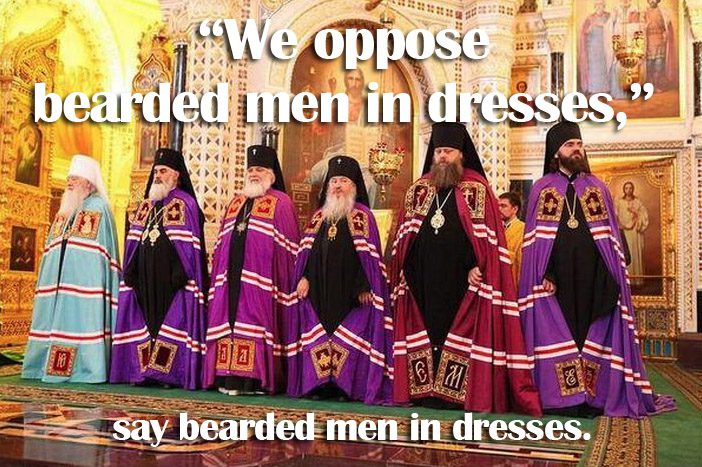 • “Bible prophecy scholars” have their own “scientific” consensus: “After almost a half of a century spent studying and teaching on the prophecies of the second coming of Christ I can say with absolute confidence that this world does not end because of global warming or man-made climate change. It does not play into the prophecies of the last days at all.” OK, then.

• The Benham family wants to make it clear that Flip Benham never stood outside a mosque chanting “God hates Muslims!” That would have been belligerent and extremist. What actually happened, the family insists, is that Benham organized and led a protest outside a mosque and then whipped the crowd into such an anti-Muslim frenzy that they began to chant “God hates Muslims!” while he looked on approvingly. Completely different from those scandalous rumors that Benham was chanting that himself.

• I don’t entirely disagree with this suggestion from Rick Santorum. And I should also thank my former senator for recommending Judge Jones. Twice over, I should thank him.