The fallen architects of a failing enterprise

The fallen architects of a failing enterprise August 9, 2014 Fred Clark

• “Basically, it seems to be really hard to write a song about body acceptance that’s actually about accepting all bodies.”

• James McGrath notes that some Patheos readers may have trouble with their RSS subscriptions after our recent upgrade. Simply resubscribing seems to fix this. Let me know if that doesn’t work.

(Yes, that last sentence was apparently directed toward readers who, by definition, are unable to read it.)

• McGrath also had some fun making Martin Luther pseudo-memes. Here’s my variation on the theme: 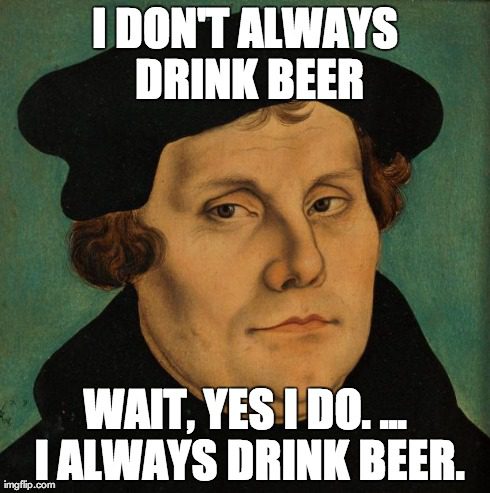 • Saw this story in several places, but the subject deserves the kind of treatment it gets from Wonkette:

First, if you as a customer do not feel that you can afford to pay an extra 35 cents on top of your bill so that your server can earn a minimum wage, you are probably an a–hole and everyone in the service industry would probably be better off if you prepared your meals at home rather than going out in public to eat.

Second, if you as a Job Creator want to show your customers that YOU are in fact an a–hole, this is a great way to do it!

• And also to the Greek: Emily A. Filler offers a useful reminder that it’s possible — and morally necessary — to contend with the abominations of Leviticus without drifting into supersessionist theology and anti-Semitic implications.

Also, too, though, here’s a reminder from self-proclaimed “Christian” Victor Sadet of Delta Township, Michigan, that we really, really do need some way of contending with those abominations: “God’s law — Leviticus! Leviticus! — you should be put to death!“

• Hey, look, it’s another one of those articles by librul feminist types trying to stop an injustice against pregnant women. And here’s what the big “Pro-life” groups have to say about this issue: …

August 8, 2014
Let's all watch the trailer for the new 'Left Behind' movie
Next Post