Let’s all watch the trailer for the new ‘Left Behind’ movie August 8, 2014 Fred Clark

First, let’s all watch the new trailer for the Left Behind reboot.

1. The first thing we hear, the first thing we see, is a ringing telephone. This is as it should be. Yet we never see Buck Williams using his favorite thing in all the world, which is a big departure from the book.

2. There are many departures from the book to notice here — the Rapture of co-pilot Chris, for example. That’s a nice change from his fate in the book, where his family gets Raptured, he gets left behind, and then commits suicide. That also lets the movie somehow arrange to have Buck Williams in the co-pilot’s seat for the big Emergency Landing scene. (You know, because when the co-pilot disintegrates mid-flight, the standard procedure is to get on the PA and ask if there’s a journalist on-board.)

3. There will be a big Emergency Landing scene. That’s Old School. Tension-filled Emergency Landing scenes were once a staple of movies and television. Even Laverne & Shirley once had to land a plane. Airplane! effectively ended that, but it looks like Vic Armstrong is hoping to bring it back. (And now I’m mentally recasting this movie with Leslie Nielsen as Rayford and Robert Hays as Buck. …) 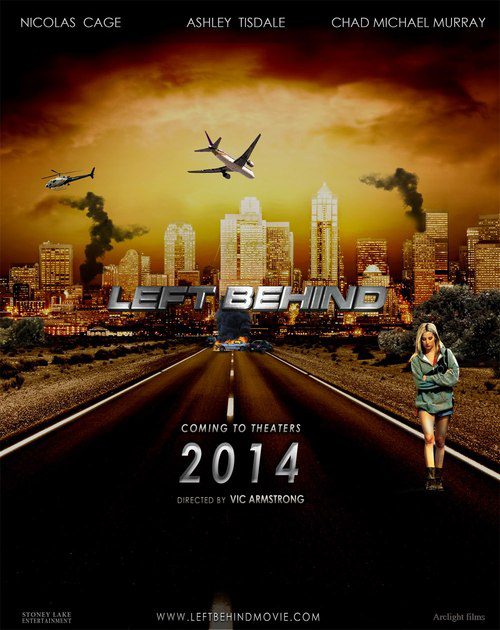 This can’t possibly be Nic Cage’s first Emergency Landing scene, can it? I saw Con Air, but I’ve repressed all memory of it, so I don’t remember if he was ever at the controls of the plane in that one.

4. The bit with the “The End Is Near” sign altered to read “The End Is Here” is borrowed from several earlier apocalypse movies, some of which involved zombies. American pop-culture has served up more than a century’s worth of popular “Bible prophecy” apocalypse fantasy adventure stories. And for the past 50 years, we’ve had a cornucopia of zombie apocalypse adventure stories. What’s lacking, of course, is a good zombie-apocalypse/”Bible prophecy”-apocalypse mash-up.

In this trailer, it seems to me, the zombies should make their first (sudden and violent) appearance right in the middle of Bruce Barnes’ lecture to Chloe about how everything is unfolding just the way the Bible foretolllllllgggh (Chloe flees as zombies consume poor Bruce).

5. That Bruce/Chloe scene sets up a possible reprise of one of the worst flubs in the book. The trailer shows Cassi Thomson’s Chloe raising the objection that the horror show of death and destruction raining down on humanity seems incompatible with the loving benevolent God her mother taught her about. Book-Chloe raises this same objection, and I was pleasantly surprised to see it there.

This is a substantial theological critique of Tim LaHaye’s “End Times” mythology — that it denigrates the character of God as revealed in Jesus Christ. It surprised me to see LaHaye and Jerry Jenkins acknowledge this objection and I was eager to read how they would respond to it. But then they never responded to it. In the book, Bruce never has an answer to Chloe’s objection. Chloe never gets an answer from anyone, she just kind of … drops it.

I’m actually intrigued to see if the movie will follow the book, dismissively shrugging off this objection without explanation, or if the film will actually attempt a response to Chloe’s point here. I’m not hopeful, though — Bruce’s “He took them to protect them …” line is just horrifying on so many levels.

6. I’ve learned a lot from the book Left Behind about How Not To Write. The scene of a school bus falling off a bridge in this trailer has much to teach us about How Not To Use Slow Motion and How Not To Switch Angles Away From The Character’s Perspective.

7. Perhaps the most absurd and hateful single thing about the book is the way it disintegrates every single child on the planet, then completely ignores that, portraying every character in the story completely ignoring that as well. Every parent, sibling, aunt, uncle, grandparent, teacher, mentor, neighbor, coach, etc., on the entire planet has just lost every child they know, but no one grieves over this for more than, say, 12-24 hours. It changes nothing. It changes no one. It’s one of the most astonishingly inhuman accomplishments in all of literature.

The trailer offers a brief glimpse of a weeping woman in an empty hospital maternity ward. “It’s all over the world” she says.

So will the movie acknowledge this? It can’t, really. Acknowledging the effect of a suddenly childless world would involve more than a few tweaks and adaptations to the plot and the characters in the book. It would require a completely different story about completely different people.

8. I’ve really dropped the ball on Left Behind posts here of late, for which I apologize. (Excuses would include a few months of full-time work at the store and all the graduation/admission busyness with Y.D., but you don’t need to hear excuses.)

Let’s set a firm date and mark our calendars. Nicolae-blogging will resume on Tuesday, Sept. 2. Pinkie-swear.

9. It seems that all the links are broken in my Left Behind indices. I’m working on fixing that while I do the massive cut-and-paste project of attempting to turn some of this into some form of e-book-type-thing that won’t run afoul of the copyright lawyers at Thomas Nelson.

August 8, 2014
The tongue of flame is stuttering
Next Post