God disguised as men in dark shirts and masks

• “I’m frightened all the time …” This is brilliant and hilarious and very well done.

Sounds like Huppenthal could have a bright future at Mars Hill Church.

• No, Missouri Highway Patrol Captain Ron Johnson is not a gang member. But Reformed Pastor John Piper is hardcore. 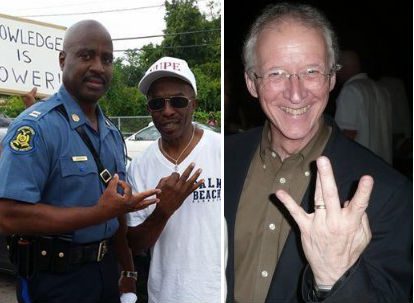 • Ted Alexandro has a good bit about becoming a godfather and having to renew his baptismal vows:

They start firing questions at you: “Do you reject Satan?”

“And all his works?”

Familiarity with all of the devil’s back catalog is no longer an issue in the Church of England baptism liturgy. They’ve ditched the name-checking of Satan for  more general vow to “turn away from sin” and “reject evil.”

• The EEOC and the Obama administration offered clearer, stronger guidelines last month protecting pregnant workers from discrimination on the job, discrimination in hiring, and discrimination when they return after a pregnancy.

Every single principled and consistent “pro-life” organization and spokesperson praised the administration and the EEOC for this move because, after all, they really believe what they say they believe. I mean, if those groups never spoke up to support the actual concerns of actual pregnant mothers, that would make it seem like they’re just a bunch of cynical partisan puppets masking misogyny with moralism, and obviously that’s not the case.

• When young-Earth creationist Ken Ham rejects the reality of deep time, he likes to snort, “Were you there?” Here’s Rachel Sussman joining Joe Hanson for a look at many of the amazing creatures that could answer, “Yes, in fact, I was there 9,000 years ago. …”

Progressive Christian
When the one-way ratchet goes local (and other...
slacktivist