In the world that’s ours for naming

• Apparently the “Louisville Purge” in the news recently was a social-media-fueled hoax based on those Purge movies. The rumor said the Kentucky city would have a night of legal lawlessness and mayhem last weekend, and people were worried enough that some public events were cancelled.

For me, though, whenever I hear “Louisville Purge” I always think of Al Mohler’s fundie takeover at Southern Baptist Seminary and his ushering out all of the female, black and/or otherwise “liberal” faculty members. 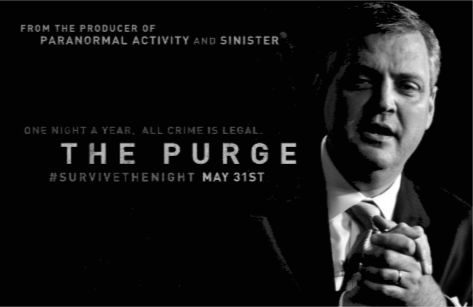 • Benjamin Corey maybe lays it on a little thick here — “Be Not Deceived: There’s No Such Thing as a ‘Christian Banker’” — but words ought to be a little wild, etc. His point can’t be restated often enough: The allegedly “liberal” or “progressive” interpretation of the Bible advocated by gay-affirming Christians is nothing more than asking our fellow Christians to interpret a few passages about sexuality in the same way they are already interpreting more than a thousand passages about money. (If anything, our take on those allegedly anti-gay clobber-texts is more respectful and cautious than their take on any of the many passages about usury.)

• Wislawa Szymborska: “Nothingness unseamed itself for me too. / It turned itself wrong side out. …”

• The Doctors of WHO say: “Improvements in breastfeeding could prevent the deaths of 800,000 young children every year. It is the most effective strategy we have to protect babies’ lives.”

• A reminder: the Hobby Lobby ruling had to do with a federal statute, RFRA, which does not apply to state law. The Wisconsin Office of the Commissioner of Insurance is thus either stupidly mistaken or baldly lying when it said Hobby Lobby “supersedes state statute.” It doesn’t. It can’t.

• On the whole question of “allies” and “cookies” and folks who seem to need a pat on the head just for not doing the wrong thing, I like the approach by Adrienne K. at Native Appropriations. Her list of supporters/allies who have “spoken out against the [Washington football mascot]” includes several names marked by asterisks. This indicates “kinda weaksauce support, like ‘I’m on the side of doing what’s right’ or ‘I’d think about changing it,’ not necessarily explicit THE NAME IS RACIST kinda thing.”

• Bob Smietana and Hemant Mehta on fact-checking sermons. (I gotta go with Hemant on this one. The wise man builds his house upon the rock — not on stories that are “too good to check.”)