‘You have to keep scooping out of the boat’: More on progressive Christianity and sin

Alfred Hitchcock’s Spellbound is a Hollywood classic. It’s got Ingrid Bergman, Gregory Peck and dream sequences designed by Salvador Dali — what’s not to like?

Well, plenty. Because Spellbound is one of those psychological “breakthrough” stories that were popular in the ’40s and ’50s. And those stories just strike me as frustratingly dim. The problem, I think, is that they seem to confuse a diagnosis with a cure. The climax of these stories is always the big breakthrough — the eureka moment in which the analyst suddenly shouts that the protagonist, for example, is unable to trust others because he was abandoned by his parents as a child. Yes, that’s it! Of course! 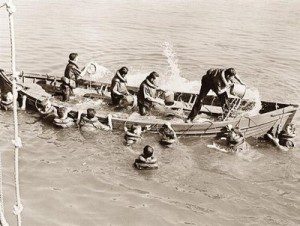 And then everyone celebrates as though they’ve solved the problem rather than just identified it.

The credits roll, but the poor bastard isn’t really much better off than he was at the beginning of the movie. He may have a bit more insight into the source of his problem, but his problem is still there and it’s still a problem.

Something similar to that can happen when we talk about sin, the spiritual bondage to the powers of death, injustice, evil, oppression and all that other Bad Stuff we Christians believe needs to be redeemed and transformed in ourselves and in the world. We can fall into that same trap of mistaking a diagnosis for a cure — of thinking that identifying the problem with great precision amounts to having solved it.

Knowing what the problem is doesn’t solve that problem. And in some ways it can make the problem more acute. (I think that’s part of what Paul was getting at in his discussion of sin, death, enslavement and the law in Romans 7.)

Earlier today, I argued that progressive Christianity offers a better theological understanding of what “spiritual slavery and bondage” entails than can be found in mainstream white evangelical Christianity.

My jumping-off point for that post was a discussion from Richard Beck, who responded in a comment here. Richard agrees that the “progressive” diagnosis is insightful and constructive. But he also highlights a potential danger in that progressive viewpoint — the danger that it can become a way of “mainly talking about the sins of other people.”

What he was trying to get at, he writes:

… was a personal vision of Christus Victor, how Christ might rescue me from my sin, as a liberal, as a progressive. Phrased another way, if you wrote another post how would you describe the spiritual bondage that liberals and progressive are enslaved to? That vision is what I find missing among progressives/liberals, a robust vision of their own spiritual bondage and slavery. And without that vision progressives have no need of Christus Victor theology. Conservatives surely need it, but not progressives. That was the issue I was trying to get at.

This is important. It highlights, for me, the greatest potential danger of the progressive/liberal/liberationist critique of injustice, oppression and enslavement to dark spiritual powers. And that, I think, is the danger of imagining that this critique is exclusively or primarily about “the sins of other people.”

Which is why I think the first thing to be said about “the spiritual bondage that liberals and progressives are enslaved to” is that it is the same as the kind of bondage that we progressive-ish-types are so good at identifying in conservatives.

This was powerfully argued in two insightful pieces I’ve excerpted here recently in some of those “Smart people saying smart things” posts. Neither of these is intentionally theological, but both are congruent with the progressive Christian understanding of enslavement to sin that we’ve been talking about here.

The first is from poet/blogger Scott Woods, in the context of his response to Ani DiFranco’s plantation pratfall and her initially graceless response to getting called out on it. Woods wrote:

Racism is an insidious cultural disease. It is so insidious that it doesn’t care if you are a white person who likes black people; it’s still going to find a way to infect how you deal with people who don’t look like you. Yes, racism looks like hate, but hate is just one manifestation. Privilege is another. Access is another. Ignorance is another. Apathy is another. And so on. So while I agree with people who say no one is born racist, it remains a powerful system that we’re immediately born into. It’s like being born into air: you take it in as soon as you breathe. It’s not a cold that you can get over. There is no anti-racist certification class. It’s a set of socioeconomic traps and cultural values that are fired up every time we interact with the world. It is a thing you have to keep scooping out of the boat of your life to keep from drowning in it.

That’s not a theological analysis, but it lines up quite well with many of the theological views we discussed earlier — Reinhold Niebuhr’s understanding of original sin and of prideful self-deception, Walter Wink’s insights into the powers and principalities, etc.

Woods is reminding us that we can’t ever congratulate ourselves on having arrived as one of the Good People who thereby become somehow exempt from the dynamics he’s describing. It’s not just other people — those conservatives over there — who are subject to these insidious snares. It’s also me, you, Ani, and all the other righteous babes with all the best of intentions.

Mychal Denzel Smith wasn’t thinking in explicitly theological terms either when he wrote about “Sexism in the alt-lit community and a message for all us wanna-be male feminists.” But his essay, too, aligns with the same things we were discussing here under the theological rubric of “spiritual bondage to the powers of death.”

The unlearning of misogyny, sexism, and patriarchy is not done by standing on a proverbial mountaintop and shouting “I Am a Feminist.” You can’t purchase a bunch of “This is What a Feminist Looks Like” T-shirts and think you’ve got it down. You can’t be “good” just because you’ve declared yourself so.

… It’s not enough to separate ourselves out into categories of “good” and “bad,” “feminist” and “misogynist,” because too often the assigning of the label is mistaken for the work.

… It’s easy to pawn off misogyny and sexism to “those guys,” to proclaim you’re “not that guy,” and feel yourself clean. But if the problem were just “jocks” or “Pat Robertson,” it would be much easier to solve. The culture of male entitlement is pervasive, and it doesn’t miss you just because you opted to pick up Audre Lorde and Gloria Anzaldúa rather than a football and a Bible.

The deeper danger Smith highlights is much like the concern Richard Beck raises: the mistake of thinking that the problem exists mainly as a problem for other people and not for me, too. As a warning sign against this, Smith points to the story of a “hip alt-lit editor” who seemed to say all the right things, becoming “a man who believed himself ‘good’ and therefore absolved of the toxic sexist culture and therefore incapable of harm. And therefore, also, even more entitled.”

If we start to think that identifying the problem means we are “therefore absolved” of it, and “therefore incapable of harm,” then the next thing you know we’ll be putting down our buckets, imagining there’s no need to keep bailing.

And then we’ll drown.

A theological response to these un-theological discussions of sin might complain that neither Woods nor Smith seems to allow much room for grace or for sanctification. But I think they do. Grace, I think, is what taught our hearts to fear the waters flooding our boat — it’s what allows us to start scooping, and to keep at it. We couldn’t do that on our own. We can only do it because of grace (the grace of God, we Christians say, but also the amazing grace shown us by other people).

And sanctification, I think, doesn’t entail our being exempt or absolved or finished with the duty to keep bailing, but rather has to do with getting better at it — with a heightened awareness of the danger posed by rising water and a greater determination not to let it swallow us.

October 15, 2014
'Spiritual bondage to the powers of death': Why Screwtape should've read some James Cone
Next Post