Phlebotinum, young-Earth creationism and the willing suspension of disbelief

In the original Star Trek series, the title sequence included a stirring bit of narration that summarized the premise of the show:

Space: the final frontier. These are the voyages of the starship Enterprise. Its five-year mission: to explore strange new worlds, to seek out new life and new civilizations, to boldly go where no man has gone before.

That introduction captured the imagination because it was an invitation to a compelling story. At the same time, though, it reminded viewers of an enormous problem with that story. “Space: the final frontier” is really, really big. It’s far too big to get anywhere on a “five-year mission.”

Space is so big that we measure its distances in light years, or how far light can travel in a year. Even if there are strange new worlds out there in space — new life and new civilizations orbiting other stars — they’re too far away for us to reach within five years, even if we could travel at the speed of light (which we can’t). So Star Trek doesn’t work, as a story, unless it includes faster-than-light travel, which is impossible. 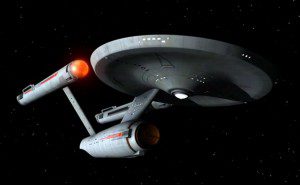 For Star Trek, the solution to this story-telling obstacle was “warp speed” — a way of traveling far faster than the speed of light. How does that work? Well, the warp drive warps space and time by mumblemumblemumble dilithium mumblemumble gravimetric field displacement mumblemumblemumble.

There’s a lot of mumbling in there because, of course, a functioning warp drive has not yet been invented. The storytellers didn’t need to actually invent it. They didn’t need to produce blueprints and a schematic for such a hypothetical faster-than-light technology. All they needed to do was to assert its existence, providing just enough scientific-sounding technobabble for viewers to accept its existence as plausible and, therefore, to be willing to suspend disbelief enough to accept the stories they were telling.

The writers for Buffy the Vampire Slayer came to refer to such technobabble as “phlebotinum.” It may be magical or mystical, it may involve theoretical physics (or just something that sounds kind of like theoretical physics). It may involve the wondrous properties of kryptonium or of unobtainium, transdimensional wormholes, reversing the polarity of the neutron flow, an ancient prophecy or a mysterious artifact. The details don’t matter so much. What matters is the assurance that the phlebotinum, somehow, accounts for the unaccountable. Phlebotinum explains the impossible. Or, rather, it offers a deal in which we, the audience, accept the idea that such an explanation exists, in exchange for which we will allow ourselves to enjoy a compelling story without getting tripped up by the impossibilities it otherwise entails.

That can be a good deal for the audience, provided the story is any good. Why should we deprive ourselves of the enjoyment of a good story by allowing ourselves to get distracted by something like the inconvenient impossibility of faster-than-light travel? But, still, we do require that the storytellers give us something. Phlebotinum doesn’t need to be ironclad and fully explained, but the storyteller needs at least to nod in the general direction of the impossibilities involved, to acknowledge the difficulty they present and to reassure us that we needn’t worry about such things because phlebotinum.

This bargain — the exchange of phlebotinum for our willing suspension of disbelief — is conducted between countless storytellers and their audiences in the realm of science fiction, fantasy, horror, comic books, action movies, detective stories, etc.

Artwork in an Indonesian cave has been found to date back at least 40,000 years, making it the oldest sign yet of human creative art — likely pre-dating art from European caves.

Somebody stenciled paintings of their hands on the wall of a cave 40,000 years ago. And those paintings are still there. That’s awesome.

So the first thing the young-Earth creationists will say in response to this news is that the scientists dating the age of these cave paintings simply must be wrong. They’re just guessing and their guess is incorrect.

But, alas, the dating of these cave paintings isn’t based on guesswork or theory. It’s based on measurement, using uranium-thorium dating:

Though the paint itself cannot be dated, uranium-thorium dating can estimate the age of the bumpy layers of calcium carbonate (known as “cave popcorn”) that formed on the surface of the paintings. As mineral layers are deposited, they draw in uranium. Because uranium decays into thorium at a known rate, the ratio of uranium to thorium isotopes in a sample indicates how old it is.

The researchers dated 12 stencils of human hands and two images of large animals. Because they sampled the top layer of calcium carbonate, the uranium dating technique gave them a minimum age for each sample.

They found that the oldest stencil was at least 39,900 years old — 2,000 years older than the minimum age of the oldest European hand stencil. An image of a babirusa, or “pig-deer,” resembling an aubergine with stick-like legs jutting from each end, was estimated to be 35,400 years old — around the same age as the earliest large animal pictures in European caves.

Again, pretty cool. Unless you’re a young-Earth creationist, in which case you’ve got a big problem.

Click over to Answers in Genesis and search for articles on radioactive dating methods and you’ll find lots of phlebotinum — lots of articles explaining that such methods are unreliable because mumblemumblemumble gravimetric field displacement mumblemumble reverse the polarity of the neutron flow.

Do any of these articles actually make sense? Do any of them really disprove the reliability of things like uranium-thorium dating?

No, but that’s not the point. They don’t have to prove that such methods are unreliable any more than Gene Roddenberry had to prove that his warp drive was possible. Phlebotinum doesn’t need to be detailed and fully functional — that’s not what it’s for.

The purpose of phlebotinum is simply to allow the story to continue — to prevent it from getting derailed by the inconvenient existence of impossibilities and insurmountable realities. The purpose is to make the bargain with the audience: We, the storytellers, will acknowledge the existence of such impossibilities and, in exchange for this acknowledgement, you the audience will agree to suspend your disbelief so that the story may continue.

That bargain works for Star Trek, and for Buffy, and for Doctor Who and all the rest. It’s a good deal for fans of those stories.

But it’s not a good deal for fans of the story being told by young-Earth creationists because those story-tellers are making a different claim. They’re insisting that their story is true. A true story requires more than just the willing suspension of disbelief. A true story has to be believable. For a true story, phlebotinum won’t cut it.

When J.K. Rowling tells us that Harry Potter’s broomstick can fly because of magic, we’ll accept that bit of phlebotinum and agree to that bargain because she’s telling us a terrific story and we’re happy to go along for the ride. But Ken Ham is actually asking us to get on the broomstick and jump out the window. And before agreeing to do that, he’s going to need to tell us something more than just, “Trust me, it’s magic.”

October 21, 2014 Learn how to use my hands, not just my head
Recent Comments
0 | Leave a Comment
Browse Our Archives
Related posts from slacktivist