A radically un-radical, conservative call for ‘full acceptance of LGBT Christians in the church’

The really interesting thing about David Gushee’s* book, Changing Our Mind, is how very radical it isn’t.

What you have here is a conservative white evangelical ethicist writing a conservative evangelical book. Yes, it’s a book about how and why he has changed his mind about “the full acceptance of LGBT Christians in the church,” and that will be perceived by many of Gushee’s fellow white evangelical conservatives as some kind of dangerously revolutionary change. But what’s really striking about this book — adapted from a series of articles written for Baptist News — is how modest this adjustment turns out to be in its implications for Gushee and for the white evangelical church he’s addressing.

The message of this book is not “This Changes Everything.” Instead, Gushee takes everything he’s been saying all along about the church and about Christian sexual ethics, then acknowledges the existence of LGBT Christians, and says, essentially, “OK, same thing for them, too.”

Despite the title, he hasn’t actually changed his mind about very much at all. For the most part, his thinking hasn’t changed, but he’s expanded the circle to include millions of Christians he had previously excluded. The radical challenge his book presents to his fellow conservative white evangelicals doesn’t come from his exegetical discussions. The radical challenge this book presents, rather, comes simply from the acknowledgement that LGBT Christians exist and that they have the same dignity as children of God as any other members of the church.

The sixth chapter of this book is titled simply “Gay Christians Exist.” That’s a modest statement — nothing radical about it. But it has extremely radical implications for those who have staked their self-identity on the pretense that this modest statement can and must be forever denied.

Gushee describes several “forks in the road” in the development of his thinking, but this — “Gay Christians Exist” — is the biggest one. This was the realization that seems to have sparked all the rest of this book.

And it’s not really a change of mind so much as a change of sight. David Gushee came to see people he hadn’t seen before and, having seen them, was no longer able to deny their existence. In a sense, these sisters and brothers and others constituted a fact that he had not previously accounted for, and so he was compelled to account for them.

“The fact that I did not have a personal friendship with a gay or lesbian person before I came to Mercer University in 2007 certainly played a role in the near-total ignorance I brought to the subject,” Gushee writes in a section in which he also apologizes for his earlier complicity in the exclusion of LBGT people from Christian churches and families.

That’s toward the end of Gushee’s book. Nearer the beginning he writes:

My mind has changed — especially due to the transformative encounters I have been blessed to have with gay, lesbian, bisexual and transgender Christians over the last decade. One of them is my own beloved sister, who is dearer to me than words can say and who came out as a lesbian not long ago. Others are fellow church members. Some have been my students. Some were strangers who came looking for me and asking for a conversation by email, phone or over coffee.

The faith journeys and perspectives of these Christian friends vary in the same way. Some are liberal and some are conservative. Some are high church and some are low church. Some like hymns and some like praise choruses. They are just … Christian people, in all of their maddening and lovable diversity. Currently the most evangelistic friend I have is a gay Christian brother. He’s always out there sharing his faith. Another gay Christian friend is into pop apocalyptic writings like the Left Behind series, which I personally loathe. …

Meeting these people — recognizing that they exist, was the “fork in the road” that changed David Gushee’s mind. He goes on to look at numbers and statistics and other ways of documenting the sheer fact-ness of the existence of millions of LGBT Christians. And he documents the utter failure and falsity of the disastrous attempts to pray away the gay through misnamed “reparative” therapy or equally misnamed “ex-gay” ministries.

So. Then what? Once a church, or the church, accepts the very modest fact that “Gay Christians Exist” and cannot be un-gay-ified, what does that entail? 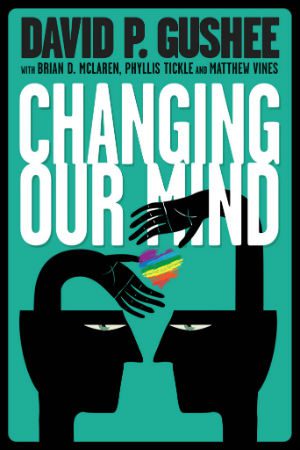 That brings us to a particularly helpful section of Gushee’s short book — his discussion of the practical implications for churches. Let’s say an unmarried, celibate LGBT Christian wants to join your congregation. Once you accept the reality of LGBT sexual orientation (and the unreality of “ex-gay” approaches), there can’t be any decent or acceptable reason not to embrace this new member wholly and fully as a participant in your fellowship just like any other. That doesn’t seem controversial or even complicated.

But, as Gushee notes, “Celibacy has always been an exceptional and rare calling in the Christian church.” Just as most straight Christians are not called to celibacy, so too most LGBT Christians are not called to celibacy either. Plus, as an ethics professor, he’s not satisfied with any theory that requires multiple sets of ethical principles — some of which apply only to some members of the congregation and others of which apply only to others. He lists an amusing variety of such potential half measures, explaining why each in turn is flawed, unsatisfying, and incapable of really accounting for the fact of LGBT Christians’ existence and presence and worth.

All of which points to his conclusion: The same rules, the same sexual ethics, should apply to everyone.

Like I said, this is a conservative book. David Gushee advocates a very traditional Christian view of sexual morality, and he wants churches/the church to apply that same standard to all Christians, regardless of sexual orientation. He doesn’t allow for any variation from what he calls a “covenantal-marital ethic” — permitting sexual acts only within the context of lifelong marriage.

Gushee’s conclusion reminds me of a scene in Edward Norton’s 2000 movie Keeping the Faith. Norton’s character, a Catholic priest, is getting quizzed by his childhood friend on “how the sex thing” works for him. “So you’re not gay?” she asks. He tells her no, “But even if I was the rules are the same.”

That’s what Gushee is advocating in Changing Our Mind — a church in which “the rules are the same” for all Christians, regardless of sexual identity or orientation. That’s the radically un-radical core of his message. And maybe also the un-radically radical aspect of it.

Changing Our Mind is thus not just a conservative book, but also a book for conservatives. That becomes very clear in his chapter describing the traditional “covenantal-marital ethic” he upholds here. This chapter is bound to strike progressives as not just traditionalist, but hidebound — unresponsive to, and apparently unaware of, the substance of many of the critiques of the form and function of this ethic.**

In his introductory chapter, Gushee writes of how his own experiences and study have led him to consider “fresh thinking about what Christian sexual ethics should look like.” Such “fresh thinking,” I think, is precisely what conservative evangelicals are afraid of, but I don’t think they actually have much to fear from this book.

“I have never asked whether the disciplined covenantal-marital standard in Christian sexual ethics should be weakened,” Gushee writes:

I am instead asking whether devout gay and lesbian Christians might be able to participate in the covenantal-marital sexual ethical standard— one person, for life, faithful and exclusive, in a loving, nonexploitative, noncoercive, reciprocal relationship, that is the highest expression of biblical sexual ethics — which, in fact, a goodly number are already doing. I can’t find a compelling reason to say no anymore.

The weird tribal dynamics that are already causing this book to be denounced as a “controversial,” radical, dangerous and un-biblical tract cannot change the fundamental fact that this is an eminently conservative argument in support of a sternly conservative Christian sexual ethic.

As such, I think this book also works as a good conversation-starter or conversation-furtherer for white evangelical congregations fretting about this “issue.” Changing Our Mind would be an excellent book to lend to a conservative American evangelical who’s struggling with what to think — or with how to think — about how to respond to LGBT Christians in their community. It’s a helpful, accessible starting point for those who are beginning to realize that the evangelical status quo of deny/ignore/exclude is unsustainable.

My favorite part of this book, though, is a discussion near the end of what Gushee describes as “transformative encounters and paradigm leaps.” This is the one bit that really might be as subversive and dangerous as Gushee’s inquisitors make it out to be. And I’m not just saying that because it’s here, at last, that Gushee’s argument finally arrives at the stories I love so much from the book of Acts. “God has shown me that I should not call anyone profane or unclean,” the apostle Peter says in Acts 10. But, as Gushee notes, Peter didn’t manage to learn this from the vision God sent him on the rooftop, he only truly understood it from his “transformative encounter” with the Gentiles themselves.

The same thing has happened time and again in the best moments of Christian history. An older or inadequate way of connecting the biblical dots gets shredded by transformative encounters with real human beings.

In precisely these encounters, many attest to the experience of God’s transformative Spirit.

This is how our minds can be changed — “transformative encounters with real human beings.” Such encounters, Gushee argues, are an experience of God’s Spirit at work.

And if that is what is going on — if God’s Spirit is at work and on the move — then the tribal gatekeepers frightened by this book have very good cause to be frightened indeed.

** Gushee even drags out the standard Cole Porter non sequitur, reliably imagining it to be an argument for or a response to … something. Ugh. Is this some kind of requirement in the evangelical ethics guild? Does every discussion of sexual ethics have to include a dismissively clueless reference to this “anything goes” strawman? … Wait. I feel a rant brewing, and that would be out of place in an otherwise positive book review post, so hold that thought.