Here’s that ‘Anything Goes’ rant about evangelical sexual ethics

This is a system with two, and only two, categories for considering whether any given sexual act or practice is good or bad, right or wrong, healthy or unhealthy, harmful or peachy-keen. It asks one and only one yes/no question: Are you married? In it’s simplest form, Libby Anne’s Two Boxes looks like this: 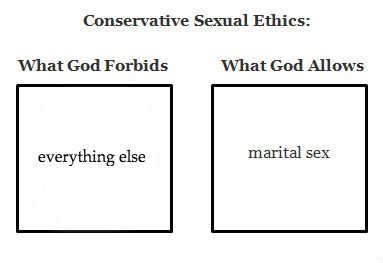 The long history of a Two Boxes approach helps us understand some of the confusion and reflexive terror that white evangelicals express in response to the possibility of marriage equality. They’ve trained themselves to think solely in terms of Unmarried Sex Is Bad and Married Sex Is Good, so the possibility of same-sex couples having good, God-approved married sex sets them scrambling, realizing for the first time perhaps that this Two Boxes system is woefully inadequate and can’t account for many of the ideas they’ve been trying to cram into it or to draw out of it.

In the realm of formal, academic evangelical ethics, things tend to be clearer and more sophisticated than the crude and clumsy Two Boxes approach that dominates at the popular level. But even these scholarly ethicists are at a disadvantage because it’s not easy to talk about a Christian sexual ethics within a tradition that, as Barry Taylor notes, has “very little sense of a comprehensive theology of sexuality.”

These scholarly evangelical ethicists are also up against the difficulty of having to, at least in some sense, work backwards. As I’ve said here before, “forbidden” and “not forbidden” are supposed to be the conclusions derived from ethical work, not the starting point.

Having said all of that, though, many white evangelical ethicists do manage to discuss sexual ethics in a way that is more meaningful, more practical, and more true, than the popular True Boxes approach. They clarify and qualify what they mean by the category of marriage, and why it is that marriage is for them a necessary condition, and what it is about marriage that provides and allows for this ethical significance.

My friend Dave Gushee has done this in a host of books and articles in which he fleshes out in more substantive ways the “covenental-marital” sexual ethic he references in his new book Changing Our Mind. The short chapter in that short book doesn’t give him much space to revisit that larger argument, but he nods toward it with a wall-of-adjectives approach, writing of: “the covenantal-marital sexual ethical standard — one person, for life, faithful and exclusive, in a loving, nonexploitative, noncoercive, reciprocal relationship.”

Those adjectives won’t allow for a clumsy Two Boxes approach that says all married sex is good because it occurs within marriage. Gushee’s description shows he needs more than just the category “Married” to conclude something is good. It also needs to be “loving, nonexploitative, noncoercive, reciprocal” among other things.

That’s good! But it’s undermined by his earlier discussion of supposed alternatives to this “covenantal-marital sexual ethical standard.” That discussion includes something that seems like boilerplate from some weird list of stock phrases that it seems the evangelical ethicists guild requires its members to insert in all such discussions.

The guild seems to have fashioned this mandatory boilerplate in the 1960s or 1970s, back when John Updike was publishing his earliest novels. And like an early Updike novel, it seems both moralistic and dated — far removed from any conversation that’s going on now.

Much of contemporary western culture would say: An appropriate sexual ethic is to do whatever you want to do sexually if it doesn’t hurt anybody who doesn’t want to get hurt while having sex — or perhaps, with a bit more refinement, if it doesn’t involve the exploitation of a minor or an impaired person or doesn’t risk pregnancy or disease. Let’s call this the mutual consent ethic. Other than that, anything goes.

Some, refining their ethic to a somewhat higher and more demanding level, would say: An appropriate sexual ethic is to find a person to love, and to restrict sex only to that person for as long as that relationship shall last. Let’s call this the loving relationship ethic.

Christianity has historically said: God’s plan for sexual ethics requires a man and a woman to make a binding lifetime marriage covenant with each other (before God, church and state, representing civil society), and to remain faithful to the promises of that covenant, including fidelity and exclusivity, until one partner dies a natural death. Let’s call this the covenantal-marital ethic. It bans all non-marital sex, infidelity, abandonment and divorce (with rare exceptions), making celibacy the only alternative to marriage.

Here’s the problem with that, and why it gives me the howling fantods every time I encounter this bit. The argument here is that the so-called “mutual consent ethic” is inadequate because mutual consent is not sufficient. The “loving relationship ethic” is also dismissed because it is not, by itself, sufficient. And then the covenental-marital ethic is commended as the only sufficient approach.

As we’ve already seen, Gushee’s own argument is better than this elsewhere. We’ve already seen that he believes — correctly! — that marriage, by itself, is not sufficient. That’s why that wall of adjectives was necessary: “loving, nonexploitative, noncoercive, reciprocal,” etc.

Notice what that list includes — what it has to include: mutual consent and loving relationship. The very things that got waved away earlier in the discussion turn out to be necessary after all.

The inadequate treatment of those things also muddles the claim that a conservative evangelical ethicist needs to be defending about marriage itself. That claim cannot be — as the wall of adjectives demonstrates — that marriage is a sufficient substitute for a sexual ethic, a la Libby Anne’s Two Boxes. The claim these ethicists need to be defending, rather, is that marriage is a necessary component for a credible Christian sexual ethic. It’s difficult to argue for the necessity of marriage in sexual ethics if you’re half-convinced that you’re trying to argue for the sufficiency of it.

I think the problem of this boilerplate language here comes from working backwards. Evangelical ethicists already know what the correct answer has to be, so it can be difficult for them to muster much patience to deal with any alternatives. Those alternatives thus can get caricatured and quickly dismissed in a way that undermines not just them, but the evangelical ethicists’ own arguments.

In the particular case of Gushee’s discussion here, I think he’d have been on stronger ground if he had engaged the actual substance of the competing ethical approaches. That might have allowed him to acknowledge that mutual consent cannot be dismissed just because it is not, by itself, a sufficient ethic. His argument would have been stronger if he had, instead, recognized mutual consent as a necessary, but not sufficient, component of any credible sexual ethic.

But that would involve deviating from the standard boilerplate that evangelical ethicists seem to have been stuck on for decades.

The most infuriating part of that boilerplate is this: “Other than that, anything goes.”

Feh. Another old friend of mine who is also an academic Christian ethicist recites this phrase all the time, always derisively. (Yes, I have multiple friends who are academic Christian ethicists. Welcome to my world.) “As long as its between two consenting adults, then anything goes,” he says, always as though he’s quoting someone. And yet he’s usually saying it in response to arguments from people who haven’t actually said that.

I’m sure that it’s possible, if we search hard enough, to find that some people actually are arguing “Other than that, anything goes.” The world is large and it’s possible to find some people actually arguing almost anything. So, yes, I’ll grant that someone, somewhere in 2014 is still clutching their first edition of Fear of Flying and discussing mutual consent as the end point, the whole, the sum, of sexual ethics. And they may even use the very same Cole Porter lyric that every evangelical ethicist loves to quote, insisting that, beyond mutual consent, “anything goes.”

They may glibly approve of affairs, betrayals, promise-breaking, and scaring the horses. They may shrug away the myriad forms of power imbalances that can coercively produce a veneer of mutual consent. They may have so little regard for personal safety that they insist there can be no valid negative response to the Beatles’ question, “Why Don’t We Do It in the Road?” because, hey, if there’s mutual consent, then “other than that, anything goes!“

But while it might be possible to find someone who is actually arguing that, it will be much harder to find anyone else who’s paying attention to them or who takes that argument seriously.

When mutual consent is discussed today, it is almost always held up as a necessary condition — a necessary starting point. That’s been true for more than a decade now and this discussion has been fruitful, constructive and insightful.

It’s frustrating, then, to keep tripping over this “other than that, anything goes” cliché, because it means that evangelical ethicists haven’t been listening to or participating in that discussion. They still only seem able to hear mention of mutual consent as some dusty Aquarian claim that it is the sufficient sum of sexual ethics. And so they respond dismissively, thereby apparently missing and dismissing the vitally important fact that any credible sexual ethic must include mutual consent as a necessary, essential ingredient.

That dismissal — particularly in its crudest, Two-Boxes form — can lead to some ugly ideas about wifely duties, treating marriage vows as a lifelong, irrevocable, unchangeable granting of perpetual consent. And that can get really bad, really fast.

When I encounter that dismissive stock phrase — “Other than that, anything goes” — I see an argument that doesn’t take consent seriously. And that makes it an argument I can’t take seriously.

That’s why I tend to be disappointed by my academic evangelical ethicist friends when I turn to them for “fresh thinking about what Christian sexual ethics should look like.” If you’re really looking for such fresh thinking, then one of the best places to turn these days is to the ongoing, incisive vivisection of evangelical purity culture that’s unfolding right now. This is happening mostly online in social media, and it’s being done, mostly, by young women. These young women may not have the academic credentials and institutional support of the professional ethics guild, but they respect the vital importance of consent, they’re wicked smart, and they have the advantage of not working backwards.

October 29, 2014
A radically un-radical, conservative call for 'full acceptance of LGBT Christians in the church'
Next Post