Hal Lindsey turns 85 years old today, something that Lindsey himself has spent decades telling us should never come to pass.

Lindsey’s 1970 book, The Late Great Planet Earth — a blockbuster best-seller — told us that the End of the World was nigh. And not just maybe a bit nigh-ish, mind you, but really, really nigh.

Lindsey made a fortune interpreting the signs of the times and explaining what it all means according to his premillennial dispensationalist “Bible prophecy.” And the signs were clear and undeniable, Lindsey said back in 1970. The Rapture was imminent. The End was near and could come at any moment. 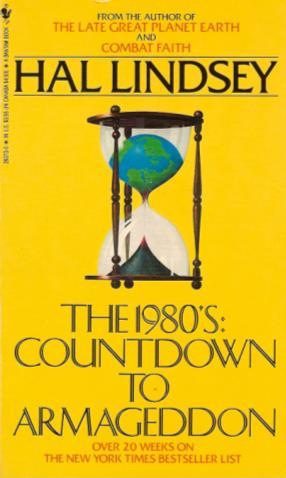 No one who read and believed The Late Great Planet Earth in 1970 would have expected that the world could possibly still be around on Hal Lindsey’s 85th birthday. The “countdown to Armageddon” had started, Lindsey told us — and that countdown wasn’t supposed to last for another 44 years.

Lindsey’s big selling point — the angle that made his variation of the usual “Bible prophecy” scheme stand out — had to do with the idea that the Rapture would have to come within one “generation” of the founding of the state of Israel in 1948. A biblical generation, Lindsey assured us, was about 40 years — maybe a very little bit longer than that, but surely not 66 years, which is how long it’s been by today, the 85th birthday that prophecy had prophesied Hal Lindsey could not possibly still be around to see.

I worry about Hal Lindsey’s financial security now that he’s midway through his 80s. Sure, he made a fortune back in the 1970s and 1980s — Late Great sold more than 29 million copies. But surely Lindsey couldn’t have invested all that money in long-term savings. After all, he spent his whole career insisting that there couldn’t possibly be such a thing as a long term remaining for this late, great planet and its inhabitants. If the 1980s were the “countdown to Armageddon,” then surely Lindsey’s financial planning wouldn’t have extended decades beyond the 1990s. That would’ve been absurd! It would have contradicted everything he’d ever written.

Lindsey’s admirers will likely celebrate his 85th birthday today without pausing to realize that this celebration disproves everything Lindsey ever taught them. The same thing happened in 2009, when admirers of the Scofield Reference Bible marked the 100th anniversary of that volume. And it will happen again next year, when Left Behind fans celebrate with a 20th anniversary edition of that novel.

Hal Lindsey turns 85 today. He told us that could never happen, but it just did.